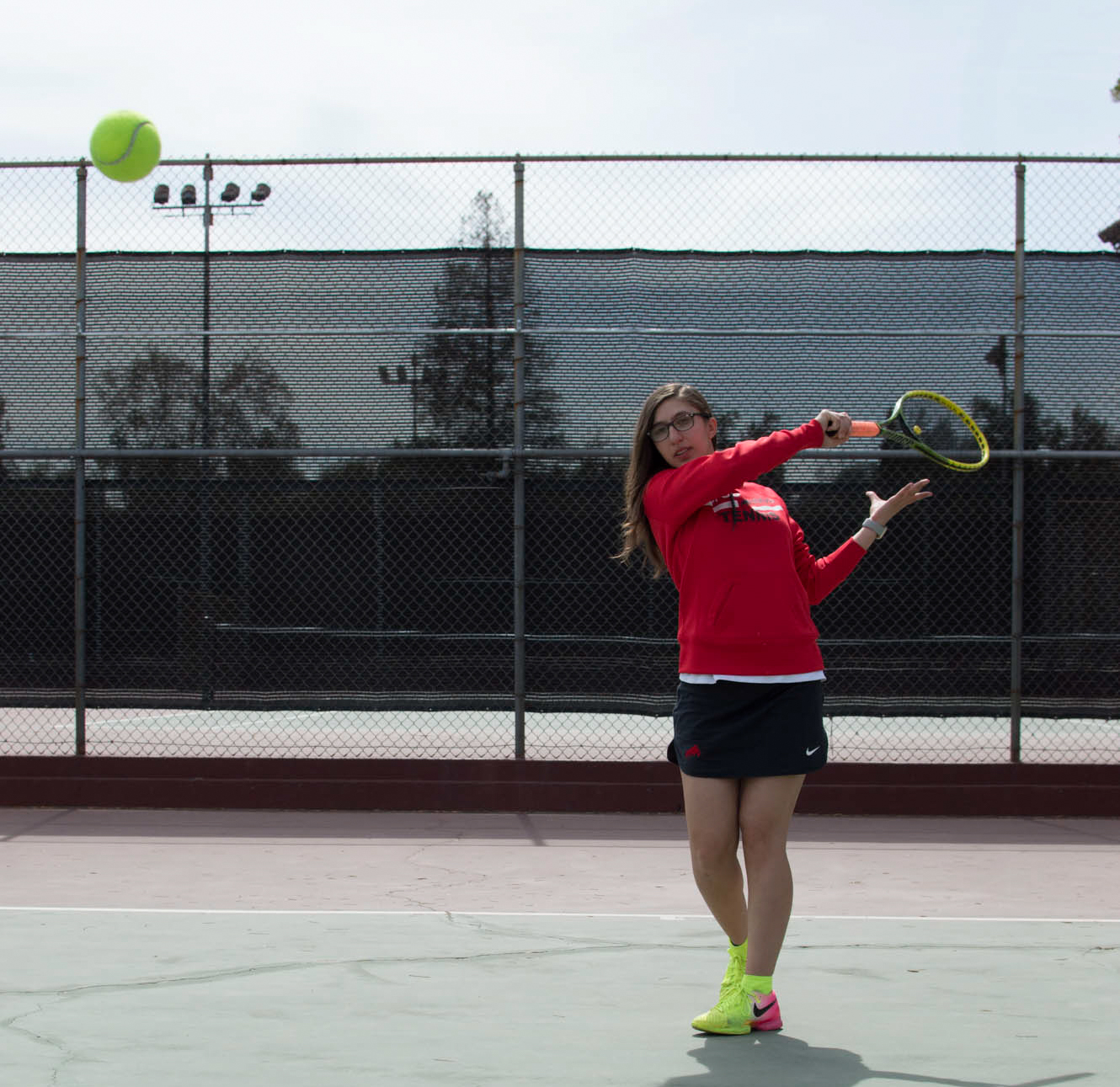 When she nervously walked onto the tennis courts, freshman Sowgol Sadeghi made history as the first woman to join an all-men’s sports team at Pierce.

“When I first came to Pierce, the only people I saw on the tennis court were eight guys and a coach,” Sadeghi said. “I asked them about it, but they said that there was no women’s tennis team here.”

In September, Sadeghi spoke to athletic director Bob Lofrano about joining the tennis team at Pierce. Though she was doubtful at first about being the only woman on a men’s team, Lofrano encouraged her to try it out.

“I think that day was the highlight of my life,” Sadeghi said. “I owe so much to Bob for helping make this all happen.”

Sadeghi moved to Los Angeles from Iran a year ago. She said that before she moved, she had been playing tennis for about six years after watching her oldest brother play. She also said that she was invited to play for Iran’s national tennis team, but didn’t take the offer because she was injured.

Before coming to Pierce to study biology, Sadeghi attended Taft High School for six months. While tennis is offered at the school, she said she didn’t play because she thought it was too late to join the team.

“If I don’t play tennis for a week or two, it messes me up mentally,” Sadeghi said. “Being away from it for six months was torture for me.”

When she was accepted onto the team, Sadeghi said she was very nervous about what her new teammates would think. After spending so much time with them, she said they have grown very close.

The camaraderie between Sadeghi and her teammates is clear to Lofrano.

“I don’t know if she has any brothers at home, but I know she now has six or seven brothers; her teammates,” Lofrano said. “They really take care of her.”

Sadeghi said that the biggest challenge she has faced so far is the pressure to keep up with the men on the team.

“When you’re a girl, people expect that the pressure is going to be less on you, but the best thing about our coach is that he doesn’t take any excuses,” Sadeghi said. “If I was going to join, I would have to do everything that the guys were doing with the same pressure.”

When the time came for head coach Long Dao to decide which team members would be playing this season, Sadeghi didn’t think she was going to get chosen. When she found out that she had been picked, she was excited and ready.

Dao said that when he first met Sadeghi, he kept an open mind before writing her off as a woman. He said that she brings something special and unique to the team.

“She puts in so much effort, sometimes more than the guys do,” Dao said. “She is a huge supporter of the team. You’ll hear her cheering for her teammates from the start of the game to the finish. She’s really part of the team, and she’s one of the guys.”

Sadeghi said that the pressure of being “one of the guys” has made her a stronger player.

“A lot of guys are stronger, so you put yourself in a position where you have to get better,” Sadeghi said. “There’s no other option.”

Sadeghi said she hopes to transfer to the University of California, Los Angeles and continue playing tennis.

“If I want to make it on their team, I have to work to make myself better and better every single day,” Sadeghi said. “And I see that happening by playing for Pierce.”

She said that she is proud and honored to be on the tennis team and hopes that her story will inspire other girls to join the team or form a women’s team in the future.

“It’s hard, but it’s not impossible,” Sadeghi said. “You just need to give it everything you have.”