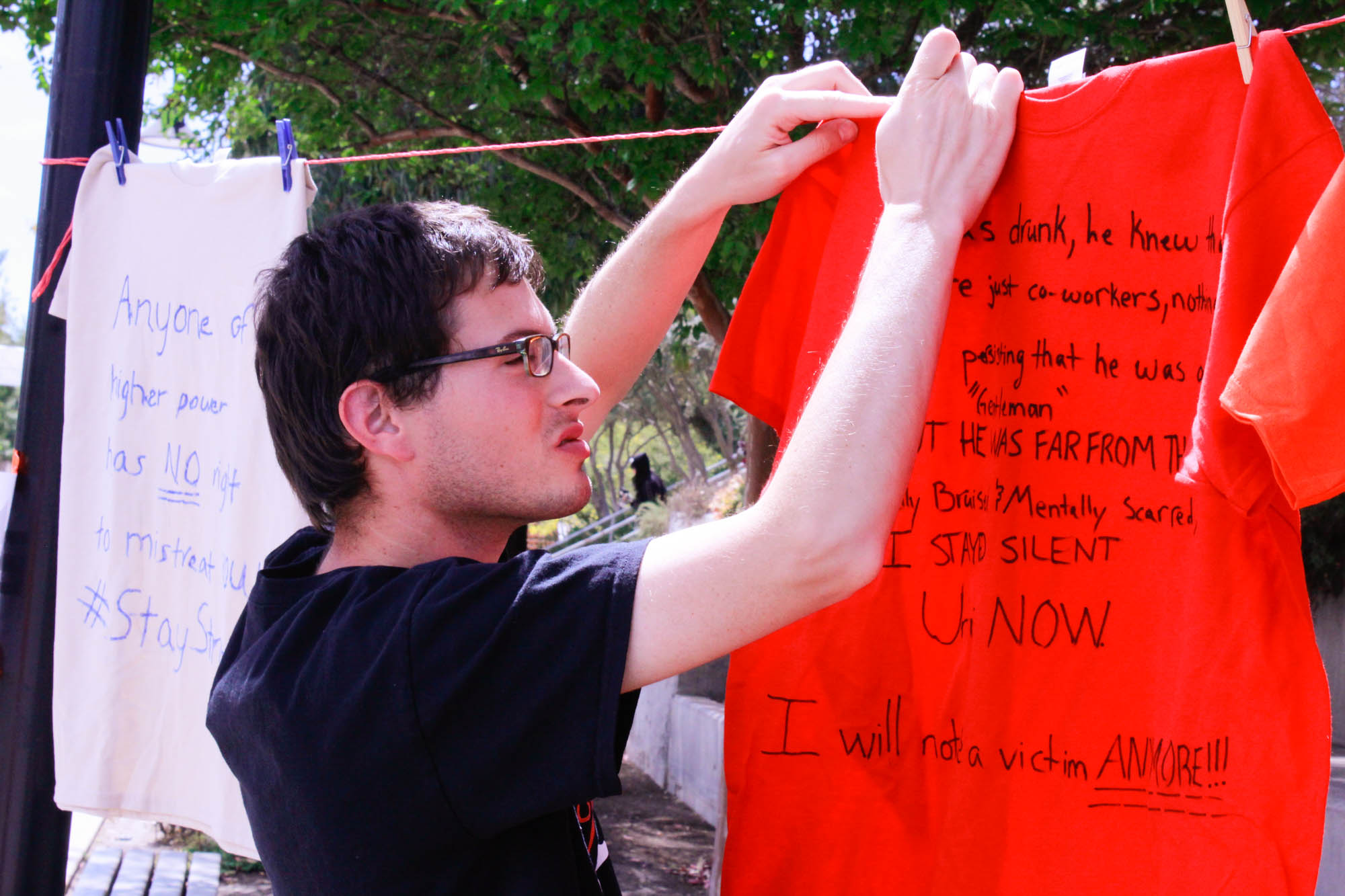 T-shirts of all colors floated in the spring breeze along the Mall on Thursday as Pierce commemorated Denim Day, an event that brings awareness to sexual assault.

An outlet of the Clothesline Project, Denim Day encourages students to wear denim as a stance against violence. It allows students to anonymously write down their experiences with assault on T-shirts and hang them on clotheslines for all to see and understand the widespread problem.

Denim Day was deemed an annual event by the California Senate and Assembly to protest the outcome of the 1998 Italian Supreme Court case in which a driving instructor was acquitted of rape charges because his 17-year-old victim was wearing tight jeans.

Holly Hagan, leader of the Campus Violence Response Team, is responsible for bringing the Clothesline Project to Pierce in 2004. The T-shirts have since been displayed twice a year along the Mall.

“Often, these stories are really hard for people to verbally say, but when they are able to write them down, it’s a lot easier and allows them some comfort,” Hagan said.

As a survivor of sexual assault and domestic abuse, Hagan is passionate about spreading awareness and warning signs by speaking in classrooms and sharing her story. She shared the story of a 19-year-old student who found peace after writing about her rape on a T-shirt; it was the first time she opened up about her experience.

“I believe that anything bad that happens to you is the best opportunity for growth,” Hagan said. “I always try to turn bad situations into something positive.”

Arakel Aristakessian, a Peer Education Specialist for Strength United, has also made sexual assault awareness and prevention his goal.

Crediting “hyper-masculinity” as a reason for sexual assaults, Aristakessian said, “In our society, men are typically socialized to be aggressive and violent, and we need to challenge our social norms. These events bring awareness to the issue, and they make people feel acknowledged and validated in their experience.”

Aristakessian said that if students want to get involved, conversation is key.

“A lot of people think that sexual assault prevention starts after something horrible has occurred, but it can begin much before that with something as simple as men challenging each other to realize why they’re catcalling and why they use derogatory language.”

“A lot of people feel embarrassed or ashamed about sexual assault, and it’s important for schools to provide this kind of comfort and support, especially since it’s such a big problem on college campuses. I think by doing things like this, Pierce is taking a stand against sexual violence.”

Denim Day will return in the Fall with a focus on domestic abuse.

To speak with someone who is trained to help, you can call the National Sexual Assault Hotline at 800.656.HOPE (4673).