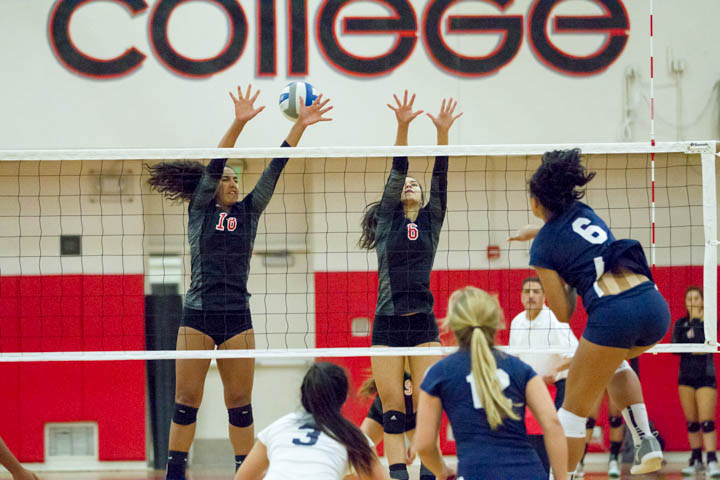 The Brahmas’ 8-game winning streak was snapped by the El Camino College Warriors in five sets to see their overall record drop to 18-6.

In the first set of the game,both teams were neck-to-neck, however, the Brahmas had difficulty keeping the ball inbounds, which eventually pushed the Warriors ahead. The Warriors claimed the first set 25-22.

Outside hitter Shari Volpis said that the errors made by the Brahmas in the early game contributed heavily to the Warriors’ victory in the first set.

“They didn’t win that set; we beat ourselves,” Volpis said. “We made 16 errors and gave them 16 points, but it was still a close set. We just needed to tighten up our game and cutback on our mistakes.”

The Brahmas were able to minimize the amount of balls they sent out-of-bounds in the second set and maintained a steady lead over El Camino.

Though the Warriors were able to keep up with the Brahmas, they couldn’t overcome them, and Pierce took the second set 25-21.

In the third set, the Brahmas once again maintained the lead against the Warriors, but  El Camino was able to quickly close the gap and tie the game at 24.

A failure to serve the ball over the net by the Warriors gave the Brahmas a point and possession of the ball, which they used to win the set 26-24.

El Camino established an early lead over the Brahmas in the fourth set which could not be overcome; at one point, the Brahmas trailed the Warriors by 14 points. The Warriors won 25-13.

“In a game like this, you just have to win the passing and serving battle. We didn’t that set,” Volpis said.

Middle blocker Cairo Harrell attributed the team’s performance in the fourth set to a loss of vitality in the late game.

“It’s just one of those things in volleyball where your energy gets really low and there’s not a lot you can do to get it back up, especially in a game like this—especially against a team like this,” Harrell said.

Throughout the fifth set, the Brahmas were able to gain leads over the Warriors, but couldn’t maintain them. Pierce and El Camino tied a few times in the set before the Warriors were able to overcome and won the final set 15-13.

Head Coach Nabil Mardini said that the loss wasn’t the result of any shortcoming of the team, and that the Warriors posed a challenge to the Brahmas that hadn’t been faced in their previous eight games.

“Setting decisions could have been better here and there, but we stuck to the game plan. The ball just didn’t bounce our way,” Mardini said. “El Camino was nothing like the other teams we beat, but we knew that going in.”

Cairo said that the team wouldn’t let the loss weigh on them, and viewed the game against the Warriors with good sportsmanship.

“It won’t affect our mindset going forward. It happens; you win some and you lose some, and this was a good game,” Cairo said. “It doesn’t matter that you win or lose, but how you win or lose. And, in going against a team like this, I think we lost the right way.”

The Brahmas are on the road in their next game against the Santa Monica College Corsairs on Friday, Oct. 27. The game begins at 6 p.m.