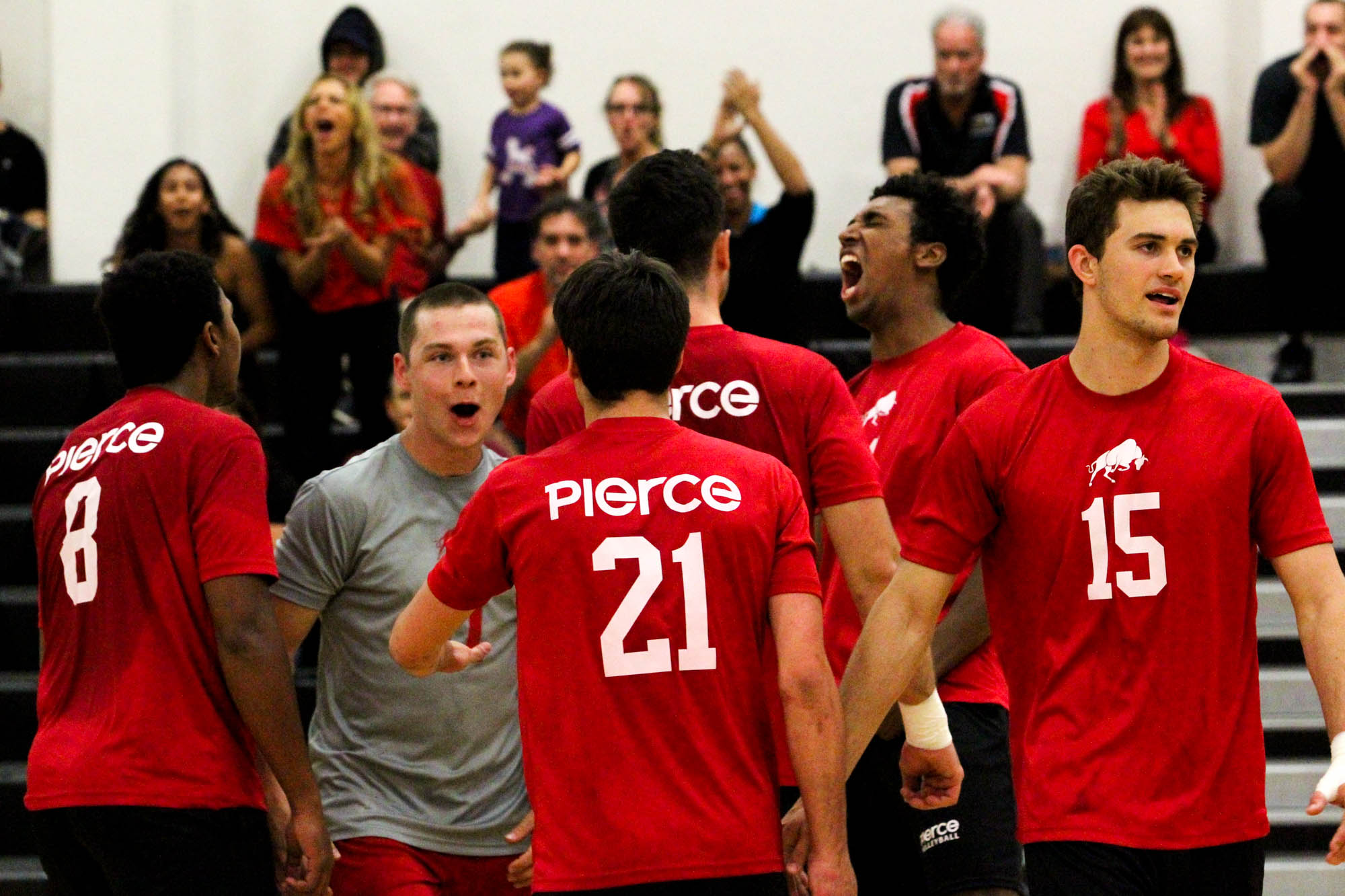 Men’s volleyball advances to the semifinals of the state championship to face the undefeated Long Beach City College Vikings after a straight set win over the Fullerton College Hornets, Friday night (25-20, 25-12 and 25-17).

The last time men’s volleyball were in the playoffs was in 2013 when Head Coach Lance Walker first took over the program.

Walker attributed his team’s success to the energy of fans in the gym Friday afternoon.

“We had alumni in the crowds, returning players, we had family and friends. The energy was just very positive, which is what we want,” Walker said. “I mean, this is the biggest turnout we’ve had all year. I think that the support helps the confidence of a team like this.”

The Brahmas trailed behind the Hornets by as much as four points. However, they managed to pull ahead, and Cole Chea got the kill that gave the team the first set.

Chea leads the team in kills with 191, the third highest in the Western State North Conference.

Walker said he was particularly impressed with the steady rhythm the team established early on in the game.

“The fact of the matter is that we controlled the tempo of the match,” Walker said.

The Brahmas led the second set from the start as Morgan Wadlow and Cole Chea made crucial kills and blocks that gave the team a 17-10 lead.

Brent Norkus made the kill that gave the Brahmas the second set, 25-12.

Chea said there was a tangible shift in his team’s mindset mid-game. During the second set, the Brahmas started playing more accurately and as if they had nothing else to lose.

“We realized that if we don’t finish this out we’re not going to go anywhere else,” Chea said. “We needed this game, and it’s home court advantage. Why not play our hearts out?”

Wadlow began the third set by scoring on four occasions contributing to the team’s early 5-1 lead.

Midway through the set, Blake Omartian served an ace that extend the Brahma’s lead to 16-11. Chea sealed the win with the kill that leads the Brahmas to the semifinals in Fullerton.

Walker said part of the team’s intensity was derived from the importance of this game.

“We knew what was on the line. If we win we’re going to the final four. If we win, we’re going to play Long Beach, and they are an undefeated team. We’ve played them twice already this season. It’s not easy to beat a team three times in a row,” Walker said.

Walker said the game against the Long Beach City College Vikings will be interesting given the team’s style of play.

“The mentors there are the same mentors I had growing up,” Walker said. “The style of volleyball will be the same, the execution will make the difference.”

Roese said the Brahmas appeared to be in rare form for their game against the Hornets.

“There’s always something we can improve, but I think today we had a perfect game. We played really well. Every part of our team did their jobs and we almost didn’t have any mistakes,” Roese said.

The game against the Vikings is on Thursday, April 26, at 5 p.m.