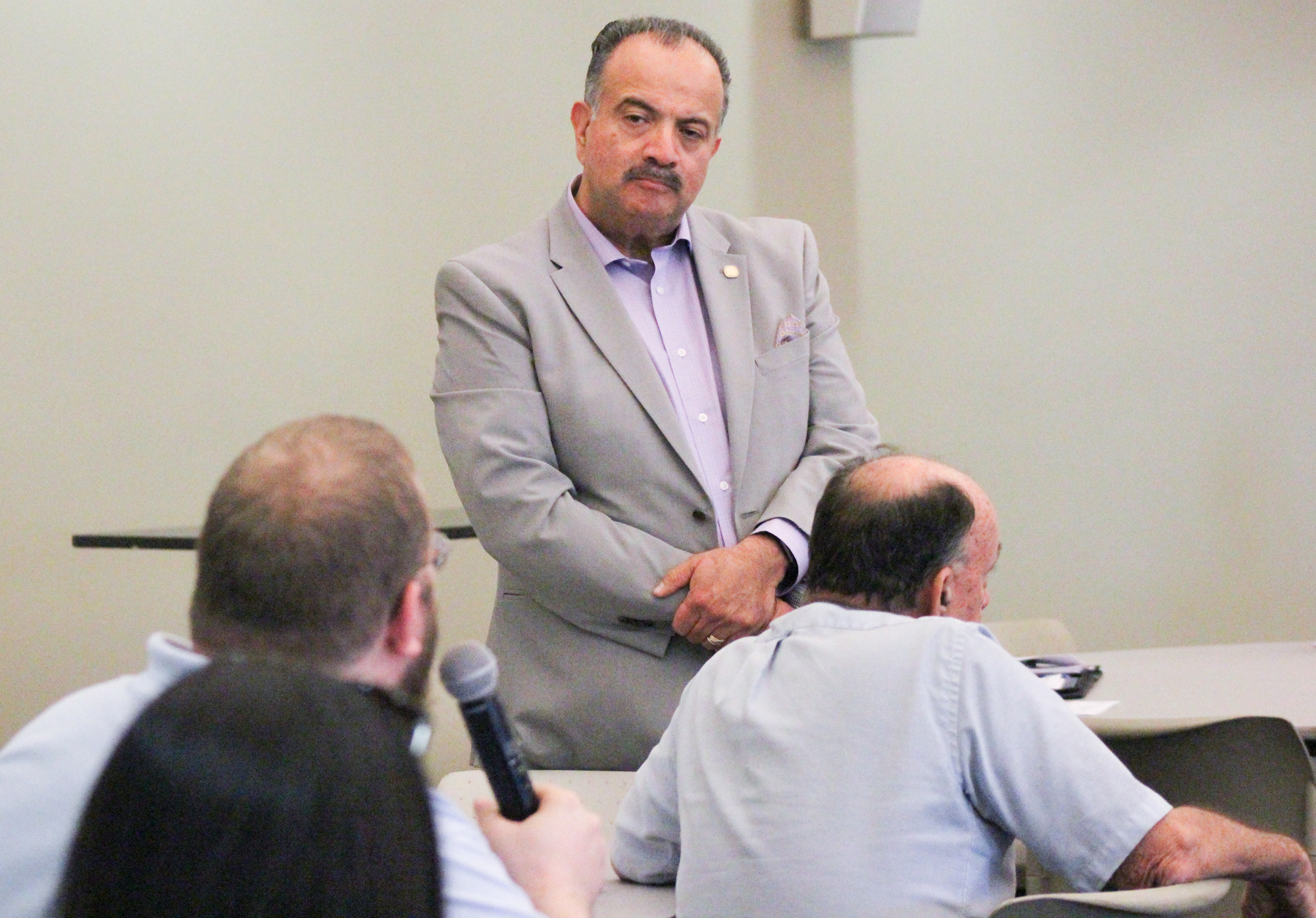 The search for a permanent president is underway, and, in a town hall style meeting, LACCD Chancellor Francisco Rodriguez met with members of the Pierce staff, faculty and administration.

The purpose of the forum was to openly discuss the process, makeup of the committee and what people want in a new president.

“I need your assistance,” said Rodriguez to the group. “We’ll keep working until we get the right president. We won’t settle for an average president.”

Rodriguez introduced Eva Conrad from Community College Search Services, the group that will take the lead in finding candidates for the position.

Conrad has experience that could prove vital in finding the right person, as she is the former President of Moorpark College. Conrad said it is difficult to pick and choose the key attributes that make up a successful president.

Conrad and Community College Search Services are not here to make a decision on the new president, or even make recommendations to the choosing committee. They will conduct the search for candidates, handling the background and reference checks during the process.

The committee that will make the final decision will be made up of members from the various branches on campus, and chaired by LA Mission College President Monte Perez.

The decision is not his to make, but Rodriguez has an idea of what he would like to see in a new president.

“First and foremost an educator that has their own strength in their own academic discipline,” Rodriguez said. “That allows the president to connect to and to support facilitate growth and an advocate for an academic institution after all this is a college.”

Vice President of Student Services Earic Dixon-Peters believes bringing together the different sides of the campus is key.

“What’s important is the person being able to articulate a vision and goal,” Dixon-Peters said. “A person who’s able to put a team together to carry out that vision and goal, and a connector within the multiple competing purposes.”

Those competing purposes that Dixon-Peters talks about, the different sides of the college, are the administration, faculty and staff. All employees of the school, but all with their own missions on campus.

The different purposes could be seen when they went around the room talking about what they would like from a new president.

Members of the faculty brought up desires for cooperation from the new president, as well as cementing cooperation and respect among the various branches on campus.

Administration, such as Vice President of Administrative Services Rolf Schleicher, stressed fiscal responsibility, as well as finding balance in the questions the candidates will be asked.

Lyn Clark, the chair of the computer applications and office technologies department, has been employed at Pierce for more than 50 years. With her years of experience, Clark believes the largest obstacle any president will face is the red-tape with the district and board that will have to be navigated.

There is another side that has an interest in the proceedings other than staff, faculty and administration. The students. Associated Student Organization President Isha Pasricha urged for a president that will work with students.

“I would appreciate if the new president would communicate with the student body more,” Pasricha said. “Hands on getting to know what students really want instead of hearing it from the meetings. There’s so many aspects amazing aspects to our campus and I feel like they go unnoticed because there’s a lack of communication.”

The next step in the process is to draft a position announcement based on the things talked about in the forum. Then an estimated eight weeks of recruitment before around five finalists will be chosen to interview with Rodriguez before being sent to the board.

“Today’s session was very useful. Understanding the sort of aspirations of this institution,” Rodriguez said. “Hearing and learning from the voices that were represented.”