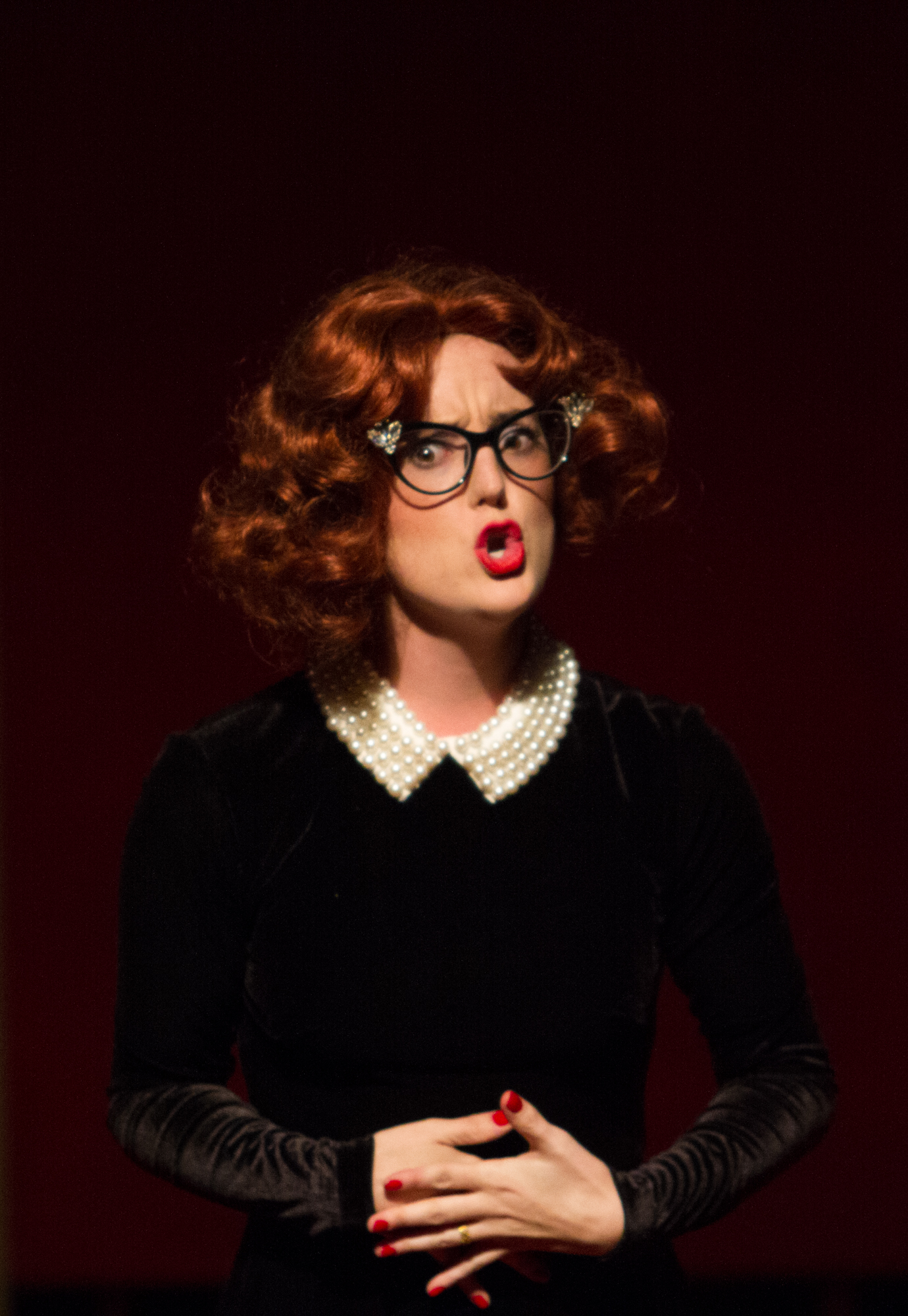 Observing extreme versions similar to ourselves can sometimes be hilarious. It also can foster an inner discussion about what we wish we were and what we hope we aren’t.

Pierce College’s latest theater production Durang Durang is a critique on the absurd nature of people and society. Directed by Anthony Cantrell, the exuberant comedy with six one-act plays runs through Dec. 9 at the Performing Arts Mainstage.

The opening sequence of the play is an aside by, the poster girl of the play, Mrs. Sorken (Laurien Allmon). Allmon’s character is witty, charming and hilariously clumsy. Mrs. Sorken gives the audience a history lesson on the role of theater in society and makes fun of the seriousness of dramatic theater productions.

Mrs. Sorken, who is found to be the aunt of the plays original writer, Christopher Durang, is used as a connecting character to the other acts, popping up as a customer in a restaurant and even a F.B.I agent. Her opening to the show was appropriately strange, comedically sound and set the foundation for what’s to come from the remaining five acts.

The second play, titled For Whom the Southern Belle Tolls, introduces a crude and easily annoyed character Amanda (Sarah Ruth Ryan), who is the mother to, Lawrence (Trevor Alkazian) an anxious teen who self-diagnosed himself with different diseases and disabilities. Ryan plays an intense and often times relatable southern house mother who’s concerned her son is too much of a wimp and will never find a wife. Things change when Lawrence’s brother, Tom (Jon Michael Villagomez), comes to dinner and brings coworker, Ginny (Megan Milo).

Whether it was the fake limp or the collection of glass cocktail stirs, Lawrence’s dorky physicality was one of many comedic elements that worked well in this scene.

However, the high point lies in the climax of the act when Tom plans to depart from his family and never return. The lights fade and inspirational music played quietly under Tom’s monologue. As an audience member, you begin thinking the act is ending, and then the lights quickly came back up and the sound came to a screeching halt and it is found that Tom was on the porch speaking this deeply personal monologue still in view of the family.

The collaboration of the lighting and sound was exceptional throughout the play, this scene being its best example. And the seriousness of Tom made the climax amusing and worthwhile.

Nearly everything about this production seemed nonsensical in the best way possible, even down to the set design by Frederica Nascimento. The set seems like a collection of furniture fragments from all over the world. Though underused, the backdrop was interesting and played into the absurdity of the play nicely.

Nina in the Morning is another departure from the previous topic discussed, it tells the story of an incredibly wealthy, older women, Nina (Joni Leigh), and her adventures attempting to seduce her servants and angsty teenage son, James (Tomas Ciracio).

This act, unlike the others, has a narrator (Joe Green) who not only presents the story in a monotone 3rd person form but also plays on the common trope of having the narrator play miniscule roles and remain in character throughout the scene. Narration by Green was subtle enough to give the actors enough room to hit their punchlines excellently and the overall straight faced nature of Green throughout the madness that ensues made the entire scene more pleasurable.

The exceptional sound design by Edward Salas became apparent in the preparation for the fourth play, The Book of Leviticus. As the actors transition into the next act the sound began to rifle through radio feeds until it introduced the next scene as a daytime television show. What could’ve been just set up music for the following scene became a well done narrative choice.

The Book of Leviticus, takes more of a religious turn. As a southern wife, Lettie Lu (Michelle Johnson) is persuaded by the teachings of the biblical text The Book of Leviticus to host a daytime talk show filmed by supportive husband, Tommy (Trevor Alkazian).

It’s unclear whether it was a directorial decision by Cantrell or a character choice by Johnson but the role of Lettie Lu didn’t seem cynical and villainous enough to carry out the crimes she later commits in the scene. Although it was evident Cantrell attempted to surprise the audience, the climax didn’t seem believable and the scenes intended shock fell flat.

Another unsavory portion of the play came in the fifth play, Wanda’s Visit, which tells the story of an arguably happy, normal husband and wife, Jim (Spencer Sharp) and Marsha (Michelle Johnson), who are burdened by Jim’s high school sweetheart Wanda (Meagan Truxel), who is desperate to win Jim’s love.

The chemistry between Sharp and Johnson wasn’t as strong as it should’ve been and acting by Truxel for the character of Wanda was overly aggressive and unrealistic.

The high point of the act came toward its end in the restaurant scene when the Waiter (Arash Ghanavatian) makes a grand aside about his future. Although random, the monologue gave Ghanavatian room to flex his comedic abilities which shined through even in a smaller role.

Business Lunch at the Russian Tea Room proved to be the highlight of the entire production. The story follows a screenwriter, Chris (Jon Michael Villagomez) who is looking for his next big project and is introduced to a vivacious Hollywood agent Melissa Stern (Megan Milo) who tasks Chris to write on topics that will shock mainstream audiences.

The entirety of the act is riddled with rib-tickling punchlines from main characters Chris and Melissa Stern and even from lesser characters like the Waiter (Arash Ghanavatian) who once again shines as a rude and overly discourteous server.

The pinnacle of comedic talents in the act and arguably the entire production came in the climax when Chris, alongside the authoritative Melissa Stern, contemplate what there future movie will be about. Actors were on stage during the brainstorming part, having the actors take form to Chris and Melissa Stern’s ideas as they were saying them. This use of storytelling made every new development in the story being written on the spot an exciting and shocking revelation.

Remarkable comedic abilities can be found from the two actors in Chris and Melissa Stern’s fictitious screenplay, Bryan Rojas and Angel Villalobos, who have an unlikely romance as a Priest and Rabbi. Shock factor, which was a key comedic element throughout the play, made its best appearance in this act. The willingness and the commitment from Rojas and Villalobos created something special.

Durang Durang longs to leave audiences with a sense of self reflection, having the characters in the stories convey exaggerated versions of ourselves. In a play with an assortment of interesting characters, Cantrell succeeds at making each of them relatable.

The overall comedic intelligence from the cast, terrific lighting and sound design, paired with classic comedic tropes tastefully used throughout Durang Durang will remind audiences why comedy can be successfully achieved on stage.

You can still catch Durang Durang Friday and Saturday, Dec. 7 and 8, at 8:00 p.m. and a matinee show Sunday, Dec. 9 at 2:00 p.m. on the Performing Arts Building Mainstage. Tickets are available at www.brownpapertickets.com.