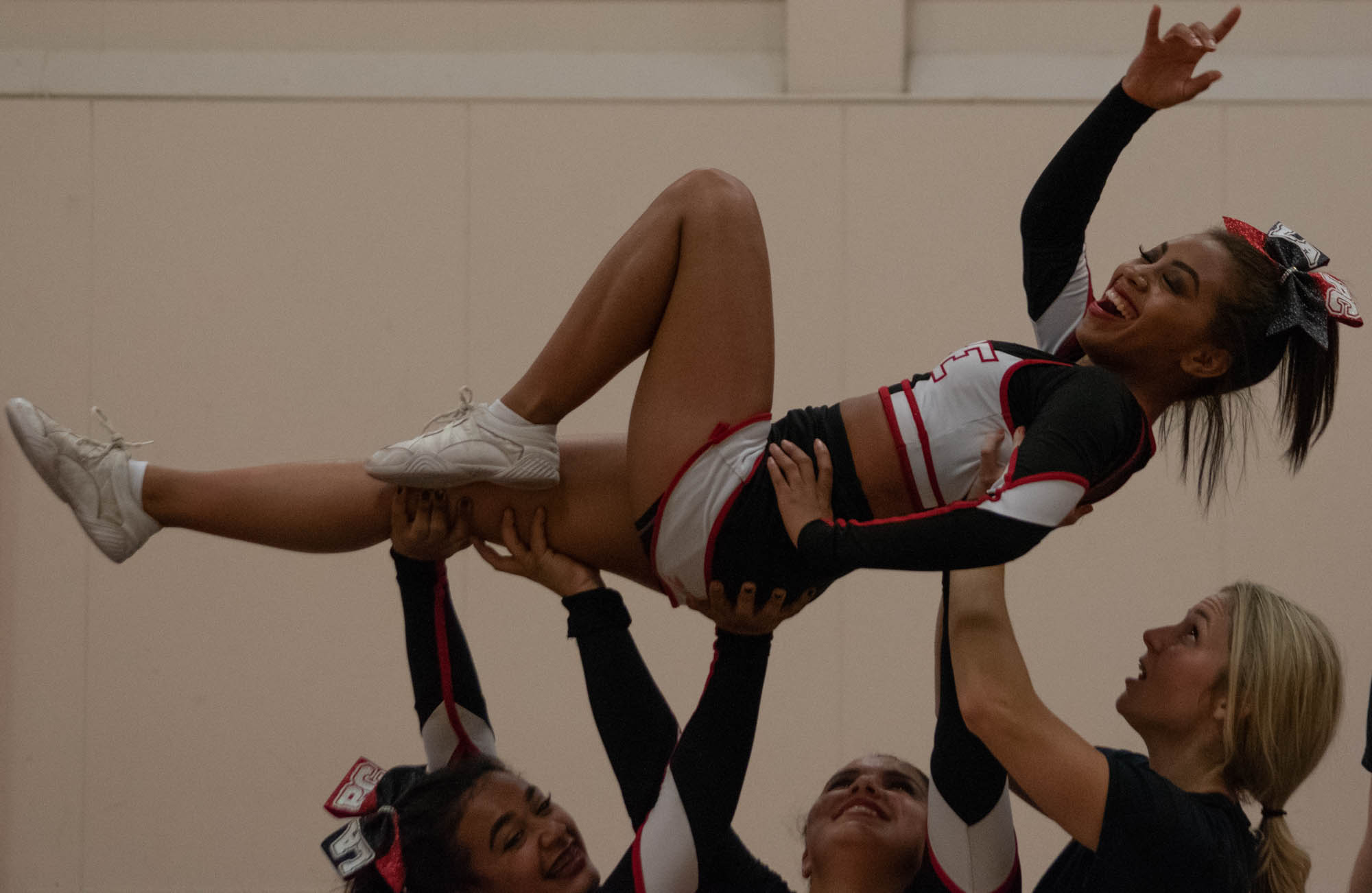 Despite the Pierce Cheer and Competition team losing many players throughout the season, they were still able to make a new addition – a national championship banner.

The judges scored the Brahmas routine with zero deductions and were awarded first place at the Spirit Cheer SoCal Finale Nationals in San Diego.

Zach Harris, cheer director, applauded the teams’ diligent mentality through an obstacle-filled season and believes that this is the best team Pierce has had in yet.

The season was not a smooth ascension to the top as they lost a majority of the team during the season due to financial reasons and scheduling conflicts. According to Harris, many of the members that left had key roles on the team and they had to constantly alter the routine every week because of their departure.

“We’ve had to change our routine a lot,” Harris said. “Almost every practice we had to build a new routine, switch something up or add a new member and changing around a formation. When you do that a lot, it’s really hard to clean up and organize it.”

As the weeks went on and the competition date came closer, Harris said the team put in extra work in the last few practices they had and even switched around crucial roles for the routine.

“Towards the end, we had an extra couple extra practices,” Harris said. “They worked really, really hard to make sure that the stunts that we were working on were solid and we had to change a few flyers which is a major thing, but we ended up being able to switch our pyramid around and make it work.”

While performing the routine on the national stage, Harris admitted that he was nervous but had the utmost confidence in the girls because of the hours of training they committed themselves to doing.

“During most of their stunts I was a little worried, but not too worried,” Harris said. “I knew they were strong and I can tell they were going to hit it.”

Unlike Coach Harris, Ehlanya Skinner, base and back spot, said she was not nervous because her twelve years of cheer experience prepared her for this moment.

“Honestly, because I performed so many times, I rarely get nervous,” Skinner said. “Once the routine happens, you go into autopilot. You don’t really think of anything; your body already knows what it’s going to do.”

Skinner said she would rank winning nationals the number one accomplishment in her cheerleading career because she has been competing for over a decade and never won any until now.

Shannon Hawkins, back spot, said it’s a very satisfying feeling to work hard for hours every week and to see the rewarding results.

“No one sees the hardships that you went through,” Hawkins said. “No one sees the falling and the struggling, but what they do see is our accomplishment and how we feel and how our energy just vibes throughout the floor.”

Skinner compared Coach Harris to a ‘cheer dad’ because he comes off as a father figure to the team.

“If we’re ever having a hard time, he’s the one that we want to go to,” Skinner said. “Whether it’s in cheerleading or in life. He’s not just a coach, but he’s also teaching us life lessons outside of the gym.”

Harris said that Hawkins and flyer, Sheyla Monterroso are both graduating from Pierce after this semester and transferring to Cal State, Northridge to try out for the cheer team.

Hawkins said that she always puts her education as her first priority before cheer and her work.

“Competitions and events, they’re all outside of my school and the times that school does interfere with these events, school comes first,” said Hawkins.

Interim Pierce College President, Larry Buckley, acknowledged that the goal for all student athletes to further their education and compete at a four-year university.

“Athletics is a doorway for so many young people who wouldn’t otherwise be coming to college if not for those athletic programs,” Buckley said. “What they discovered is that they came to cheer or play tennis or be on the basketball team and the baseball team and what they’ve really entered into is the largest, most successful, academic learning community we have on campus.”

According to Buckley, cheer has more incidents and injuries than many of the popular sports combined.

“They are very courageous, very skilled, incredible athletes who are the athletes on the sidelines,” Buckley said. “I am very proud of them. Great job. Now, we have to get them all to be successful in the classroom and get their degrees, transfer and go on to cheer at a university.”