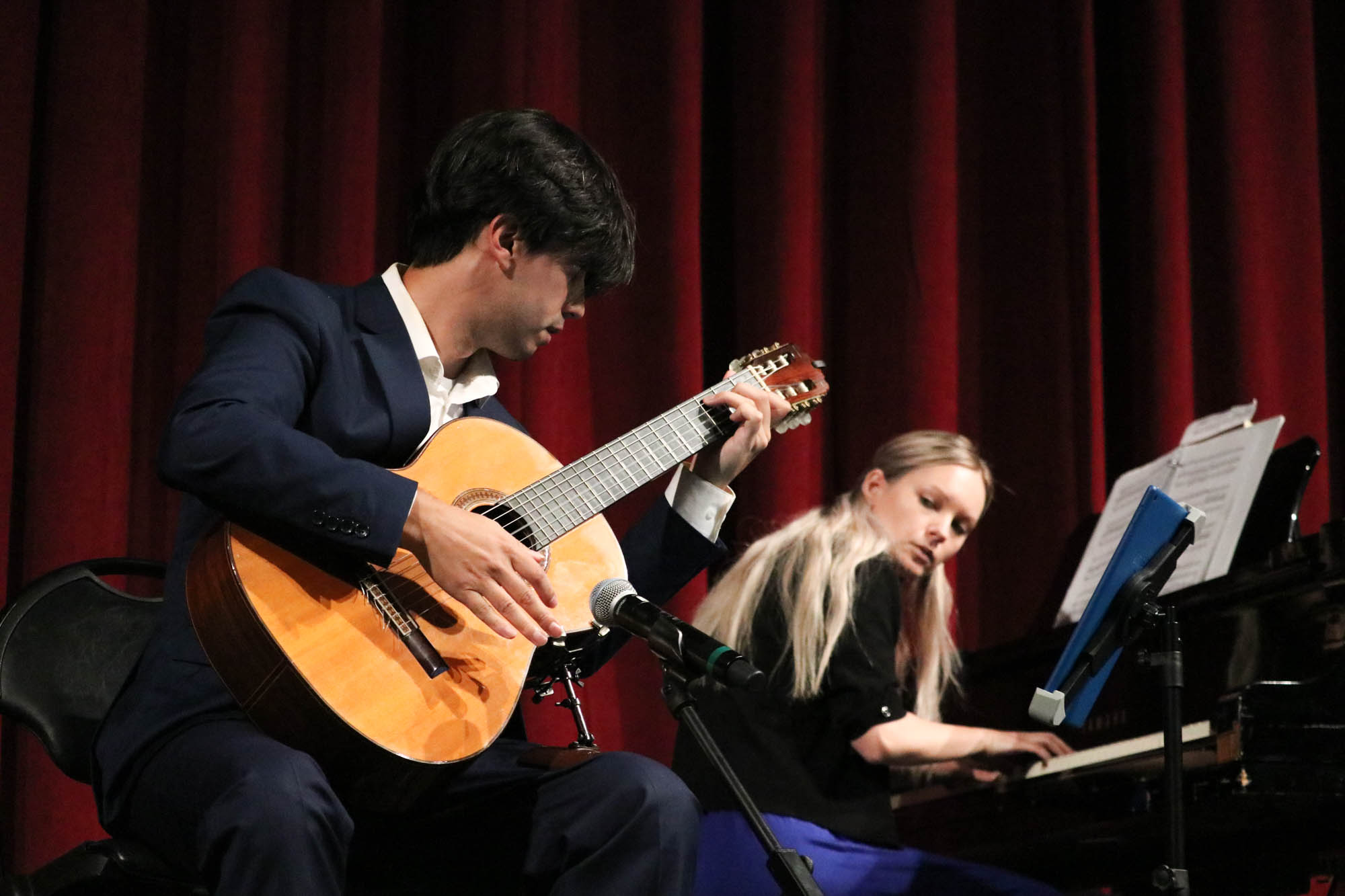 As he sat and strummed his guitar, the musician filled the room with emotions through the compositions he played that were based on folk music and originated in South America.

Guitarist Hugo Nogueria has been playing since he was 11 years old and he is currently teaching classical guitar at Pierce College. On Thursday, Oct. 3 he performed solo guitar and was then accompanied by his wife on the piano in the Performing Arts Building Mainstage.

Nogueira first walked on stage by himself to play four pieces that he explained are all from the 19th century.

He has been performing in many states across the U.S. for the past few years and he is passionate about teaching what he loves.

“I’m very happy to be here and share this music with you all,” Nogueira said.

Nogueira won the 2011 American Guitar Society competition in Los Angeles, Calif. He attended three conservatories in Brazil and then received a Bachelor’s degree in 2007 and a teaching credential in 2010.

The first two songs he performed were composed by classical guitarists from Argentina. The first song, “Milonga” by Jorge Cardoso and the second, “Verano Porteno” by Astor Piazzolla.

Nogueria sat on a stool while he read the music off a tablet.

He was incredibly focused on his technique as he played the first two songs softly.

The next song, “Choro N1” was composed by a man from Brazil named Heitor Villa-Lobos. Nogueira picked up the pace with this next song as it had more emotional ups and downs while the beat was also faster.

The last song that was performed on solo guitar was, “Vals Venezolano N3” by Antonio Lauro who was from Venezuela. This piece was also more upbeat as Nogueira plucked the strings of the guitar at a much quicker pace than the first two songs.

Nogueira’s wife Ekaterina Bessmeltseva then joined him on stage to play piano while he continues to play guitar.

Bessmeltseva is a concert pianist and has been playing the piano since she was six years old. She has mainly performed in North America, Europe and Russia. She is a soloist as well, but when she and her husband play together, they enjoy being chamber players.

Nogueira explained how they are able to keep up with each other and be on the same page while playing together.

“There is a certain kind of balance that goes on between us that makes it possible to play together, it includes lots of communication,” Nogueira said.

The next four pieces that they played together are all songs that came out of the 17th century.

The first song, “Grande Sonate Brillante, Op.102” was by an Austrian composer named Anton Diabelli. Nogueira said that this was a comfortable piece to start with, and his wife agreed that they both enjoy this piece.

The next three songs they performed are all composed by Itailan musicians. The second song, “Rondo N2 Op.68” by Mauro Giuliani had different pieces of the song were it solely focused on the guitar or piano at once.

The last two songs , “Duo Op.11” and “Grand Duo op. 86” were composed by Ferdinando Carulli. These two songs were composed to be played by the piano and guitar. Both instruments accompanied each other throughout the majority of both pieces.

After the final song, the couple then took time to answer any questions that the audience had. They explained the kind of time it takes to prepare for performances and said that it takes roughly two weeks to put together something like this.

Nogueira also talked about what it’s like practicing these pieces from so long ago and how he plays them for the first time.

“I try to imagine how the composers played these pieces back in the day,” Nogueira said.

These concerts are free and take place almost every Thursday from 1-3 p.m. at the Performing Arts Building Mainstage. The next concert will be on Oct. 10 and it will be a student recital.