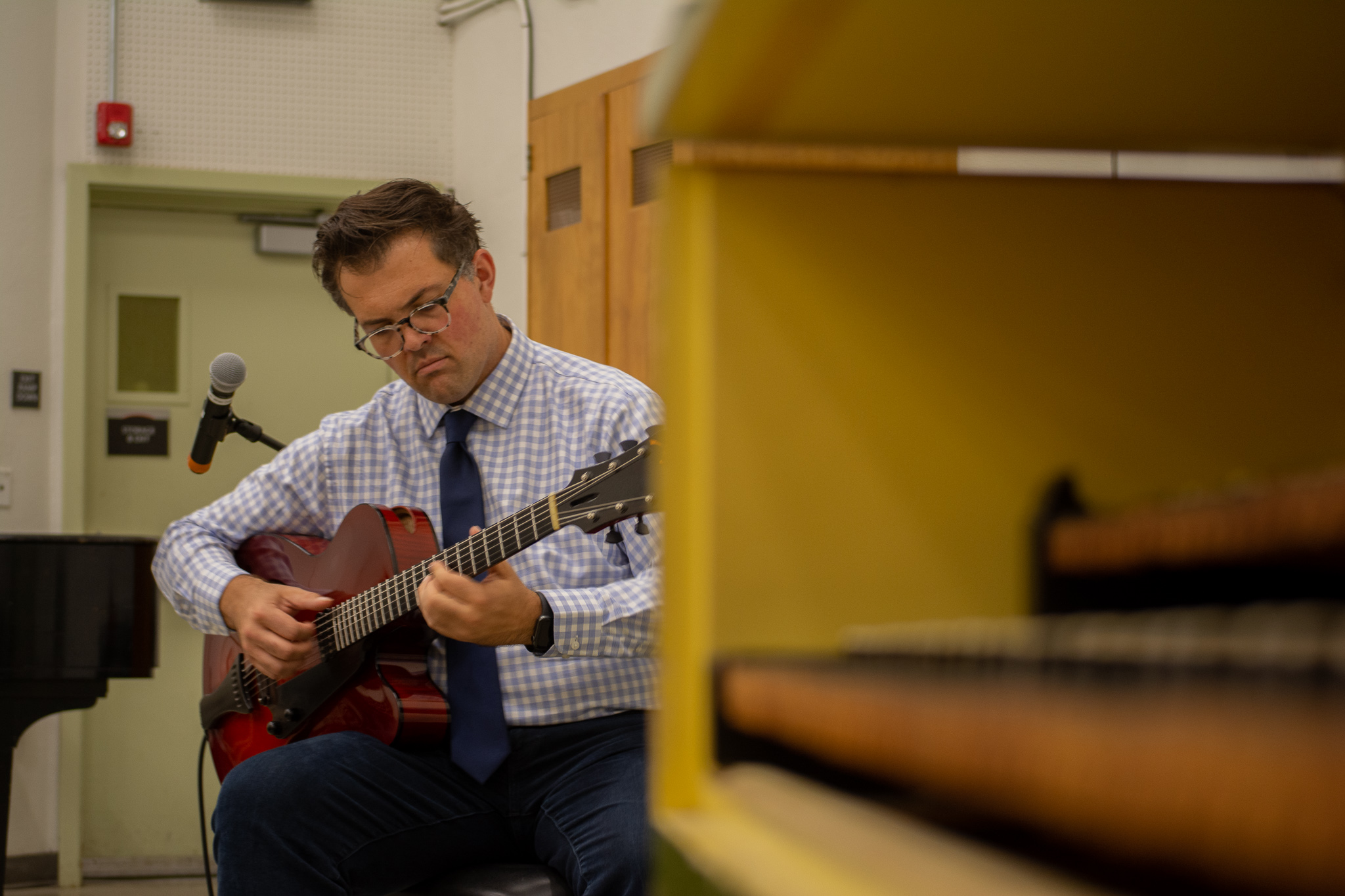 Surrounded by old pianos and whiteboards, a solo guitarist slid his fingers up and down the fret of his archtop guitar as he improvised soft jazz and bouncy blues in a crowded classroom.

John Storie, a jazz guitarist and an adjunct faculty in the Applied Music Program (AMP) at Pierce College, played a jazz line-up in the latest Thursday Concert.

Storie took a moment to tune his guitar, then he bent over the instrument, closed his eyes and began to play. He started with the standard “Stompin’ at the Savory” by Benny Goodman, Chick Webb and Edgar Sampson. He improvised from beginning to end, but kept the chords and rhythm true to the standard.

As the song picked up, he tapped his toes gently against the concrete, classroom floor, not making much of a sound, but helping maintain the rhythm in his body. Halfway through the standard, his single-lines turned into chords as he slapped the strings and the body of the guitar, and let out the occasional sign and scat, adding more sounds to his solo.

“The way that I shape the tunes that I play often comes from my own interpretation of the song, and also imagining that I’m a whole big band. My goal as an artist today, in this solo concert, is to make it feel like there’s more than one guy up here,” Storie said.

After finishing the first song, Storie started talking to the audience and opened it up to questions. He kept this pattern of playing a song then talking to the students throughout the concert. After a few minutes, he moved on to the ballad “Ask Me Now” by Thelonious Monk.

This time, it wasn’t just his toes tapping. Storie’s body swayed as he shook his shoulders and struggled to stay still. He would occasionally look up from his guitar, showing a small smile as  closed his eyes once again.

As he finished the song, he talked about jazz structure and improvisation. When referring to standards, he demonstrated the melodies with scat singing through a smile. His eagerness and humor intrigued the audience and inspired questions and comments about his performance and jazz.

He then moved on to “Stella by Starlight” by Victor Young, one of the most famous jazz standards.

The sound of tapping came from the audience and not just the stage. Heads bobbed and shoulders swayed as Storie played soulfully.

With each standard, Storie’s performance grew in intensity and passion. This time, his feet came completely off the floor and he looked up toward the ceiling with his eyes closed and a smile on his face.

For his last piece, Storie performed “Blues” by Irving Berlin. Rather than starting right away, Storie paused and clutched the instrument and the room grew silent. After a few seconds, he took a breath, looked up and began to play.

In this song, Storie switched from regular strumming and plucking, to tapping only with his left hand. As he played with one hand, he maintained the energy and tempo as he had before with both hands. During the quiet parts, he shrunk as he hunched over the guitar and listened closely to his instrument, but then slowly sat up and played louder and more powerfully.

Storie let “Blues” fade out and ended the concert.

“We’re very lucky to have him as an AMP instructor… he’s very approachable as a professor, he knows how to relate to the students,” Mazon said. “He feels like somebody you could sit and have a chat with, and we want those kind of professors here at Pierce where students are comfortable asking questions and learning from them.”

Daniel Durand, one of Storie’s students, watched the performance.

“It was really cool because I’m so used to seeing him in the lesson setting, which is totally different. But to see how comfortable he is on the stage, just playing and talking to people, is impressive and inspiring,” Durand said.

The next Thursday Concert will feature Micah Wright playing the clarinet and saxophone on Oct. 24, from 1 p.m.-2 p.m. in the MUS 3400 Building.