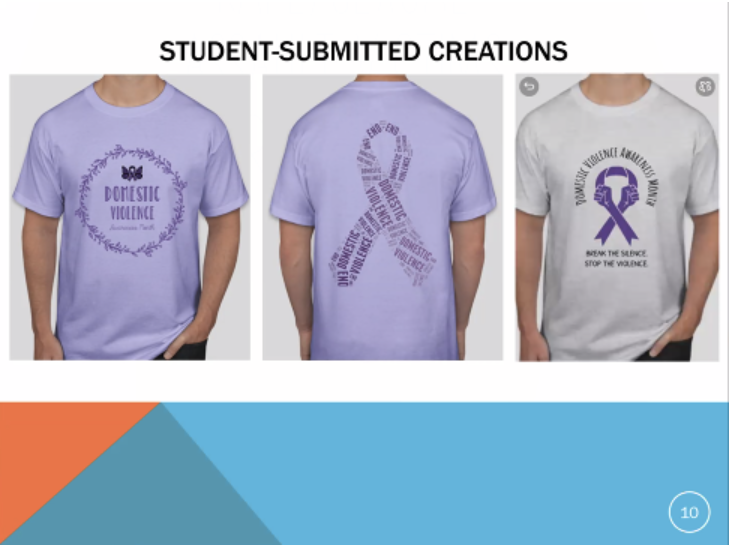 Even students who didn’t know about the Clothesline Project likely saw last October dozens of t-shirts hanging between trees in Rocky Young Park with messages sharing the experiences of sexual and domestic abuse survivors.

The park is empty now, but on Oct. 14 the Clothesline Project continued on Zoom, and t-shirts moved from hanging on lines to being online.

This semesterly event brings together survivors and allies and allows the opportunity to spread a positive message or tell stories by decorating t-shirts.

Due to COVID-19 protocols, the t-shirts were made and shared digitally this year.

According to the project’s materials, its aim is to “provide evidence that incest, domestic violence and sexual violence exists in our communities.”

The Clothesline Project originated in “1990 when a member of the Cape Cod’s Women’s Defense Agenda learned that during the same time 58,000 soldiers were killed in the Vietnam War, 51,000 U.S. women were killed by the men who claimed to love them,” according to its material.

Pierce’s textbook buyer Holly Hagan brought this project to campus as a survivor of both domestic violence and sexual assault. Hagan introduced Pierce to the Clothesline Project because she thought it was a good way for students, staff and faculty to bring awareness toward sexual and domestic violence.

“One of the most memorable shirts that sticks in my mind always was a young lady who had been molested basically since she was four years old and had never told anybody,” Hagan said. “It was a family member who had been molesting her and she saw the clothesline project, asked to make a shirt and it was the very first time she had ever expressed what had happened to her.”

This encounter made Hagan realize how often survivors are not able to vocalize the trauma they carry because of fear, judgement and having to deal with the trauma themselves.

“There needs to be extra attention for young people and check-ins with kids and with parents too,” Joseph Simon, an attendee of the event, said. “I really, really think that this has to do a lot with their childhoods as well because everyone used to be a kid.”

While it is a means of expression for the contributors, the display acts as a reminder for passersby that sexual and domestic violence needs the attention necessary for the numbers to go down.

“To see how many people just stop to read each shirt, they really take their time to read each shirt hanging,” Hagan said. “And what’s really impressive to me are the men who stand there to read these shirts to open their eyes and see what predominantly women go through.”

Having been sexually abused in the workplace and at home by his stepmother, survivor Jon Reynolds shared his story as a male survivor.

“I want to say to the ladies out there, I feel where you’re coming from,” Reynolds said. “I just want to get the word out there that sexual abuse does not only happen to women. It happens to everybody. It happened to me.”

Reynolds expressed that male survivors are often times overlooked during the conversation of sexual abuse and has carried guilt and shame with him throughout his life. Not to mention, abusers are often not held accountable and given the opportunity to continue abuse.

Currently, the Student Health Center at Pierce College is offering individual therapy and group therapy online. There are two full stress and anxiety groups and are looking to expand.

“If we have at least four students who are interested in any one topic; veteran groups, parent groups, etc. We can start up a group for them,” Director of Health Center Beth Benne said. “We have highly confidential individual zoom sessions and it doesn’t cost you a thing [$19 fee].”

Supervising psychologist of the Health Center Dr. Niaz Khani expressed that UCLA is currently running a group for sexual harassment survivors that is free and open to non-UCLA students.