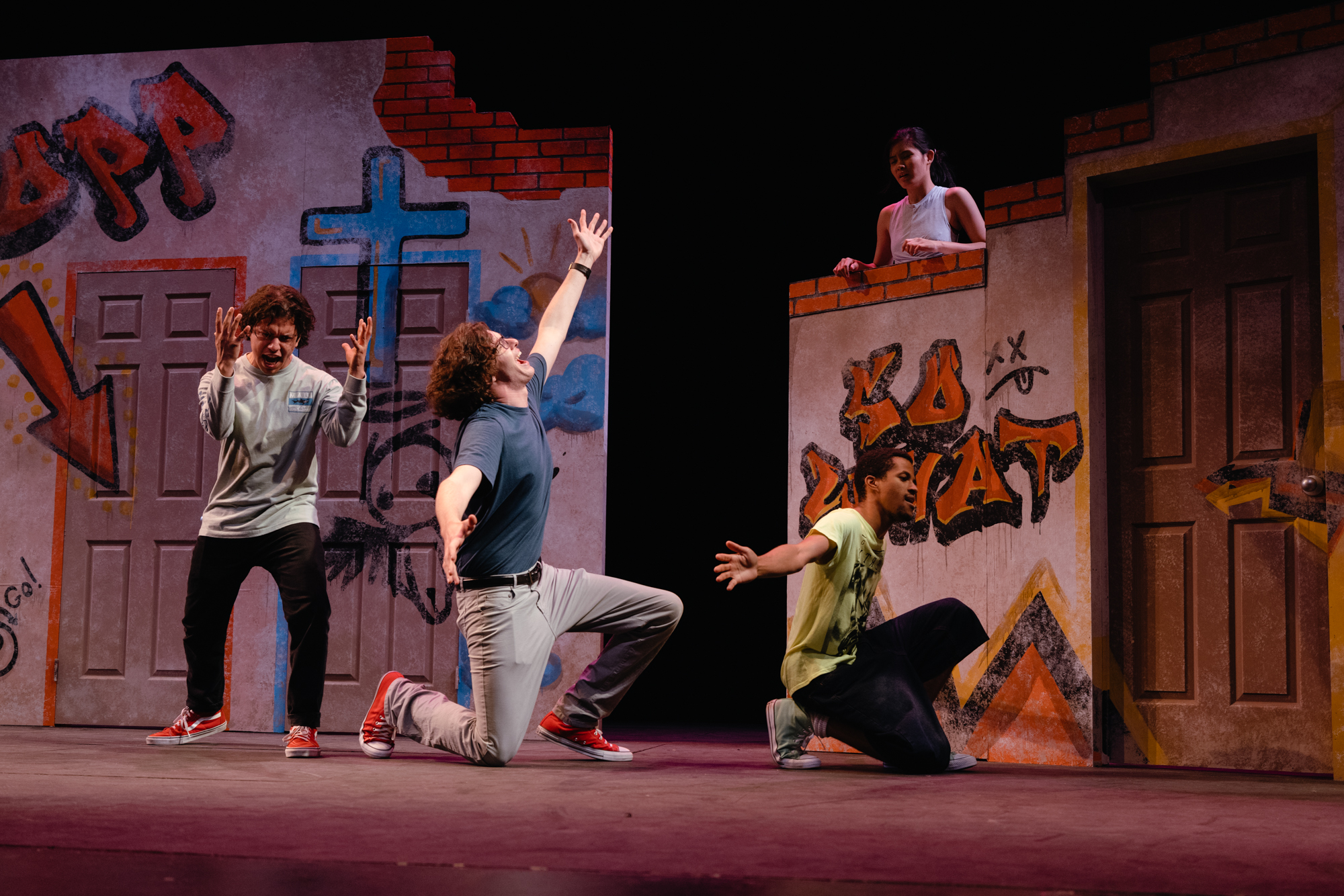 After standing empty for an entire year, the Pierce College Performing Arts Building was filled with prop graffiti walls, hanging lights and the laughter and smiles of the theater department.

The department held their first indoor rehearsal on campus last week for “The Bomb-itty of Errors.” Pierce professor and Director of the play, Shaheen Vaaz, said that everyone was very thrilled to be back.

“We’re exhilarated,” Vaaz said. “We’re happy and feeling really good about being with other people again in this beautiful space. We’re thankful to Pierce for letting us be back, and we finally get to do theater the way theater was meant to be done.”

The musical, described as an ad-rap-tation from William Shakespeare’s ‘The Comedy of Errors,’ features a set of rap songs and loads of humor.

Vaaz said that acting over Zoom was a difficult challenge for the theater students, but they still stayed strong.

“They’re resilient, they’re loving, they’re compassionate,” Vaaz said. “They’re having so much fun, you know. I love them.”

Student Itzhak Matos said that being back in person felt jarring at first.

“It’s a little surreal being back with so many people in the room, but almost pretty much everyone has been vaccinated at this point,” Matos said. “I feel very grateful being able to be in one of the first shows that’s back in person in the area. It’s a lot of pressure but I think it’s going to be a lot of fun.”

Vaaz said that the department is planning to have a live, but small audience consisting of friends and family while keeping COVID-19 precautions. She said that the show would also be broadcasted over Zoom for those who are unable to attend in-person.

Student Manon Guijarro said that everyone in the department has also been keeping safety in mind among their eagerness.

“We’ve been taking our precautions seriously,” Guijarro said. “We’ve been really tight knit and keeping each other safe. We care a lot about each other, especially the audience.

While the department was rehearsing over Zoom for the past year, some students like Norman Thatch said that they were hit hard by the pandemic.

“We were hit terribly and awfully hard,” Thatch said. “The thing about what I’ve realized is we’re not even making income right now.”

Guijarro added that the department lost a lot of everything since COVID-19 started, but everyone has tried to stay hopeful.

“We’ve lost a lot of time together,” Guijarro said. “Since theater classes are so in-person, it’s really taken a lot from the theater department, but we’re striving.”

Other students, like Topher Ngo, said that he was looking forward to performing for a live audience after being stuck in the pandemic the past year.

“Coming out of the pandemic and quarantine has been a very heavy time for a lot of people, but the show is full of light, joy and comedy, and we’re excited to share it with people,”Ngo said.