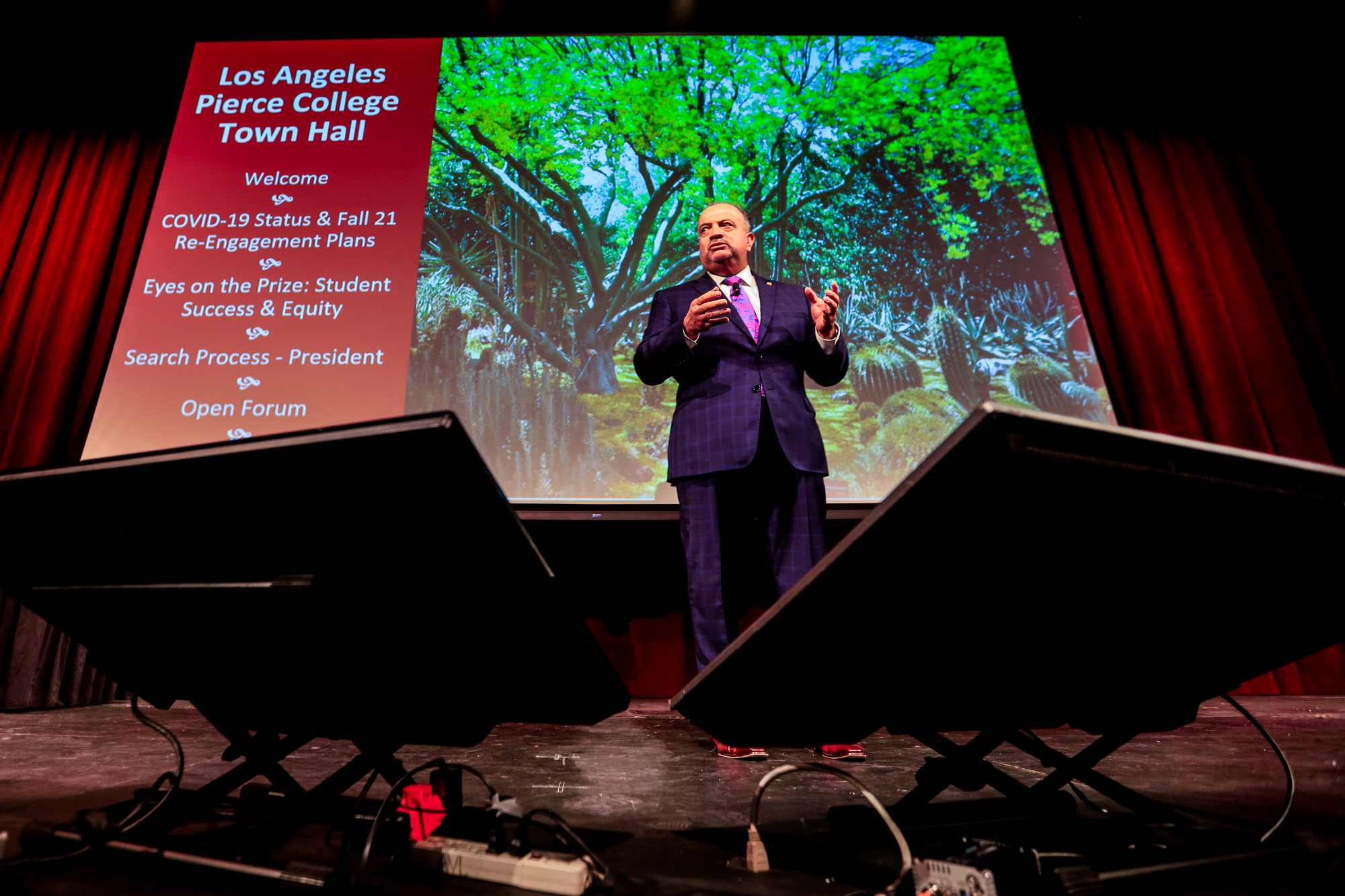 While the question of who will be the next Pierce College president is still up in the air, a general timeline of the selection process was addressed Tuesday morning by Chancellor Francisco Rodriguez.

The meeting, led by Rodriguez, centered around Pierce’s re-engagement plans for the upcoming fall semester, focused on the selection process for a new president and emphasized the importance of vaccinations and campus safety.

With this town hall being the first in-person since the campus closure March 2020, Rodriguez said that he wanted to answer any questions the community had, face-to-face, regarding future plans for the school.

“I had this urgent sense of wanting to step [back] on this campus,” Rodriguez said. “Given the crossroads and the juncture of where we’re at with discussions around equity, discussions around where we’re at with the budget and moving forward with leadership, I said one of the ways that I could demonstrate care, concern and an authentic interest is to show up and thank you for being here.”

Rodriguez said that the campus was planning to have all students and staff complete symptom check-ins through the SAFE app to track and trace any new outbreaks, per state law. He also emphasized that it was important for any staff member interested in receiving the COVID-19 vaccine to get vaccinated.

“The goal here is the obvious one,” Rodriguez said. “The goal is immunity, just to be very clear. As we think about a greater in-person presence this fall, science is what’s going to guide us towards that direction.”

rations Center to ensure that safety remains as the top priority.

With regards to searching for a new president, Professor and faculty guild member Curt Duffy said that filling the position would be challenging.

“A college president is an extremely difficult role here, and that person has to not only consider all of the different demands and needs of the actual campus, but then has to interface with the district which may have needs, desires and plans of itself,” Duffy said.

Duffy also asked Rodriguez what was necessary of any prospective candidates to be able to succeed and thrive in that role. Rodriguez said that a successful college president would need to be well-versed in technology and have good communication skills.

During the meeting, the Chancellor also presented an outline of the anticipated timeline for the new president. The process would include selecting a search firm to conduct background checks and forming a screening and interview committee, and would take place during the remainder of this year going into 2022.

“[The candidate’s] value statement, the notion of being authentic, caring, compassionate, empathetic, value driven and equity minded are all essential, non-negotiable characteristics in this kind of work,” Rodriguez said.

Rodriguez also said that the new president would have to align with the values of Pierce, and understand the school’s needs.

According to Rodriguez, the interim president would be announced sometime next week.

President Alexis Montevirgen said that he is hopeful with not only where the school is headed, but also for the future in general.

“These last 14 months were definitely unprecedented times, and it’s great to see that we as a campus, as a city, as a country and as a nation are now turning the corner on COVID-19,” Montevirgen said.