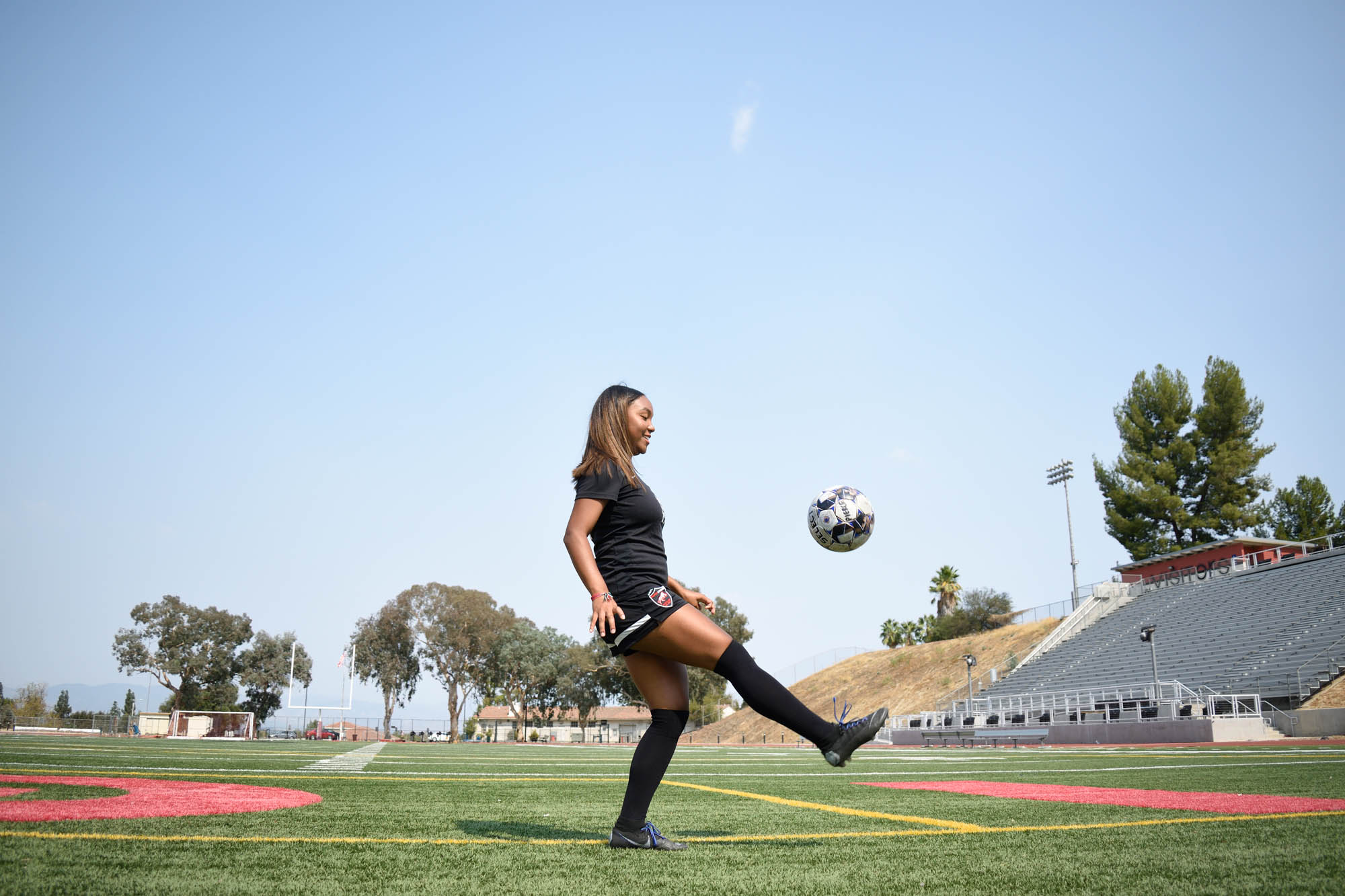 Pierce College’s women’s soccer team is off to a hot start, and much of that has to do with forward Kiara Washington.

For Washington, getting ready for action is simple.

“I try clearing everything else out of my mind and think about soccer,” Washington said. “Sometimes I’ll watch some soccer videos. I don’t really have a certain routine, just staying focused, listening to music, and getting hyped.”

Washington has been playing soccer since she was 12 years old and was introduced to the sport by her family’s extensive history with the sport.

“My aunt played midfield or forward,” Washington said. “My mom played everywhere. She was a trooper. My mom has always been a big supporter of mine,” Washington said. “I’m definitely grateful for that, especially with her having a soccer background, knowing about the game, and my family knowing about the game too. I liked it, I liked competing and being competitive.”

Washington made her debut against East LA College and scored four goals in the game.

Her impact was instant because she leads the team in goals scored.

But to Washington, her role is much more than scoring goals. Her main focus is making sure the team is on the same page.

“I don’t have a specific role,” Washington said. “Us playing as a team together and helping each other out, I feel like is important to us.”

For many athletes having a ritual before a game or practice is important.

Although this is their first year together, head coach Adolfo Perez and Washington have been able to help lead this team to a 5-1-2 record.

Perez said his team has been graced with the presence of a player like Washington.

“We were blessed to get her,” Perez said. “She was the most sought out player, she was the city player of the year.”

Perez said that what he’s most fond of with Washington is her modestness and her athletic talents.

Every team has its leader and it’s important for players to have someone who can lead by example.

Perez said that Washington’s work ethic is infectious for the rest of this team.

“They see when she works hard, it’s a great impact,” Perez said. “They look at her and think, ‘if she’s working hard, I should be working hard.’”

While the soccer stud’s success this season has been noticed by many on campus, it’s also been recognized by her mother, Rosie Washington.

Rosie Washington said it’s been great to see her daughter be so successful this season.

“It’s amazing, the smile on her face is everything,” Rosie Washington said. “She’s always working on her craft and can be a bit tough on herself. However, she understands that her success doesn’t depend on herself, but the support of her teammates, coaches and family.”

In a year where athletes everywhere were forced to stop competing, many had to dig deep in order to stay prepared and ready for when things were able to go back to normal.

Rosie Washington said that despite the lockdown, Kiara never gave up and continued to train hard.

“It’s been a rough year with COVID shutdowns,” Rosie Washington said. “But Kiara didn’t stop working from training early mornings or late nights at home to running around our neighborhood. She is a go-getter, she doesn’t give up. Even when things get rough, she doesn’t stop.”

When asked about kneeling during the national anthem, Kiara said that she stands behind her actions.

“I feel like some people look at you differently and they’re just like, why isn’t she standing up putting a hand over her heart,” Kiara Washington said. “If I’m happy with what I’m doing, then that’s all that matters. At the end of the day, I know who I am. Being African American, dealing with so much stuff, and also being Hispanic. I think that by taking a knee, it’s powerful.”

The season is still young but Kiara Washington said that her expectations for this team is to keep their camaraderie on point.

“Continue to work hard,” Kiara Washington said. “Stay focused, play as a team, work hard together and just take it day by day. Put the previous game behind us and look into the game we have that week and stay focused and stay ready for that game.”

“The future is bright for Kiara and all her teammates,” Rosie Washington said. “She looks forward to continuing her education, studying medicine, and continuing playing competitive soccer. We look forward to watching her flourish in every aspect of her life.”