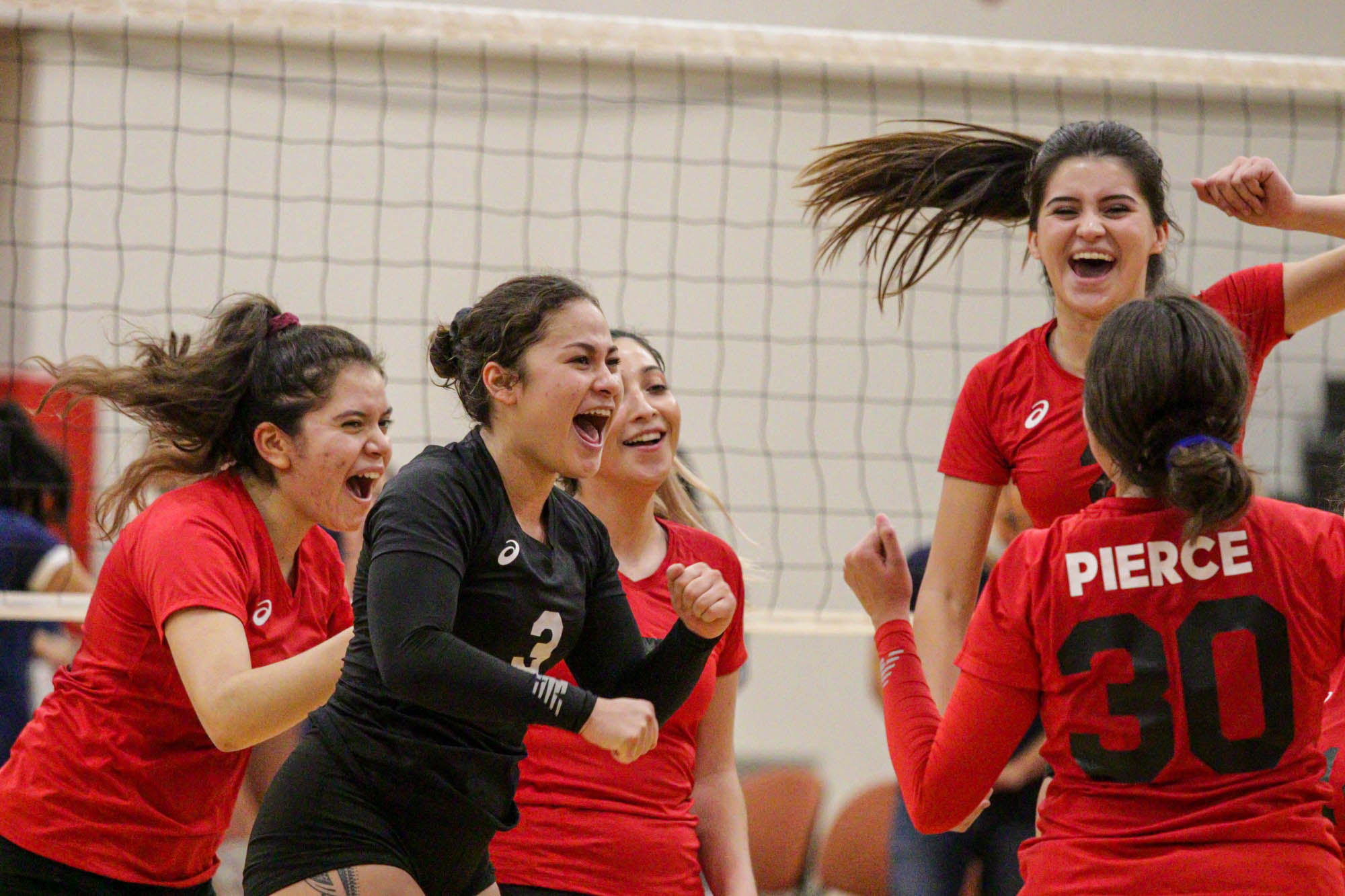 While some celebrated, for others it was a bittersweet return as the women’s volleyball team hosted the Mission College Eagles.

Mardini led Pierce to three state titles and 15 conference championships during his time as head coach.

“I’m happy to be here although it is kind of bittersweet,” Mardini said. “Especially when you look at the memories we have here. Although there comes a day when you have to move on.”

The game began with both teams exchanging points because of service errors, lack of communication or net violations.

The Brahmas kept pace with the Eagles, however Mission stepped up their offense after calling a timeout. They would end up winning the first set 25-19.

In the second set, the Brahmas changed several things and tried new tactics. They paid off as they would win 25-21.

Pierce women’s volleyball head coach Edison Zhou said he was happy with how the team responded.

“We really fought as a team. We improved on our serving and we had less service errors,” Zhou said.

In the third set, it was more of the same as both teams kept exchanging points. But, Pierce took advantage of Mission’s net violations and lack of communication to win the set in a nail biter.

The Brahmas began the fourth set on a 3-0 run. The Eagles however were far from done and ended up winning set four 25-23.

In the fifth and final set, with the game tied at 10 there was confusion between the officials as they gave the Brahmas a point.

Mardini questioned the call and after the officials spoke for nearly five minutes they decided to call for a replay without awarding a point to either team.

Middle blocker and opposite hitter Julia Nederlk said she was confused by the call.

“In my personal opinion there were a lot of questionable calls. What happened was there was a hit on our side and one of their players called out a touch with her mouth and one of the officials saw it on the line,” Nederlk said. “The down ref apparently did not and so there was a lot of back-and forth and they just decided to do a replay.”

After the confusion between the officials, the Eagles took advantage and took a 14-12 lead. The Brahmas immediately responded after violations were called on Mission.

Pierce took advantage of having match point and won the game after one of Missions’ players tried to go for the kill, but hit the ball out of bounds.

Nederlk said she was happy for the win and said it will improve their confidence.

“We learned from our previous games and I’m proud of how much we have persevered,” Nederlk said. “We learned our potential and I expect us to do even better in the next game.”

Zhou said they need to keep being themselves.

“We need to keep doing what we are doing and more wins will come along the way,” Zhou said.

Mardini said the Brahmas did a great job to get the win.

“We were a little too predictable and they did good in exposing our weaknesses,” Mardini said. They didn’t make a lot of errors.”

Pierce improves their record to 1-8 and are on the road on Wednesday, Oct. 27 when they face Moorpark College. First serve is at 6 p.m.