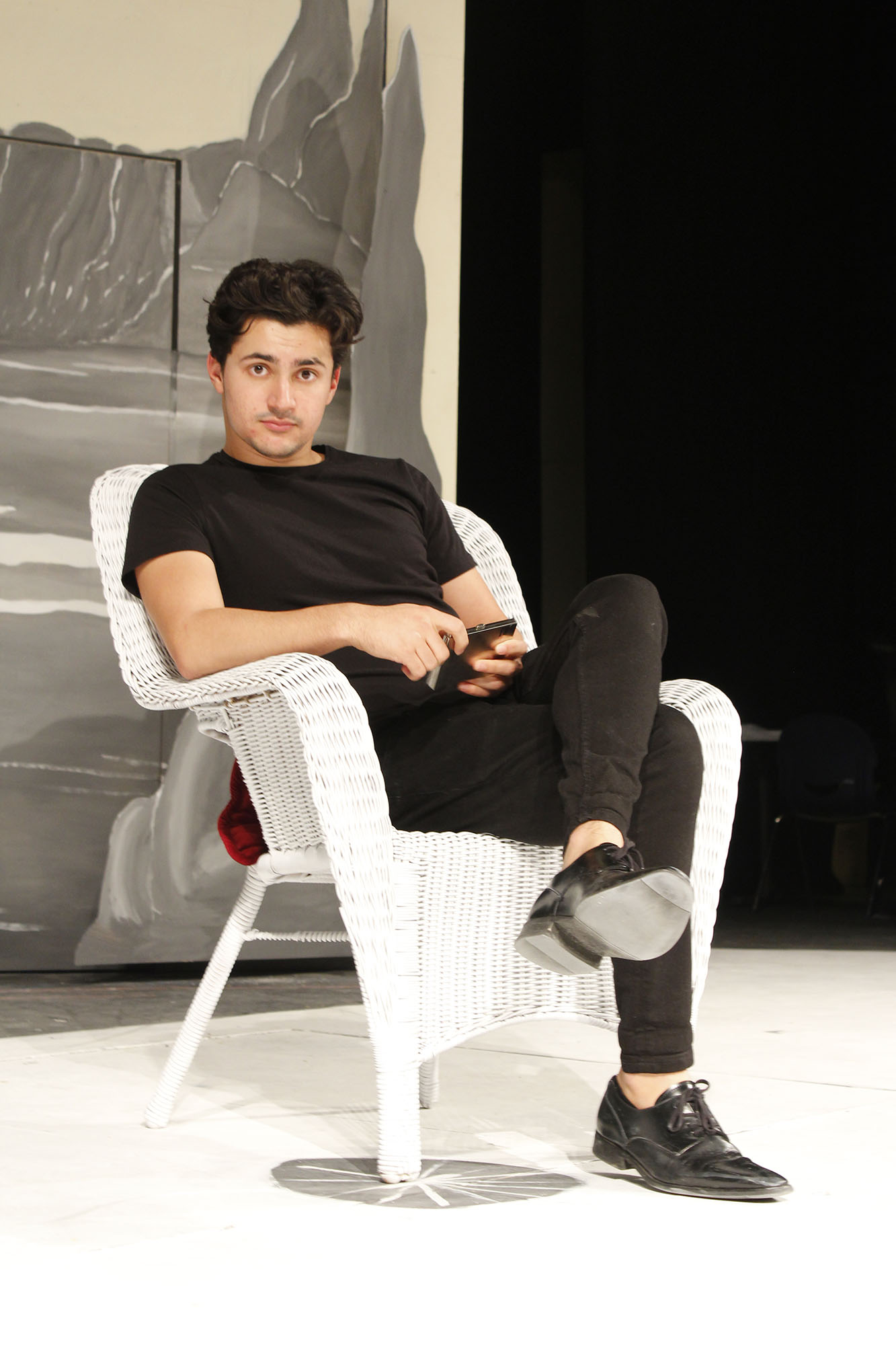 Kayvan Shai raises his eyebrow at the Performing Arts Building at Pierce College in Woodland Hills, Calif., on Oct. 14, 2021. Photo by Jasmine Casanova.

Kayvan Shai sits in a chair on stage at the Performing Arts Building at Pierce College in Woodland Hills, Calif., on Oct. 14, 2021. Photo by Jasmine Casanova.

(R) Kayvan Shai as Jack Worthing and (L) Tomas Ciriaco as Reverend Dr. Chasuble in LAPC Theatre's dress rehearsal of The Importance of Being Earnest at the Performing Arts Mainstage at Pierce College in Woodland Hills, Calif., Oct. 19, 2021. Photo by Ginina Pulcinella.

Kayvan Shai as Jack and Rachel Logan as Gwendolyn during dress rehearsal of "The Importance of Being Earnest" at the Performing Arts Mainstage at Pierce College in Woodland Hills, Calif., Oct. 19, 2021. Photo by Ginina Pulcinella.

Kayvan Shai sees a lot of himself in Ernest, the lead character from Oscar Wilde’s “The Importance of Being Earnest.”

He said it was difficult for him to socialize and open up, especially when he attended his first parties during high school.

Shai said he was unsure of himself and realized that he couldn’t allow people to define his worth.

“I think it was just me realizing that these people were most likely not going anywhere, and those people tried to talk to me in a friendly way, but I don’t take it as them being genuine. I take it as them feeling bad about what they did,” Shai said.

Shai said that it took him several years to learn how to be confident and to figure out what he wanted.

“I was always a performer, always doing stuff outside the box, and I was confident but not truly confident. It took me time to warm up,” Shai said.

Currently, Shai is taking classes at Playhouse West in North Hollywood twice a week while being a full-time student at Pierce.

“It’s like eight hours of acting a day, and then trying to fit homework here and there and it does suffer,” Shai said.

He said he barely has time for his friends and family.

“There’s just no way to have everything,” Shai said.

Besides taking classes at Pierce and at North Hollywood, Shai said that he’s auditioned for short films and other productions, including a show on HBO.

“I’ve auditioned for a lot of professional work and it’s very difficult since there’s a lot of competition, especially now because of self tapes,” Shai said.

Initially, Shai was eager to leave Pierce, but he found himself enjoying a Theatre 101 class taught by Theatre Professor and Director Shaheen Vaaz.

“The first time I sat in Shaheen’s class, I remember hearing what she said about acting and it almost brought tears to my eyes,” Shai said. “And that’s when I realized this is what I want to do.”

Shai is playing a character named Ernest. He said he felt connected to him and found his strict nature and short-temper to be funny.

According to Shai, he auditioned for Ernest through Zoom, got called back twice and then got casted to play him.

“He’s very good, quite easy to work with and he’s incredible with taking the words on the page and making it his own,” Vaaz said.

LAPC theatre didn’t charge for any of their Zoom performances held last year and since the budget is limited, Vaaz said the theatre has to work with what it had.

“We wanted to build a set that wasn’t too expensive, and set designer, Gene Putnam, came up with this idea of a pop-up storybook and everyone loved it” Vaaz said.

But setting it up wasn’t easy, according to Theatre Department Chair and Professor Michael Gend.

“There was some trial and error and when you’re building them on a large scale out of lumber you run into unforeseen consequences,” Gend said.

While rehearsing for the role, actors wore masks while delivering their lines and Shai talked about how it was a barrier.

“We had to have masks on but, when we are performing we’re not going to have the masks on,” Shai said. “It’s a pain in the ass, and I hope that it doesn’t last.”

Shai said that by working on himself and through performing, he’s learned to accept himself.B

“Now I’m just my own person,” Shai said. “So I don’t need validation from anyone as I have my path and my purpose, and that’s what I’m really focused on.”