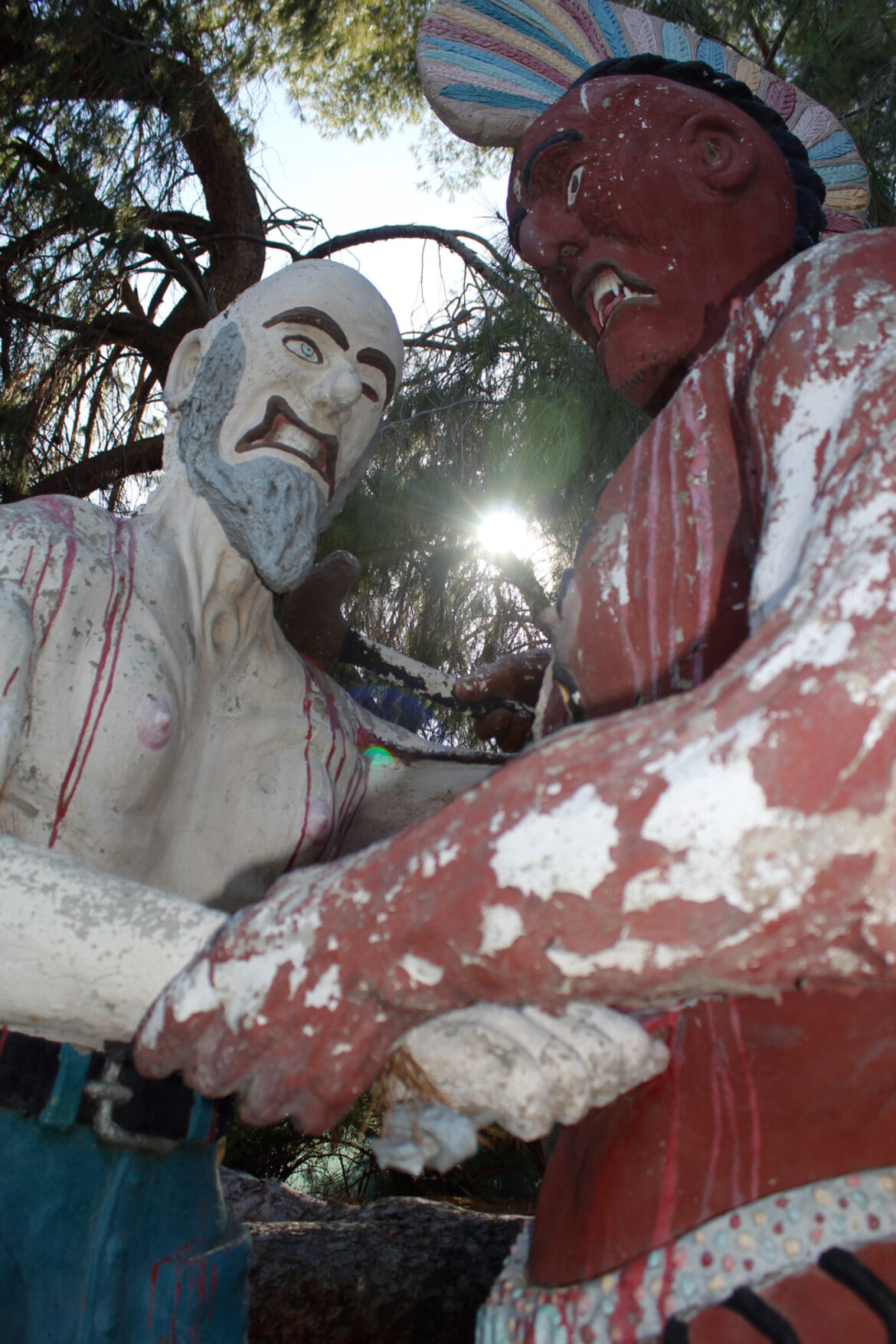 In an age where Christopher Columbus statues are being removed for his abuse against Native Americans, an age where George Floyd’s death sparked the toppling of Confederate monuments, Pierce College remains the home to problematic historical landmarks that are nothing more than an offensive product of a different time.

The Old Trapper’s Lodge folk art statues, located near the Farm Center, continue to burden the school after the final stages of the removal were suspended indefinitely earlier in the year.

Interim President Aracely (Ara) Aguiar said that a deal for the removal of the statues became null and void.

According to Aguiar, district general council has sent out formal letters to the family of the original owner of statues, John Ehn, to make a decision about what the next step is going to be.

“We are making every effort to make sure that the family gets the collection,” Aguiar said. “We offered a 60 day timeline so that the individuals can make a decision.”

Aguiar added that one way or another, the statues are going to be removed.

The college does not want sculptures that are demeaning to Native Americans.

About a year ago, Pierce’s history Professor Brian Walsh found someone to take them—Valley Relics Museum, who was given the opportunity to remove the statues.

“We are the preservationists of The Valley,” Gelinas said, the curator and founder of Valley Relics Museum.

According to Gelinas, John Ehn’s family had the best-case scenario. The statues would have gone to North Hollywood to the museum’s 20,000 square foot facility, where they would have been restored from their weather-worn condition.

By now, in Valley Relics Museum’s timeline, the non-profit would have removed everything. The statues would have been restored here and they would start putting in pieces that were not hurtful to indigenous people.

“I wanted to make sure that these were represented properly not only for the family but for the community – with the proper history behind it,” Gelinas said. “I came in and said I would handle it—that I would figure out if the sculptures were going to go back out.”

Gelina’s goal was to start telling the story that John Ehn loved cowboys and Indian art.

The removal process was challenging. 40 years after their move to Pierce, trees and bushes have all grown in and around many of the sculptures.

Valley Relics completed the first phase of getting all the little pieces out to make room for the large statues to be craned out. They removed the cement headstones, the wood headstones and wooden signs, and they are now housed in their warehouse.

“We probably have about 20 of those items,” Gelinas said. “We didn’t touch any of the big statues. That was the next phase.”

At this point, the non-profit has spent $15,000 in addition to volunteer time.

Then, according to Gelinas, the sightseeing tour agency Esotouric Tours interjected themselves in the middle of the progress when they assessed pictures of the removal posted by one of the Valley Relics volunteers. After that, Galinas backed out of the deal.

“Once Esotouric got into the ears of Ehn Family, and once the family started talking to council, Wolf and I did not want to go down that path,” Gelinas said. “The last thing I want to do is go to battle with a Los Angeles tour company.”

Gelinas said that at this point, it is up to the family to decide what to do with the statues, and his hands are washed off the project.

The Old Trapper’s Lodge is a designated California Historical Landmark.

Walsh said that the designation makes it a logistical and bureaucratic issue.

“It’s going to cost money to get rid of them,” Walsh said. “We are past the question of the statues staying on campus. Now it’s just a question of how do you physically remove them.”

Tombstones and signs may have been removed from Pierce grounds, but the fact remains that the most offensive pieces depicting indigenous people as savages continue to cast a shadow.

“In a time when people started tearing down confederate statues of slave owners, we still have statues up that are a fictional representation of the indigenous people,” Sociology Professor James McKeever said. “It is insulting, it is wrong, and they should not be on our campus.”

“I don’t want to return from sabbatical and see them there,” Walsh said. “But if they are there, I will have class outside and we will have something related to that in my lesson plan.”