The fans were cheering as the Brahmas tipped-off their seventh basketball game of the season Friday against the Los Angeles City College Cubs, but later suffered a disappointing loss of 55 to 56.

The first half of the game went to the Brahmas, who had a 12- point lead over the Cubs by half time.

When the Brahmas came back for the second half, they seemed too comfortable with their 12-point lead. A few of their plays got sloppy and points were easily lost.

Defense kept strong but failed to keep up the magic from the first two quarters.

“We played really hard but down the stretch we couldn’t make enough plays.

“It was a really tough loss for us,” said Coach Ed Babayan after the loss.

“We played great defense. The defense is why we had a chance to win at the end.”

The game against the Cubs also gave the Brahmas their lowest total points in a game since the season started in November.

“There was a tenacious dunk made by Donald Lee, a sophomore forward. Chris Jones and Jonathan Johnson also played well.”

The Brahmas had been riding high after their double wins at the College of the Desert Tournament in Palm Desert against Miramar College on Nov. 17 and 18.

Their record for the season is now four wins and three losses.

The Brahmas are currently at the Riverside Tournament until Saturday. 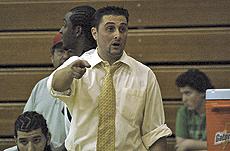 Basketball head coach Ed Babayan at the Nov. 8 game against College of the Canyons. The team is currently was 4-3 going into yesterday’s Riverside Tournament. ()