The Brahmas’ women’s volleyball team went all the way to the state finals in Fresno last weekend before losing to Orange Coast College in the championship match.

“It was the best season ever and we had fun,” said Bea Ramos.

This marked the first time in school history that the women’s volleyball team advanced to the championship.

The Brahmas had a year that featured their sixth straight Western State Conference Southern Section title with a 21-3 season record.

Pierce also won both home playoff games against Long Beach City College and Citrus College to make it to Fresno.

Their overall playoff record was 5-1.

“I am very proud of these ladies, they had a great season. I was impressed, they played hard and never stopped,” said Head Coach Nabil Mardini. “We had a cohesive unit and they all knew their role.”

Pierce defeated Shasta College in the first round of the Women’s Volleyball Championship in three straight matches.

Jackie Tomas had 46 assists and Tara Henn also had 11 kills as the Brahmas advanced into the next round.

They matched up against El Camino in the second round and won the game 3-1. Tomas lead both teams with 67 assists and Rice had five aces. Lugo-Brown had 25 kills, Ashley Murray also had 16 kills and Jenna Novelli pitched in with 12 kills.

Henn contributed with three aces along with 15 kills for the Brahmas as they advanced to the semifinals against San Diego Mesa.

The Brahmas once again got key assists from Tomas, with 61.

Luisa Umana had five aces and Rice had three aces as the Brahmas rolled on. The kills were evenly distributed in this match as Brown and Murray both had 15, Henn had 13 and Novelli and Kristin Gorman had 11 each. 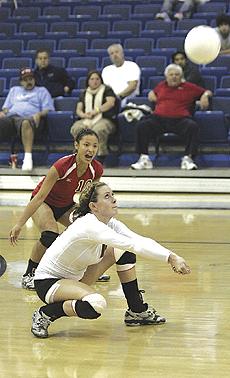 Pierce College’s Meredith Rice digs the ball with encouragement from teammate Romina Ignacio at the state finals in Fresno. The women’s volleyball team placed second after losing to Orange Coast College Sunday. They finished the season with a record of 21-3. (Jared P. Meyer)