The garden is named after the S. Mark Taper Foundation, which is known throughout California for its donations and its work with various organizations, such as arts, domestic abuse and community development programs.

Nearly 40 people were at hand for the event with pastries and beverages provided by the Freudian Sip.

Robert Garber, Pierce president, presided over the opening ceremonies that marked the occasion.

“We are thrilled this day has finally come,” said Garber. “We took advantage of this opportunity to create a place where the environment, people and education can come together and prosper.”

James Rikel, professor and chairman of the life science department, was very enthused about the project.

“We have spent so many years on this project that began in 1998,” said Rikel. “It was very emotional. So much personal energy, physical labor and maintenance were put into this.”

Darroch “Rocky” Young, chancellor of the Los Angeles Community College District was president of Pierce when plans for the project were first introduced. He was very happy the plans were finally brought into play.

“This project was accomplished through the efforts and partnership of the faculty,” said Young. “It was a collective effort, completed with the approval of the state. We didn’t want to constrain the passion and creativity of the faculty. The garden is for both the college and the community.”

According to Kate Kubach, professor of life science, the new garden will house various species of plants one of which will include one on the world’s oldest and rarest trees the Wollemia nobilis, which was first discovered in the Blue Mountains west of Sydney, Australia.

Students who are familiar with the shortcut, which leads from the Life Science to the Mathematics Buildings, will find the route circumvented when the construction begins within three to four weeks. However, Kubach said that an alternative route would be available to students called the “Evolution Walk.”

This new feature will include a cement pathway with fossils depicting evolution which students can observe as they walk to class. This walkway will be a timeline of the history of life and the passage of time. This is just one unique design of the many beautiful features this garden has to offer.

There will also be three shade structures in various areas of the garden that will be mission-styled, a Natural Stone Amphitheatre that serves as an outdoor classroom in the natural landscape and a “Writer’s Circle” to provide students with a peaceful, quite study setting.

Pat Farris, professor of biology, Rikel and Kubach were the main contributors and designers of the botanical garden.

“Pat, Kate and I have spent so many years getting this garden built that until it began to be used we never realized what a wonderful place of learning and peace we were creating,” said Rikel.

The project is expected to be completed in 2009. 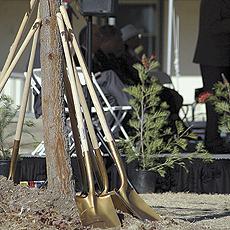 The groundbreaking ceremony for Phase II of the botanical garden was Friday. The entire garden is expected to be completed in 2009. ()

Application deadlines for six University of California (UC) and California State University (CSU) campuses have been extended past the Nov. 30 deadline, according to...
Read more
News

CalWORKS joins the season of giving

College can be difficult for anyone, but it can be especially challenging for students with children.  CalWORKS is a state-funded program that provides financial assistance...
Read more
MORE STORIES