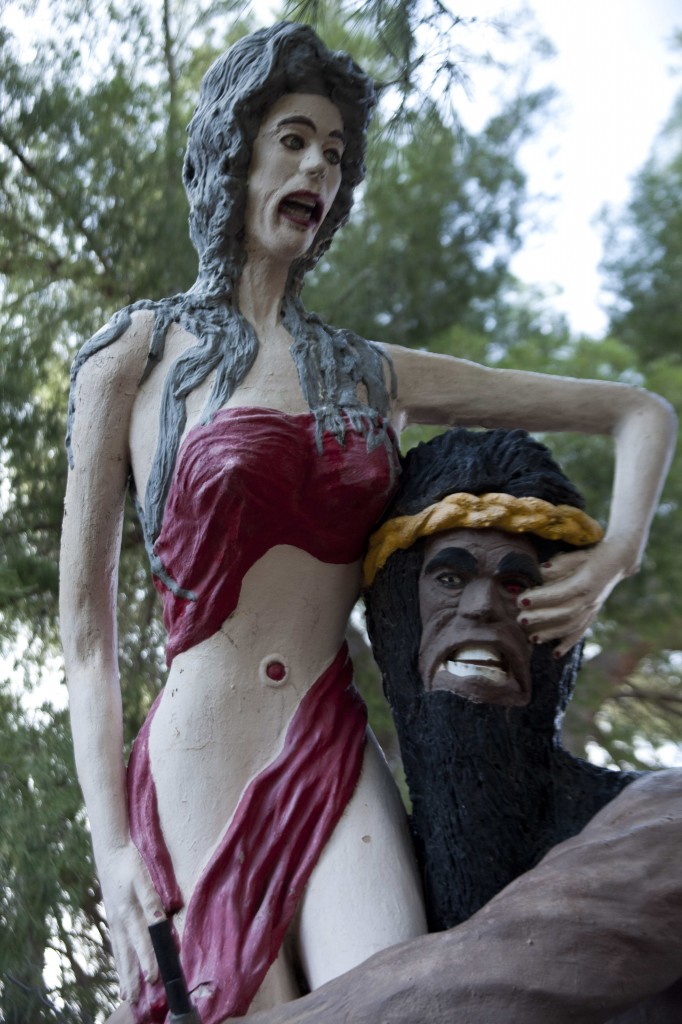 Next to Parking Lot 8, hidden behind a red chicken coup, next to the farm, a state park sits in a little used corner of the campus.

Known as The Old Trapper’s Lodge, the park was designed by artist John Ehn to give the viewer a sense of the old west as he saw it.

Although hundreds of students pass by every day on their way to class, few have ever wandered over and gazed at the statues depicting life in the old west.

“I’ve always wanted to explore it, but I was afraid of getting cited,” said Fabian Suazo, a 26-year-old automotive major. “I’ve been wondering what the statues are there for.”

Ehn used members of his family to model his statues after and scattered memorabilia, such as rusted farm implements around the grounds, to help capture the authentic western feeling.

The statues, showing cowboys, Indians and other western characters, are scattered around the park in various poses including two who are locked in combat. The statues of a settler and an American Indian help tell the story of a battle also depicted on a tombstone in the park’s boot hill.

The boot hill is a mock graveyard depicting wooden tombstones written in the colorful style of the era they depict.

Looking out at boot hill while sitting at one of the park’s picnic tables underneath its many shade giving trees, it’s possible for park visitors to forget they are in one of the largest college campuses in California.

“I wish I’d known about [The Old Trapper’s Lodge] before. I would have been able to appreciate it more,” said 24-year-old sociology major Jake Solomon. “I’ll definitely pay more attention to it next time. I mean, it’s another special thing that makes this school what it is.”

The park, a California registered historical landmark, was first brought to Pierce by Richard Moyer, who was an assistant Dean at the time, according to Larry Kraus, associate vice president of administrative services.

Although on college property, Pierce is not responsible for maintaining or cleaning the park, according to Paul Nieman, director of facilities. It is however, responsible for keeping the park safe, which means protecting it from ongoing construction.

Despite its obscure location, a few students and faculty are aware of the old west park.

“It’s a bit intimidating, but fascinating at the same time,” said 19-year-old Leandra Alex, who discovered the park through a friend. “There should be more advertisement for the park. I mean, that’s why I went [to see it] – because I found out about it.”