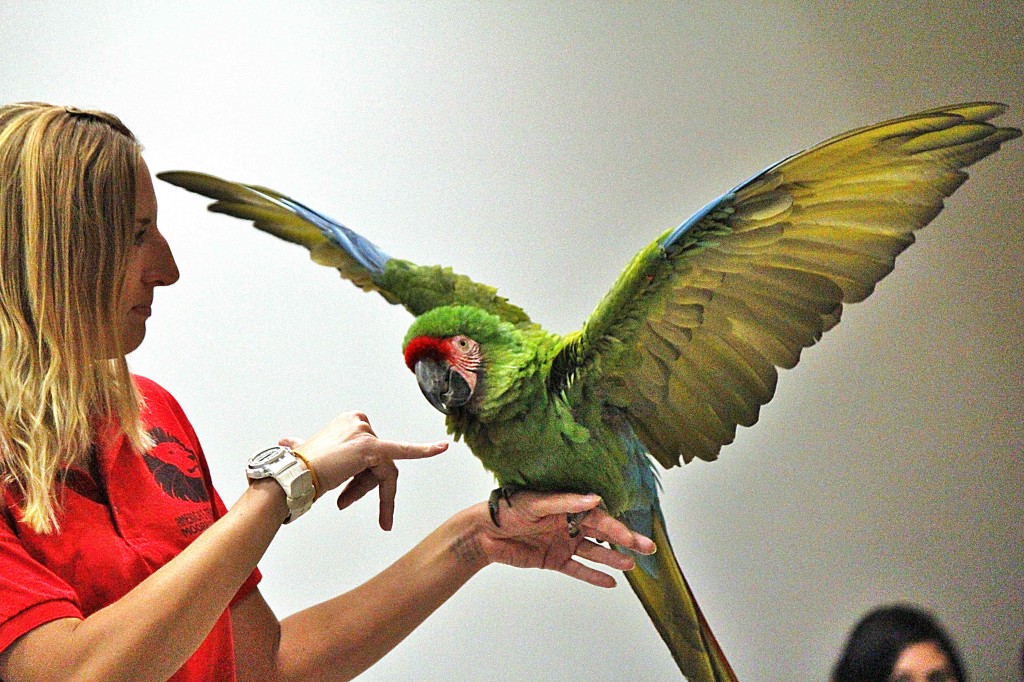 Candace Shelton, of the Exotic and Animal Training and Management Program at Moorpark College, with a military macaw in front of an audience that included middle and high school students and all the presidents from the Los Angeles Community College District in the Center for Sciences at Pierce College in Woodland Hills, Calif. on November 4, 2011. Photo: Javier Zazueta.

A falcon, a macaw and a California king snake shared the stage in a presentation by Moorpark’s animal outreach program as they spoke to a room full of students during Friday’s presentation at the Center for Sciences.

Presidents and vice presidents from across the LACCD, along with the chancellor also attended the presentation along with 30 Canoga Park High School students.

The group of Moorpark students, who are enrolled in a program called America’s Training Zoo, gives outreach programs to the public while training to be pre-veterinary majors.

“They’re practicing their outreach on us,” said Leland Shapiro, chair of agriculture and natural resources.

When not giving outreach demonstrations the group spends nine hours every day taking care of the animals at the Moorpark zoo, according to Fike.

The high school students in attendance for Friday’s event were part of a program, funded by the United States Department of Agriculture, to train pre-vet majors, according to Michael Flowers, coordinator of special projects.

The group explained that there were many different opportunities for those with veterinary degrees including training animals for movies and TV.

Many of the animals at Moorpark’s zoo are rescue animals who can’t survive in the wild or are surrendered to officers or donated by the public, said Fike.

“Most of us think that these animals should be out in the wild,” explained Fike. “It takes a lot of effort to rehabilitate an animal, especially if you don’t want to get them used to people.”

The group explained that pre-vets often become conservationists as well. Being a conservationist means not only recycling but also making the most of our planets resources by buying the best product possible at the time to avoid rebuying that item soon afterward.

“You get to be greedy and buy a great TV at the same time,” said Werner.

Pierce once had its own animal outreach program called The Circus Wagon, which showed off animals like brahma bulls and took animals to nursing homes. The program ended in the early 80’s, however, as funding disappeared, according to Shapiro.

“We educate people about animals in order to save them,” said Fike.