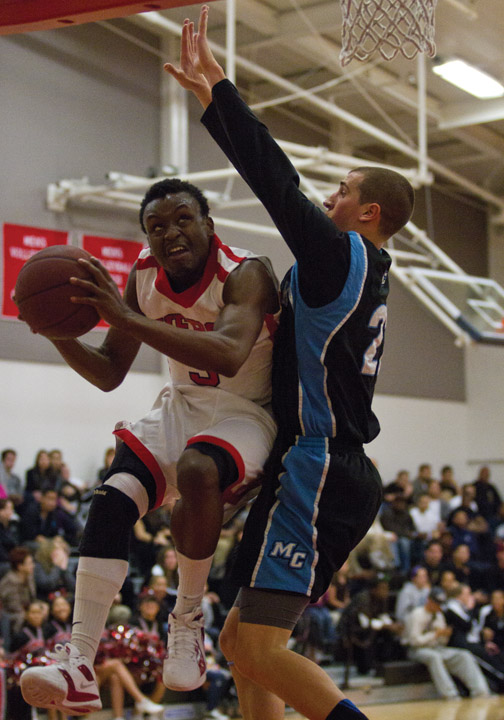 After a tough second half and a rough completion, Brahmas men’s basketball team won its match Tuesday against the Moorpark College Raiders.

The team started out strong in the first half but throughout the second half not as many attempted shots were made and the Raiders took advantage of the rebound opportunities.

The Brahmas finished on top with a final score of 75-70.

“We took a couple of ill-advised shots and made a couple plays defensively that we usually don’t, that allowed them to creep back in every time we tried pulling away,” said Pierce head coach Edward Babayan.

Overall Babayan was really happy with his team’s performance and thought they did well .

Even though the Brahmas have two more conference matchups left in the season, it is unlikely that they will make it to a championship without a couple of losses from other teams.

“I need to work on being patient with the ball and controlling the tempo better so we can execute throughout the game,” said freshman guard Khiry Williams. “We didn’t stay patient in the second half, but then we just adjusted to the other teams pace.”

Sophomore Josh Thomas was very active in putting points on the board throughout the game and is staying positive in order to prepare for the next one. Thomas makes an average 16 points, seven assists, and three steals per game.

“I think we worked as a team the whole game and stayed in it,” said Thomas. “We’re gonna practice everything and work hard all week for the next game.”

The Brahmas will play at home again this Saturday the 11th against Cuesta College.