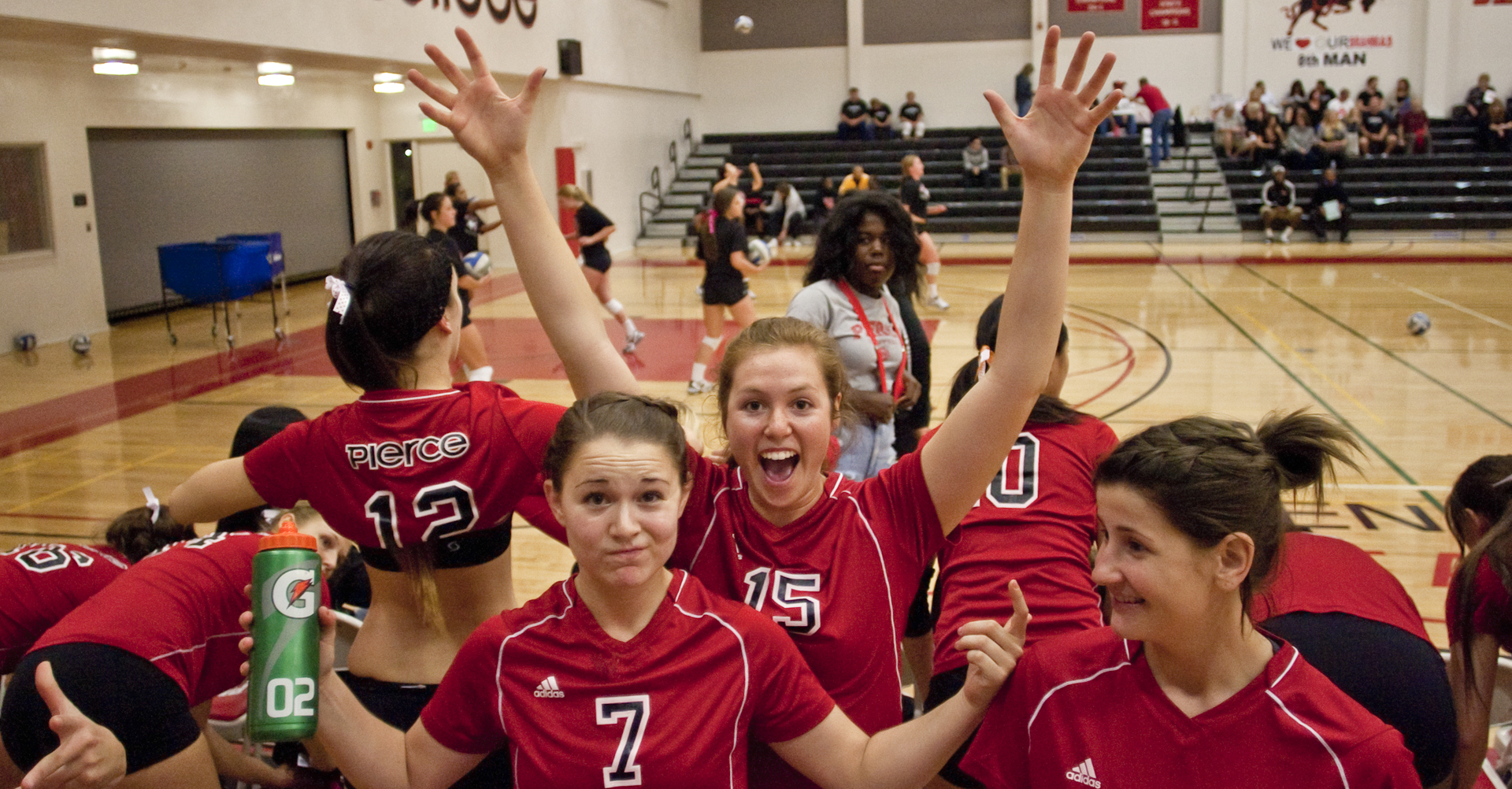 Power. Harmony. Terrible, crushing poetry in motion. The Pierce College women’s volleyball team embodied this Friday night as they won in straight sets (25-18, 25-19, 25-18) at home on Ken Stanley Court against the visiting ladies of Bakersfield College inside the South Gym in Woodland Hills, Calif.

Head coach Nabil Mardini knows all too well what complacency can do to even the most battle-hardened team, and warned against letting previous good fortune get in the way of their goals.

“They said we were ‘ripe for a loss’,” Mardini told his team in their pre-game meeting.

Some shook their heads, others smiled humbly.

“No, it can happen, just like that,” Mardini said. “Just go out there and do what we do.”

The Renegades (16-5,) still salty after taking only one set in their last three matches against the big red machine, came out with power of their own, going up early in the first set on Oct. 26.

It took off with both teams trading the lead numerous times before the defensive efforts of outside hitter Danetta Boykin– who had 17 kills on the night– helped put the Renegades on their heels.

Setter Jannelle Futch put 33 assists on the board, rounding out the devastating Pierce offense, while injured middle blocker Jessica Burns cheered from the sideline.

Burns, who sat out the match after she re-injured her ankle, said it was hard not to play.

“We play for each other,” Burns said. “If I can’t be out there, I want to be an exceptionally great teammate.”

The high degree of individual and team coordination from both squads kept the action fast-paced right from the start.

In what seemed like the blink of an eye, the first game was in the books.

Boykin had three straight kills early in the second game, flustering the Renegades’ offensive efforts from the jump.

After a 6-3 lead and five aces in one possession by Futch, the Brahmas’ offensive and defensive rhythm started to work toward their advantage.

Net serves and low spike attempts didn’t stop Bakersfield’s drive, and the ladies from up North mounted a comeback, scoring some badly needed points to bring the mid-game score to 12-8.

The Renegades, sparked by a few untimely Brahma errors and some legitimately outstanding play, kept the pressure on.

Sakuraku Fujii, who racked up 8 kills of her own, couldn’t quite find the sweet spot and ate a couple of solid spikes from the emerging underdogs.

Just as the Renegade plan started coming together, the Brahma plan began to show signs of imperfection.

But Boykin and Futch wouldn’t have it.

The rally spread throughout the team again and within moments, the blur of scoring was over.

With an ace from Fujii and a quick set point, the Brahmas pulled out another tug-of-war win, 25-19.

As the final game began, Bakersfield was riding a wave of momentum usually reserved for those who had won the previous set.

They had fought hard throughout the second game, and they had exploited some of the mistakes Pierce had made along the way.

Their explosive offense was firing on all cylinders, and the Renegades jumped to an early 3-1 lead.

Fifteen seconds later, the Brahmas had recaptured the lead, and the momentum.

Both teams sizzled, and the final set felt more like a battle of wills than a battle of teams.

Fujii’s timing was off, and Renegade finishers were pinpointing their attacks on her.

But the beauty of team sports is that Fujii, who didn’t have her best night, was surrounded by the best volleyball players in the state.

The momentum for both squads bordered on red line, with the mid-set score tied at 13.

And then it happened– again.

The Brahmas came out of their huddle with the same intensity they are somehow always able to dig deep for when the game is on the line.

It was just a steamroll for the last few minutes.

Bakersfield held their heads high, but it was still their fourth loss in a row to the Brahmas.

Renegade head coach Carl Ferreira was happy with the way his team executed their strategies, and knew what turned the tide in each game.

“The number one thing is that they serve extremely well,” Ferreira said after the match. “We sustained it really well, but they pressure our passers and it throws off our plan.”

With the amount of film they have featuring the Brahmas, and their previous meetings, there is definitely a familiarity between the two organizations, according to Ferreira.

“There is a lot of mutual respect here,” Ferreira said.

When asked what changes he might make, the coach– now in his 7th season– was philosophical in his approach.

“You can’t coach with a rear-view mirror,” he said. “We know our strengths, and we will continue to play to that.”

With a bye coming up, the ladies of Ken Stanley Court could kick back and let it all go to their heads.

But that is not what champions do.

Libero Danielle Hochman is already looking forward to their next practice.

“After winning tonight, I’m focused on Monday’s practice,” Hochman said. “It won’t matter that we won this one.”

For his part, coach Mardini took his team’s accomplishment in stride.

It’s a long, draining season, but to watch the women’s volleyball team is to watch pure energy, even this late into the game.

After 56 matches in a row, they still want more.