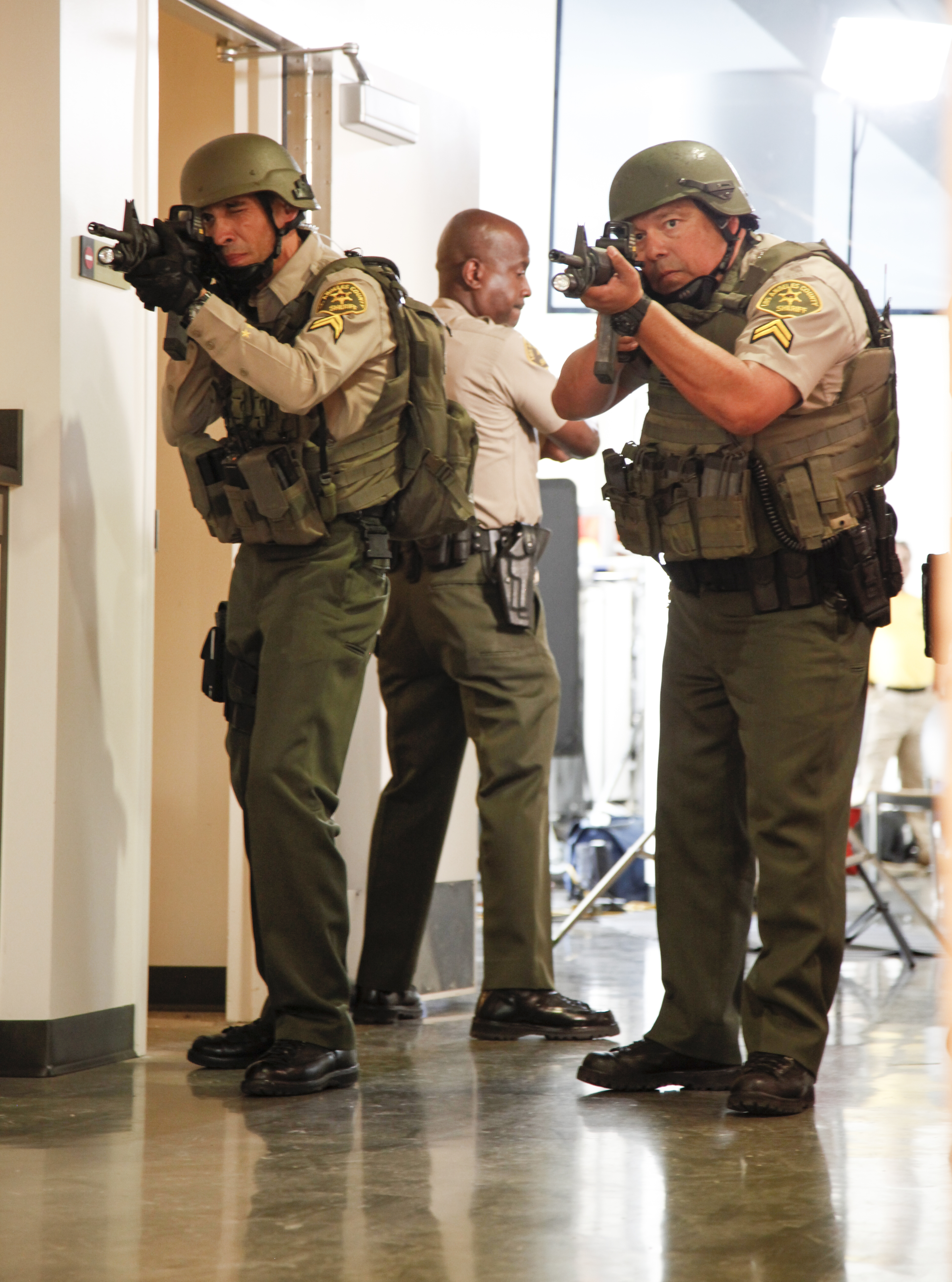 Several people every year are caught in the fire of school shootings, more than 30 already this year. The Los Angeles Sheriff’s Department believes that if the public becomes more aware of how to survive, the mortality rates of school shootings will fall.

“There is very little training for the public available for how to survive these shootings and the most compelling reason to do the video is the overwhelming majority of these situations,” said Sergeant Harry J.K. Drucker of the Los Angeles County Sheriff’s Department Administrative and Training Division, Video Production Unit.

The Video Production Unit officials conducted a three day “Active Shooter” filming April 8 – 10 at Los Angeles Valley College among a few other locations in hopes to produce a film to prepare the public and deputies on how to deal with an armed gunman.

“It was a collaborative idea between all of us. We saw a need for this type of a video and we are really all about trying to help people, as a law enforcement agency should be,” said Deputy Ralf Paddock, of the Administrative and Training Division, Video Production Unit.

The goal of the videos is to prepare school officials, community members, and police to react effectively in an active shooter situation.

“They are rare but do occur and are over and done with before the police get a chance to respond,” Drucker said.

The film has a $25,000 budget, made possible by donations and more than 90 percent of the crew being volunteers, including the actors.

“Our big thing was that we wanted to do something that would help people. A lot of things we had heard was that people said after they had been involved in these incidences that they didn’t know where to go, they didn’t know what to do,” Paddock said.

The team of LASD deputies and professionals in the film business worked together to create a video that shows different scenarios in which an active shooter would be involved, one being at a school.

“This has become in some ways the car alarm syndrome. When car alarms first started being put on cars and people would hear it and say ‘Oh someone’s breaking into that car’, now it’s like ‘Can somebody shut that thing off’ and they don’t look to see if someone is breaking into the car or not,” said Drucker. “So God forbid these situations turn into that ‘Oh, it’s just another active shooter.’ We hope that this video will help people nationwide.”

The LASD will put the video on Youtube and plans to embed it into the LASD webpage and County of Los Angeles webpage by this fall or as early as the end of summer. There will be two videos, one for the public and one that will be used to train deputies.

“We did tons and tons of preparation. We had hundreds of pages of documents of actual events that happened and we did some [research] for the technical stuff, looked at other shows and movies to see how they did certain things effectively,” said Deputy Vance Kotrla for the LASD Video Production Unit and director of the film. “We have a technical adviser as well from the Sheriff’s Department so everything we’re doing, all of the movements that the deputies are doing, we can verify they’re doing them correctly so we’re not sending the wrong message.”

Many of the film’s crew and cast members took classes at colleges in the Los Angeles Community College District, including Pierce College, making the film even more meaningful to them.

“I think it’s so important to make sure that you have the skills to survive,” said David Lautman, the actor who plays the active shooter in the film. “You know, something like Columbine is a perfect example of law enforcement and faculty not being ready to deal with the problems and with the situation.”

Playing the part of someone who would commit a shooting on campus is a serious role that Lautman said gave him a surreal perspective.

“It puts you into the experience of what unfortunately does happen in real life,” Lautman said. “As an actor, more so than a regular civilian, you don’t get the opportunity to actually see through your eyes and feel what it’s like to be in the zone of a killer and it’s just kind of sobering.”

“What we’re going to be educating people in the video is situation awareness and location awareness,” said Drucker. “What I mean by situation awareness is you go through your routine and something’s wrong, human beings do have somewhat of an intuition and they should pay attention to that. They should pay attention to things that they see that don’t seem right, or don’t seem normal and react to that whether that is just to keep observing, or call somebody, or just get away.”

The team is basing some of its film off a similar one called “Run, Hide, Fight” made by the city of Houston, but plans on making some improvements. The film has more than 2.5 million views on Youtube.

“‘Run, Hide, Fight’ is very good and the concepts are really good but I think ours will be more for a younger audience with more of a variety of locations and more relatable people to the audience,” Drucker said. “People will hopefully be telling their friends to look at this video.”

Another difference between the two videos will be the special effects, with guns being fired with blanks and fake blood splattering that were not done in post production.

“Even though we’re doing a lot of things that are action movie things, we’re trying very hard to make none of that look glamorous,” said Kotrla.

The hope is to engage the public to discuss the situation and consider what they might do in the event a shooting occurs on their campus according to Eric King, director of photography for the Video Production Unit.

“This is about having people engage in conversation. There’s no one panacea that’ll say this is the perfect way to train,” King said. “If you tell somebody, they will forget. If you show them, they might remember. But if you engage them, they’ll understand. If they can engage in this video and it gets their attention then we’ve done our job.”