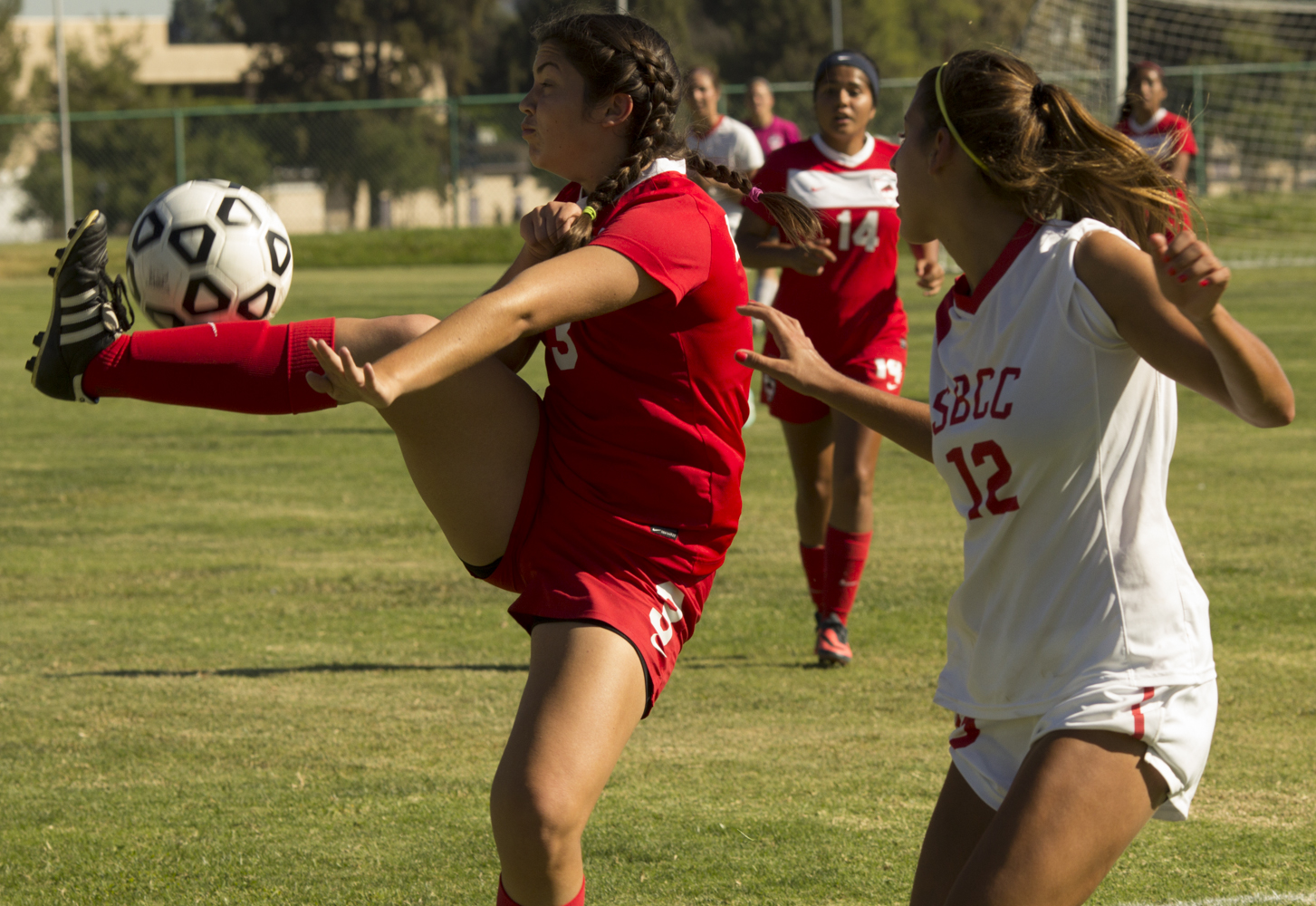 Pierce College freshmen Claudia Perez and Paige Wolny combined for a late goal as the Brahmas settled for a 1-1 tie with the Santa Barbara Vaqueros on Oct. 7 in the Pit at Pierce College.

Wolny scored the Brahmas only goal, but it was Perez who did the majority of the work on the play. The ball was dribbled to the corner of the field where Perez kicked it high into the air for Wolny to head-butt the ball into the goal.

“Soccer’s a team sport, you play for each other,” Perez said. “It’s the assist, but she finished it off. We work and the goal comes out when we work together.”

Ties are apart of soccer, but the teams fourth tie of the season is beginning to frustrate them.

“We’re trying to get some wins, we’re working on getting there,” Brahmas Defender Stefany Soto said. “But yeah, I’m pretty tired of it but we’ll get there.”

In the 25th minute Vaquero defender, Sandy Grimaldo, scored the first goal to give her team the lead in the first half.

Soto had one of the best plays of the game in the first period. A Vaquero was on her way to putting Santa Barbara up 2-0, when Soto positioned herself by the Pierce goal and head-butted a shot away from the goal and back towards midfield.

Pierce coach Adolfo Perez was clear about the lack of scoring opportunities for his squad and the presence of the Vaquero defense.

“I think it’s a little frustrating because we work on it [scoring goals] every single day,” Perez said. “We knew how they were going to be physical.”

Late in the second half, Wolny had the chance to give her team the 2-1 lead, but she sent the ball straight into the hands of Vaquero goalie Karin Nordin. That play ended up being the closest the Brahmas would get to scoring a goal for the rest of the game.

Even though Pierce put together a commendable effort on both sides of the ball, Brahmas defender Desiree Raygoza knew that her team should have won this game.

“I know we can do better as a team, but we’re gradually getting there, she said. “We have the skill.”

The Brahmas women’s soccer team will travel to Santa Maria to take on the Allan Hancock Bulldogs at 2 p.m. on Friday, Oct. 10.