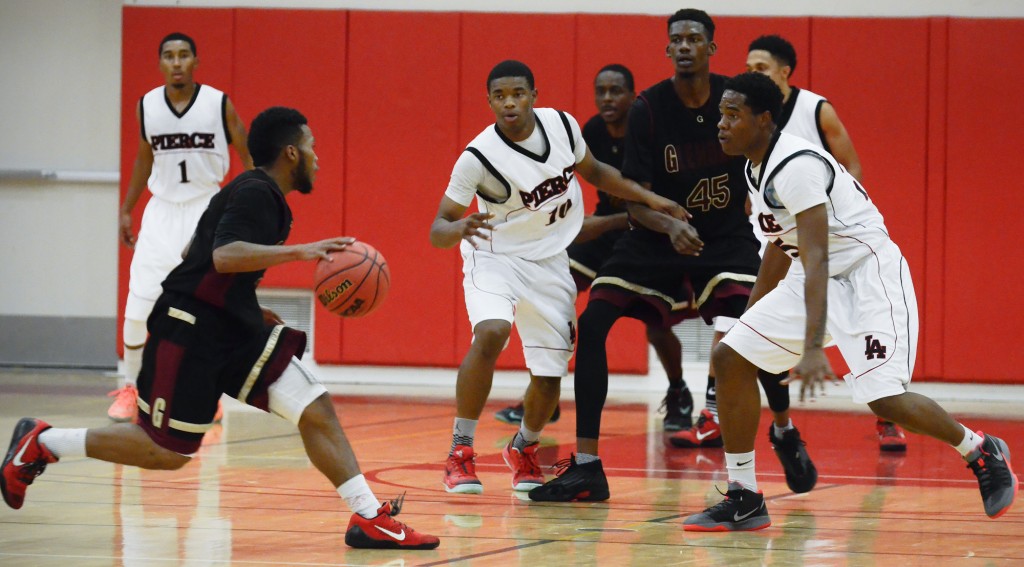 The Pierce College men’s basketball team defeated the Glendale Vaqueros in its first home game of the season on Thursday, Nov. 20.

The Vaqueros played a close game in the first half, until Brahma point guard JR Williams hit a three point shot that changed the tempo.

The momentum gradually grew after a free throw by freshman forward Kaelen Hicks.

Glendale picked up an offensive foul and Pierce freshman Malik Johnson capitalized on the opportunity. He shook two defenders to receive a pass from Hicks at the three point line.

“Staying active, playing defense and rebounding is one of my main sets,” Hicks said.

“That’s how I get on the floor. I’m not necessarily looking for mine. I just want to do the little things that I can control in the game. It’s all about the team win for me.”

That’s when Williams turned up the heat.

Williams hit another three point goal from the top of the key with only four seconds left on the shot clock, scoring 13 points in the first half.

“We started off good, but as the game went on things started to slow for us defensively,” Williams said. “We just had to pick it up. At the end we locked down and got the stops necessary to get the ‘W’.”

By halftime Pierce was able to maintain a 37-27 lead over the Vaqueros.

The Vaqueros continued to lessen the lead held by the Brahmas, when Glendale freshman Cornelius McClain stole the ball to assist Dillon Biggs on a slow dunk.

Pierce Brahma Moore stepped in to answer with a three point goal from the right wing.

A quick drive from Pierce forward Jordan Fuller then led to a fast-break pass to freshman Devron Reynolds, who then passed it back across the front court for a three point goal by Fuller.

Glendale attempted to push plays, but turnovers hurt the Vaqueros in the end.

“Next play mentality,” Glendale freshman Juwan Thomas said. “Some guys just hang their heads after a bad play. You just have to have that mindset of getting to the next play.”

Thomas was injured with three minutes left in the game.

“He had a cramp. That’s his second forty minute game straight.” Glendale College head coach Vigen Jilizian said. “But he’s alright. He’s tough guy. He came back in.”
The Brahmas defense held on to maintain a five point lead. Till a steal from Moore led a two-on-one fast break pass to Williams to put the nail in the Vaqueros coffin.

The next game for the Brahmas will be at home against College of the Desert on Saturday, Nov 22 at 3 p.m.