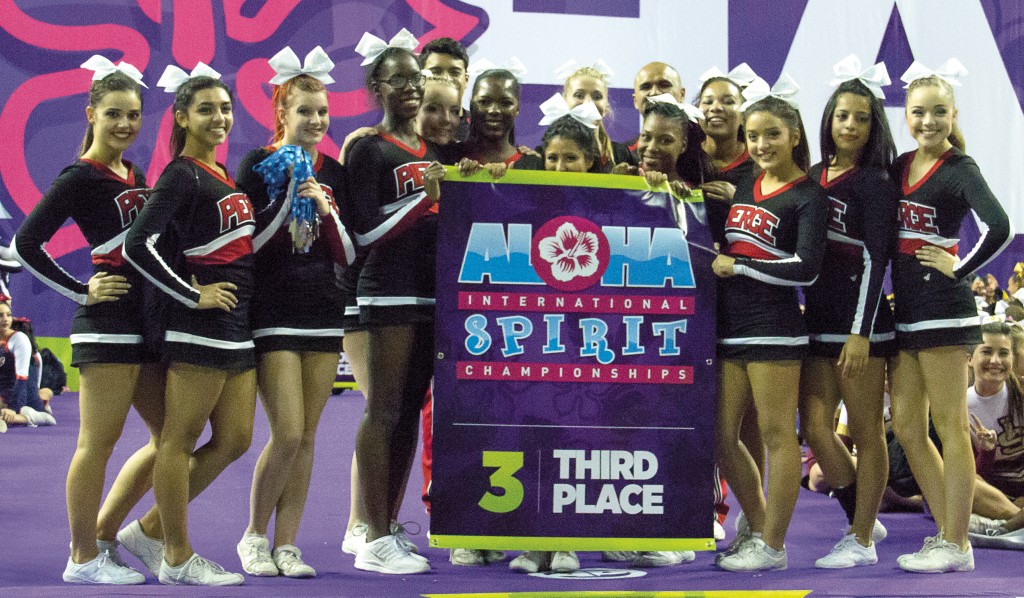 Pierce was one of three teams that competed in the advanced college divsion. Head coach Jenny Ghiglia knew that her squad had to go up against some tough competition.

“California Baptist University is known to be the best cheer team in California,” Ghiglia said.

“For what we did, I’m very proud that we were able to be a part of that on the same level as them.”

Freshman flyer Vivian Herrera is confident that the team will be able to turn things around at the next competition.

“It definitely was not our best performance, but I believe that the team is gonna learn from this experience, and we’ll be stronger in our next competition,” Herrera said.

“I was part of a basket toss that didn’t go up. My foot slipped and it was really sudden,” Herrera said. “It was the center basket, so it really got to me that I didn’t get to hit that basket.”

Although the team came in third, it was only 10 points away from second place.

“We were very close to USC in points, there was only a 10 point difference between us,” Ghiglia said. “We received an 11-point deduction for our falls, and that’s what made the difference.”

Sophomore base Andrea Henderson thinks the team needs to come together to offer each other encouragement after Saturday’s loss.

“Our flyers had a lot of mistakes at the last competition and I know they’re feeling a lot of pressure right now,” Henderson said. “We need to do some team bonding to boost the morale. We can go out there and win, but we just have to pull together and work really hard.”

A fall occurred during a pyramid stunt in addition to the failed basket toss.

“This was the first time I saw them drop these stunts, so as a coach I just say let it go, and move on,” Ghiglia said. “The ability was there, but their nerves got the best of them.”

The team faces difficulties by not being recognized by the athletic department. Athletic Director Bob Lofrano doesn’t believe that cheerleading is a sport.

“Cheerleading is not a sport, it’s an activity,” Lofrano said. “It goes along with sports because you always see cheerleaders at the games, but they’re not competing against anybody. A sport is competition.”

The lack of support from the athletic department and not being recognized as athletes motivated Ghiglia to form the competition cheer team.

“When he said that we were not athletes that made me feel like all he sees is us supporting them, and that’s what made me start the competition team,” Ghiglia said. “He needs to understand that there is a difference between a spirit team and a competition team, and if he ever went to an event he would see what cheerleaders do.”

Overall the team had a good experience and will work on its timing, focus, and execution. They will also do some conditioning to boost stamina.

Herrera has worked on her basket toss, which now has an increased level of difficulty. However, she isn’t feeling any pressure.

“They’ve increased the difficulty on that basket, and if we complete that, it would be the most advanced basket that Pierce has thrown,” Herrera said. “I tried it this Sunday and it went really well, so im looking forward to improving that.”

The next competition the team will prepare for is the Cali Finale in Bakersfield on April 18-19.