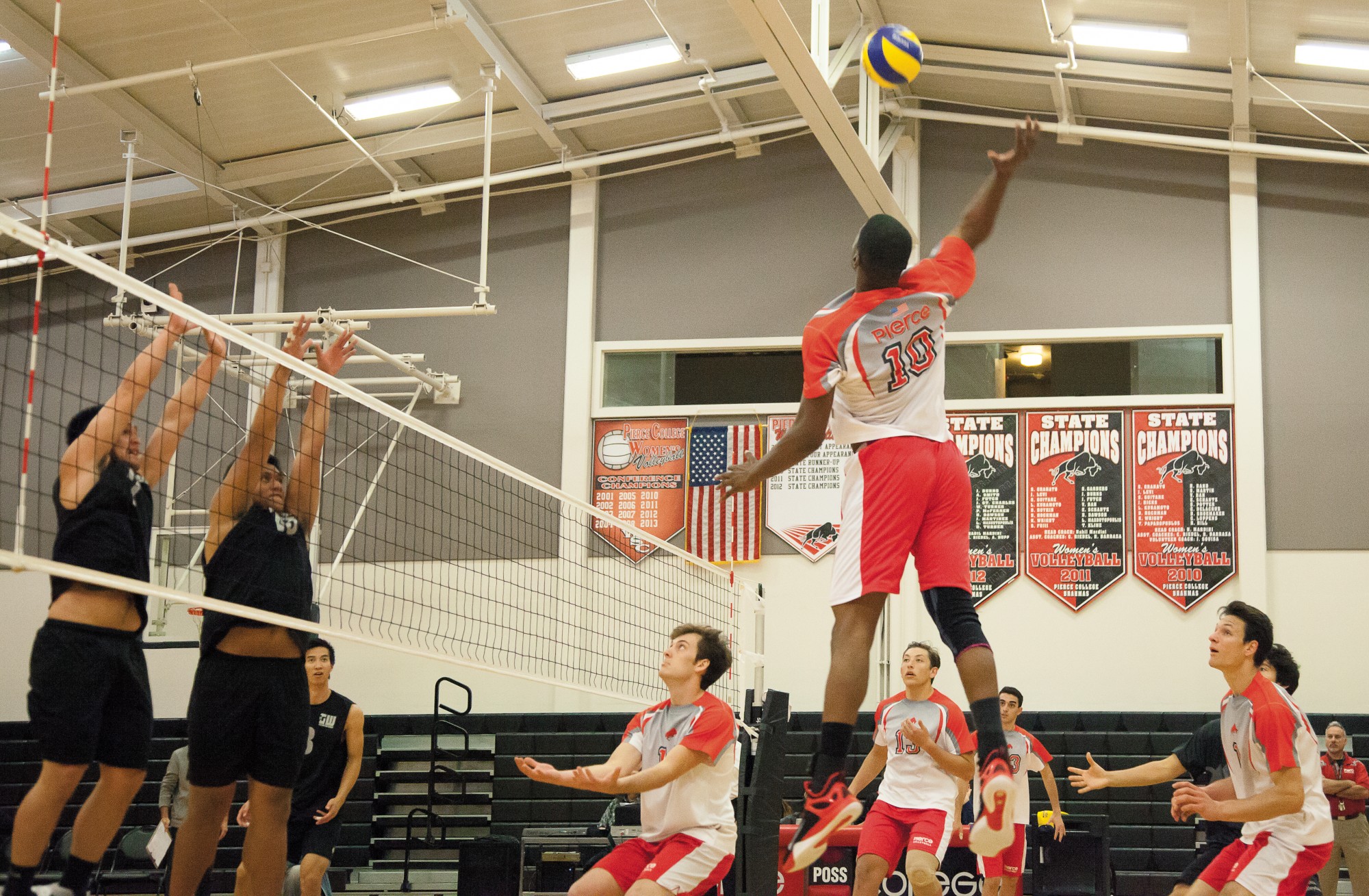 Pride, publicity, and pressure all play a role in being the host of the men’s volleyball state  championships. For the first time in the history of the Pierce College men’s volleyball team, home court may have a huge advantage.

Head coach Lance Walker was honored to receive the bid to host the tournament from the California Community College Athletic Association. Lance is prepared to take on the task of being the host school, but must wait for the approval of the administration.

“As far as the CCCAA, they voted and it’s been determined that we are going to host for the next two years,” Walker said. “As far as our administration here at Pierce, we’re still waiting on them to confirm that they’re okay with it.”

One of the reasons the administration might be hesitant to approve it is the potential financial setback the championships would pose.

“Sometimes when you have state championships, or when post season play comes to a school, people think that it’s more work, and wonder if this is going to be a financial burden,” Walker said. “We’re not looking to take this on to create more work for other people. We’re looking to show one of the great things that Pierce has, and that’s volleyball.”

“We’re 95 percent sure that it will be held here at Pierce,” Oliveira said. “We’re finalizing some things, but it’s pretty much guaranteed. We’ll host the semi-final matches, the finals, and then an all-star showcase.”

Walker is looking forward to the next two seasons and said he has already begun talking to potential players.

“We’re getting ready to do some heavy recruiting, but we’ve already got into the mix and started talking to some players,” Walker said. “I think the next two years are going to be a pretty awesome time for volleyball at Pierce.”

Walker is grateful to host the tournament but feels even more determined to win the championship in his home gym.

“I think a little more pressure is going to be added being the host team,” Walker said. “Our goal is to make the final four.”

Oliveira said the championship games will bring publicity to the college. People can go to the gym for the games or watch online, which makes it possible for anyone in the world to see them.

“It’s great for publicity,” Oliveira said. “We’ll be live streaming all of the matches, and it should bring in some college coaches, high school coaches, and high school programs into our gym to watch the final four.”

Pierce athletic director Bob Lofrano thinks that having the championship games at Pierce will be a great opportunity for the school and the community.

“It’s quite an honor, not only for the school, but for the community to have the men’s volleyball state championships here in 2016 and 2017,” Lofrano said. “Just think of all the young volleyball players that will want to come watch the best community college teams in the state vie for the championship at Pierce.”

As a former volleyball player who played for Pierce, Pepperdine, and also overseas, Walker knows what it feels like to play in championship games and win.

“My coach at Pepperdine would say it’s a significant and emotional event for a player to be involved in the finals,” Walker said. “You prep the entire year to get to the finals and hopefully compete at the highest level against the best team on the other side of the net.”

Walker said that for about the last 10 years, the finals have mostly been held in Irvine or Long Beach, which was a midpoint for teams coming from Santa Barbara and San Diego.

Walker, Oliveira, and Lofrano are ready to put in the time, effort, and hard work that it takes to host the tournament.

“Men’s volleyball is one of the oldest and most successful programs at Pierce,” Walker said. “We’re looking to bring a positive light to our historical program and build on the foundation that has been laid.”