Administrators should have office hours 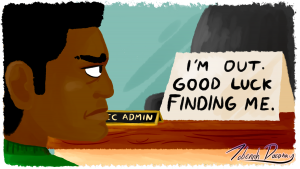 Community colleges are public institutions, funded by the taxpayers, and as such it is critical that students have open access to the people who run them.

Instructors and professors at community colleges are required to maintain regular office hours, and to clearly post those hours for their students. Administrators, such as the college president and vice presidents have no such requirement, which leaves the student body completely out of the loop when important decisions are made. That closed-door policy should be replaced with the same rules which apply to instructors.

If students are unclear about a teacher’s expectations, standards or plans for the semester, they know when and where they can find that instructor, and are guaranteed the opportunity to clear up any concerns. Pierce’s administrators hire and fire instructors, approve new classes and sections, sign off on important budget decisions and employee checks, and participate in union negotiations, and they make all of these decisions without ever meeting with students-at-large.

According to Chapter IX, Article VIII of the Los Angeles Community College Board of Trustees, “The president has the primary educational responsibility of insuring [sic] the opportunity of all members of the college community to attain their educational objectives.” The president can not possibly accurately gauge whether or not she is meeting this requirement if she does not meet with the students she represents.

One of the powers the president holds is the ability to approve, and cancel, construction projects. The LA Times revealed major flaws in that system in a massive 2011 exposé, which showed that among other disasters district-wide, projects to improve the Pierce farm proved catastrophic and amounted to $1.8-million of California bond money. Much of this occurred before the current administration took office, but it’s hard not to be worried that those same problems may arise again when the administration refuses to speak to concerned students.

According to transparentcalifornia.com, President Kathleen Burke’s total annual pay – including benefits – is $220,578. When Burke took office in 2010 she signed a three-year contract, with an initial base salary of $163,292. That figure was released in the middle of the Great Recession while teachers and classes were being cut district-wide.

Millions of dollars pass through the president’s and vice presidents’ hands every year, and the only way students can find out how that money is being spent is by possibly skipping class and personally attending budget committee meetings. The documents that state law requires the administration post promptly and publicly are hopelessly outdated. The budget committee meets monthly, but the most recent meeting for which the minutes are available is from July 2014. Kathy Oborn, president of the Academic Senate, said that is due to issues with the Sharepoint system the college uses, and that those issues will hopefully be addressed soon.

When asked about Vice President Rolf Schleicher’s availability, administrative assistant Linda Solar said Schleicher “can’t just drop everything he’s doing” when a student requests to speak with him. That is to be expected of the upper levels of administration. The campus has roughly 25,000 students, and asking the administrators to “drop everything” would be preposterous, and that is certainly not what this proposal seeks to change. The idea is that once a week, for one or two hours, each upper level admin would set aside time to open their doors and allow students to come and go with questions.

By doing so, they would not only make a show of good faith and transparency, but would encourage student involvement, and cause the students they represent to become more personally invested in their campus. Students who take pride in their campus are far more likely to succeed, and successful alums are in turn more likely to reciprocate that support, much the same way that four-year universities rely heavily on donations and support from their alumni.

The Roundup News
The Roundup is the student-run news outlet at Pierce College in Woodland Hills, Calif.
Previous articleDrought foreshadows dystopian future
Next articleLower the units for full-time status

Riding into the sunset

Player, coach and administrator. Jim Fenwick did almost everything in the sports world. And on Dec. 31, he’ll call it a day as he’s...
Read more
News

CARES fund is on the way

In an effort to bring financial relief, Los Angeles Pierce College launched the CARES Emergency fund for students who have been impacted by COVID-19. As...
Read more
MORE STORIES