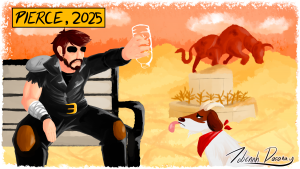 NASA estimated that California has less than a year’s worth of water left due to our current drought. Experts say that if we conserve water now, we may be able to prevent a total loss.

Pierce College needs to lead by example in our state’s effort to efficiently conserve what little water we have left.

In Southern California, we have almost no native water source. Our water comes from rain and underwater basin reserves. This water is not the best quality and leaves us importing our water from the Sacramento Delta, according to the Las Virgenes Municipal Water District.

Pipes burst at Pierce College often, and while not all of the bursts can be predicted, many can. The college needs to perform routine checks of our water pipes to make sure there aren’t any concerns. Catching the threat before it turns into a larger issue can help save water.

There are other ways we can help fight this drought, such as by replacing our fields’ grass with turf.

The NFL has already implemented turf fields in 22 of the 32 NFL stadiums, and many high schools and colleges have done the same. A study conducted by the FieldTurf shows that even though the initial cost of installing turf on a field is high, you will save about $47,500 a year.

That is just by replacing one field.

Turf fields do not need to be mowed, watered or fertilized. They only have to be raked every few weeks.

Not only is it cost efficient, but it helps California save water in a time where every gallon counts.

Additionally, Pierce College should install motion-censored faucets in all of the campus bathrooms that currently lack them. Many of the faucets get stuck and stay running until someone goes out of his or her way to fix the problem.

If Pierce College would post signs to inform students about the ways we can save water, it would go a long way. Things like telling students to ensure that the faucets stop running before they exit could help the current situation.

People may think this drought isn’t that serious, but if it continues, the government will implement strict water mandates. The State Water Resource Control Board says that the way things are going, the government might be forced to start rationing our household water usage to 150 gallons per day.

It is time for Pierce College to become a water-conscience campus in order to outlast the current drought. There is no time to waste.