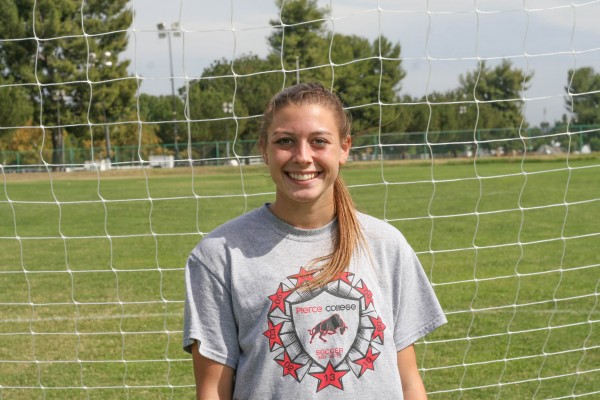 When playing a sports for the first time as a child, sometimes you ask yourself if you want to keep playing it or not. Maybe you want to try other sports or you don’t want to play any sports at all.

Freshman forward, Makayla Nichols defines herself as a passionate soccer player and now has become a phenomenon to the team.

The Verdugo Hills high school graduate debuted her first game as a Brahma with four goals. According to the California Community College Athletic Association, her overall ranking is 24th in goals and she is hoping to keep it stable or to be ranked higher.

Nichols started playing soccer when she was five years old and her mom signed her up for the American Youth Soccer Organization. At first Nichols didn’t have the vibe to play soccer.

“At first I didn’t like it, I would play but when I was taken out I told the coach that I didn’t want to go back in,” said Nichols.

After her first time playing, Nichols gave soccer a rest for year and decided to play it again and soccer started to become her favorite hobby.

Besides playing soccer she also likes playing softball, but soccer is the only sports she has passion for.

While playing for the American Youth Soccer Organization (AYSO) she has been experiencing different positions before becoming a forward. The other positions that she played were goalkeeper, defensive midfielder and center back. In which Nichols is more outstanding in center and defense.

“These two positions were my strengths personally. When I became forward I was very hesitant at first,” said Nichols.

One of her teammate, Angela Verduzco, the freshman midfielder, sees Nichols as an inspiration to the team.

“She is a cool person, and she is a team player. In her position as a forward she is not afraid to pass the ball if she needs to,” said Verduzco.

Another teammate who also sees Nichols as a great example to the team is Alexis Brown, the freshman goalkeeper.

“I like her, because she always has a great attitude, she doesn’t like to waste time, and she’s always ready to go score goals,” said Brown.

Nichols is keeping her vibe at a positive level and she is one day hoping to win a championship for not only herself but for her teammates.