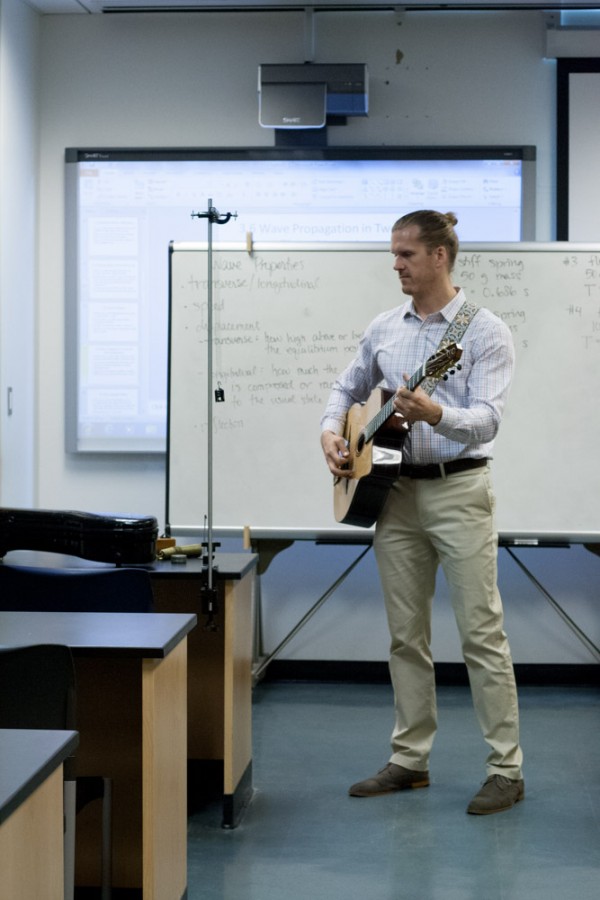 Class is about to begin, as the students take out their pencils, notepads, and calculators. The professor prepares to start his lecture, but before the class can begin, he picks up an important tool for science: his guitar.

Taught by Professor Raymond Bergstrom, Physics 15 is a class offered at Pierce College that teaches how principles of physics affect the production and quality of music.

Bergstrom stated that the class is unique in that it combines elements of both the music and science worlds together. According to Bergstrom, by the end of the course students should be able to understand every step of the process when creating music.

“As music is played by an instrument, the sound propagates through the air, it’s recorded on a microphone, encoded digitally in the computer, played back through an amplifier and a loudspeaker, and heard by ears of a listener,” Bergstrom said.

The curriculum covered in the course includes wave motion and simple harmonic motion. By taking this class students will learn about general properties of sound waves.

“This class is more of a science class than a music class. I try and do as much music stuff as I can,” Bergstrom said. “We get into how different instruments work. We spend a lot of time talking about all different kinds of instruments, strings, wind instruments, keyboard, percussion, speech and singing.”

Although Physics 15 is mostly a lecture course, Bergstrom said that they do have in-class labs that include different instruments. Bergstrom’s in-class labs include string, wind and keyboard instruments, however, he does not have a lab for percussion. Bergstrom emphasized that he would like to eventually include a percussion lab.

Though Bergstrom incorporates as much music as he can in this course, it’s still fundamentally focused on the aspects of physics.

Professor Dale Fields, the physics department chair, said, “If you are a physics student, you will recognize the rules of physics in this course.”

The Pierce College website describes Physics as “the study and mathematical description of the universe and everything in it.” Nearly all physics courses offered combine lecture, lab and group work into a semester of exploring and understanding the way our world works.

“If you want to learn about engineering or recording this is the backbone of all of that,” Bergstrom said.

According to Bergstrom, the topics that are studied in the class are used by most, if not all, music engineers, record labels and music studios to produce the best quality music.

Bergstrom states that there are similarities between Physics 15 and a few recording technology classes.

“In some of the recording technology classes, there is some overlap of this, but they don’t get into as much scientific detail as we do here,” Bergstrom said.

“This physics class is really important for understanding music production. It is important for music students to take a class like this to understand how and why music sounds a certain way,” former Physics 15 student, Lauren Sparks, said.

According to Bergstrom, this course is available at many colleges. In some colleges, music majors are required to take this course.

Specifically, at Pierce College, Physics 15 is not a required course. It is a General Education course, without any specific pre-requisites. However, Professor Bergstrom recommends that students that take this course know a little bit about music and are comfortable doing math.

“Right now, the course is not a requirement for anybody. I think it ought to be for music majors and physics majors if they are interested,” Bergstrom said.