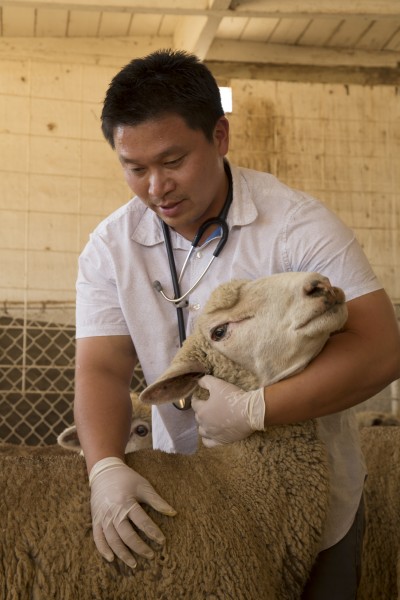 The Pierce College farm has been around since the gates of the school opened. And for the last 38 years, Leland Shapiro has kept that tradition alive as chair of the Agricultural Department.

Shapiro retired earlier this month, but the tradition is being kept alive by one of his former students.

Lu Dao, a University of California, Davis graduate, will be teaching several animal science classes that his mentor once taught.

“I have a lot of loyalty and love for Pierce,” Dao said. “I love teaching here. It’s amazing. It’s a dream come true.”

The new full-time professor said that his goal is to keep the agricultural department tradition alive. Dao will not try to change much, but said he would like to try a more hands-on approach with his students and animals.

“We have a stellar reputation,” said Dao. “I’m hoping students will do amazing things with the animals.”

Dao, who has been around Pierce his whole life, is already known by some of the faculty in the department from when he was a student at Pierce. Dao began at Pierce College as a pre-veterinary major with a love of animals. He has been around the Pierce farm since he was 8-years-old.

Instructor of veterinary technology Rebecca Yates, who had Dao as a student, said that he was one of the easiest recommendations she had ever written.

“He is an incredible addition to the campus.  I can’t speak more highly about an individual,” Yates said.

Dao’s motivation and influence to pursue a career in animal science comes from his former professor, Leland Shapiro. Dao said that Shapiro taught him everything he knows. He considers him a mentor as well as a friend. Shapiro said that he considers Dao to be “like an adopted son.”

Dao met Shapiro when he was 8-years-old, and told his mother that he “wanted to grow up and be like him.” Twenty-years later he became a student of Shapiro’s and is now replacing his former instructor for the classes he once took.

“He encouraged me when I was down,” said Dao. “Hopefully I can fill [Shapiro’s] shoes.”

Shapiro said that while Dao was attending UC Davis 385 miles away, he drove back to the San Fernando Valley to visit him when he was hospitalized, despite having class in seven hours.

“When I woke up his face was right there, and I said ‘What are you doing here? Aren’t you in medical school?’ and he said ‘I am but I just had to see if you were ok.’  That’s the kind of man he is,” Shapiro said.

Shapiro said that his advice to Dao is to have patience and be compassionate with his students.