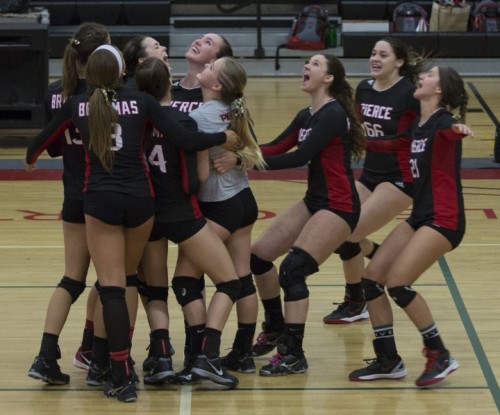 The Pierce College Volleyball team won three straight sets against the Cuesta College Cougars with an ace to win the game.

Cuesta came hungry in the first set. Scoring first and gaining a substantial lead, the Cougars  were ahead 9-4. The Brahmas quickly caught up making the score 11-11 before establishing dominance.

“Well it was kind of sporadic for us. We killed it in the first set, mulled in the second and decided we better pick it up. That was nice to see, but we needed a lot more than that,” Head coach for Cuesta Roche Nystrom said.

The score was 24-16 when Outside Hitter, Zaire Dartis, landed a corner shot to win the first set.

Continuing with the momentum from the first set Pierce employed powerful spikes and several aces to get the scoreboard to read 17-6.

“We show a lot of heart at times but with inconsistency, and we just don’t have the firepower that [Pierce] has,” Nystrom said.

A failed spike attempt by Cuesta handed the second set to Pierce with the score being 25-9.

A determined atmosphere brewed on the court as the third and final set began. The Brahmas turned up the heat by scoring three quick points for a 3-0 lead.

“I think we should have started the way we ended. It was really strong and consistent and confident. I think our team is going through a little bit of a funk right now,” said Chelsea Lawrence, Middle Blocker and Opposite.

The Cougars fought to stay alive. The score was 17-17 and with the end of the third set approaching, Cuesta somehow managed to pull a bit of a lead with 23-20.

Pierce won the third set, and subsequently the match with an ace courtesy of Montana Sheppard, Outside Hitter.

“We almost gave it to them with our errors. They weren’t doing anything special to be honest. They were about to beat the Brahmas, but we fixed it,” Volpis said.