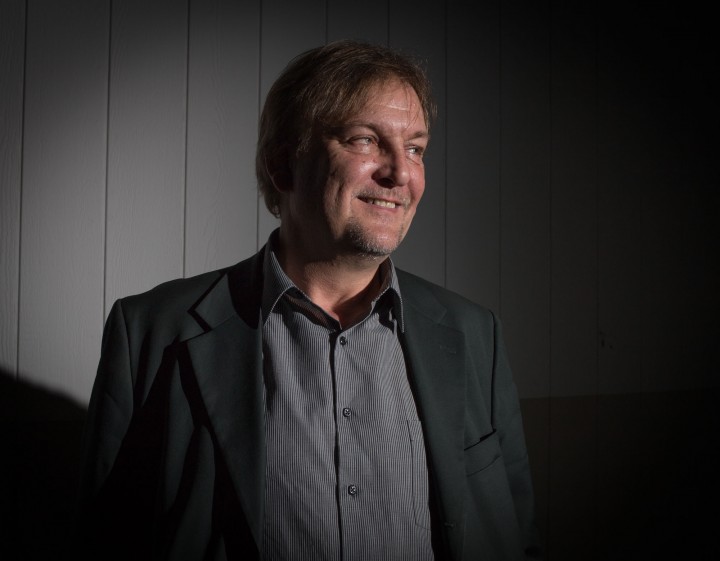 By the time adjunct media arts professor Daniel Nyiri was 26, he had already written and directed a short film starring Helena Bonham Carter.

As the son of a playwright and grandson of a screenwriter, it appears that film industry is in his blood.

“It’s difficult to say what was nature and what was nurture,” Nyiri said.

Nyiri grew up in Europe in the 60s and 70s and was constantly moving from city to city. His parents ran a small theater company and his dad would go on tour and often took his family with him.

“It was like growing up in the circus,” Nyiri said. “My sister and I were surrounded by an extended family of crazy, creative people. We didn’t really understand [the concept of] people who spoke only one language at home.”

Nyiri has worked all across Europe in the film and entertainment industry.

“I was lucky to be a competent linguist, which gave me the freedom to work in the entertainment industry in England, France, Hungary, Austria, Spain and the Middle East,” Nyiri said.

Nyiri attended the University of Bristol and obtained his bachelor’s degree in the Classics with honours in Latin and Greek, Language, Literature and Philosophy, in 1984. He attended the London Film School where he obtained a “Postgraduate Diploma in the Art and Technique of Filmmaking,” considered to be the equivalent of an American MA or an MFA, in 1988.

Nyiri made many short films between 1984 and 1988, he said.  In 1988, when Nyiri was 26, he wrote and directed a short film titled 6 minutes with Ludwig starring Helena Bonham Carter.

“She was already destined to be a star, long before I met her,” Nyiri said. “Aside from her striking beauty and immense talent, she has always been one of the brightest, hardest working, and kindest people I’ve ever known.”

This film, and others of his, toured student as well as professional film festivals such as the Budapest Film Festival and the BFI London Film Festival. Many of his films were nominated for awards but didn’t win any, he said. Despite this, Nyiri’s work didn’t go unrecognized.

“It all happened very quickly and I eventually found myself working with the best advertising, creative and film crews in the world,” Nyiri said.

He landed his first industry job in Europe in 1983 working alongside George Clooney and Charlie Sheen on a never-released American production.

His first professional directing job was a documentary for Cyclops Vision. His first directing jobs after attending the London Film School included a series of television commercials for Max Factor fragrances in 1989.

Nyiri founded the LA MEDiA Regional Career Technical Education Program in 2005. The program supports curriculum articulations as well as professional training for digital media including events like the annual “Meet The Pros”, sponsored by the Academy of Television Arts and Sciences Foundation. He also served as the statewide director of the California Media Arts Career Technical Education Program from 2009 to 2014.

Nyiri has been an adjunct professor for the Los Angeles Community College District for 12 years.

Pierce College Media Arts instructor Kenneth Windrum has only met Nyiri once at a department meeting this semester, but said that he instantly liked him.

“I immediately liked him because he’s obviously very bright and a real lover of cinema like I am,” Windrum said. “We had a great time talking.”

According to Laurie Nalepa, Dean of Career Technical Education at Los Angeles Valley College, Nyiri spent many years working as a full time grant writer and program director based at Valley College, reporting directly to her.

“[Nyiri] was a great addition to Valley College, and he has made lots of contributions to the media arts department,” Nalepa said.

This semester he is teaching Multimedia 210 at Pierce, a CSU approved class about digital media editing techniques and software. In this class, students learn the principles and applications of editing video and audio, which includes creating special effects in Adobe Premier Pro.

“Once they have mastered the fundamental principles of editing digital media and learned to apply the software, they are also ready to continue training as post production professionals in the industry,” Nyiri said.

In addition to teaching, Nyiri runs a privately owned company, Nyiri and Associates, that exists primarily as a rights-holder for certain literary and motion picture properties that have been developed and produced for theatrical and television distribution.

“The main function of all art is to communicate in a meaningful and lasting way,” Nyiri said. “Know your audience, focus on what matters most in your story. Learn from everything and everyone, but work as hard as you can to find your own true voice.”