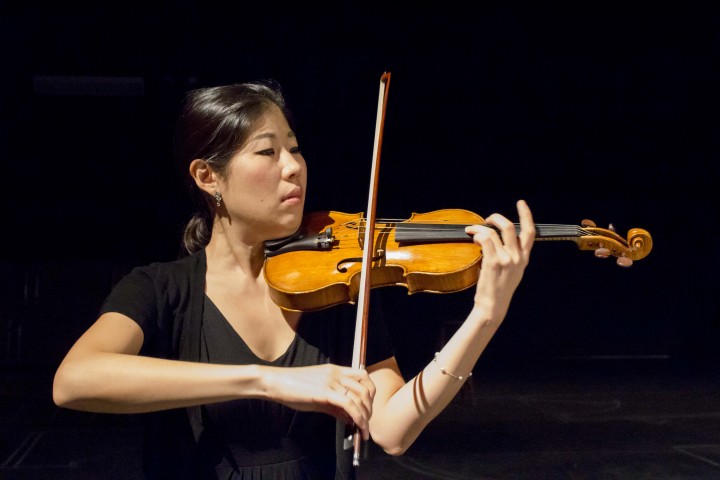 Music lovers from any genre can enjoy listening to classical music from time to time, particularly if it’s French-themed classical music. With Ji Young An on violin and James Lent on piano, the dynamic duo made the performance of eclectic works entertaining and unforgettable.

The first piece involved slow and fast movement. Violin Sonata No.1 A Major, Op.13, by Gabriel Faure had four movements. Most French music pushes the boundaries, and this movement made it that much more unique.

“I was excited, I was having fun. I was trying to be in tune with the pianist, it’s not just me playing I had to really connect with the pianist,” Young An said. “It’s more about excitement, the nervousness get replaced with excitement.”

The second piece was Meditation by Jules Massenet, and that was an interesting piece. The music was very fast paced but eventually slowed down. The pianist was remarkably sensitive and flexible.

“He’s a professional pianist. He plays all over the place, he teaches at UCLA. He’s a very established professional and performer,” Young An said about Lent, the pianist that performed with her at the concert.

A concert highlight was “Claire De Lune,” from Suite Bergamasque, by Claude Debussy. The piece’s dramatic and expressive contrast to the movement is unique and alluring.

“I thought it was good,” said James Bergman, a music professor at Pierce College, who added that Young An plays consistently well. “She’s got beautiful tone, she’s very expressive, and the students always love that,” Bergman said. “I always try get her to play French music because it has a pretty and relaxing sound.”

As they finished the fourth  piece of the movement with Jardins Sous La Pluie, by Claude Dubussy, Young An and Lent thaned the audience for coming.

Gwendolyn Billings, said she enjoyed the performance and said that she helped design the flyers for the event.

“It was really unique. That’s what I like about music in this era. It was defiantly something different and they were trying to break free from what was being played at that time. This piece was one of the reasons why I really liked that composer,” Billings said. “Personally I can kind of connect to this music because I like it a lot.”

The music was dramatic but also calming. Young An’s facial expression and body movement made it emotional but delightful to listen as well as James Lents phenomenal performance, they both were really an astonishing pair.

The next concert in the series is November 5.