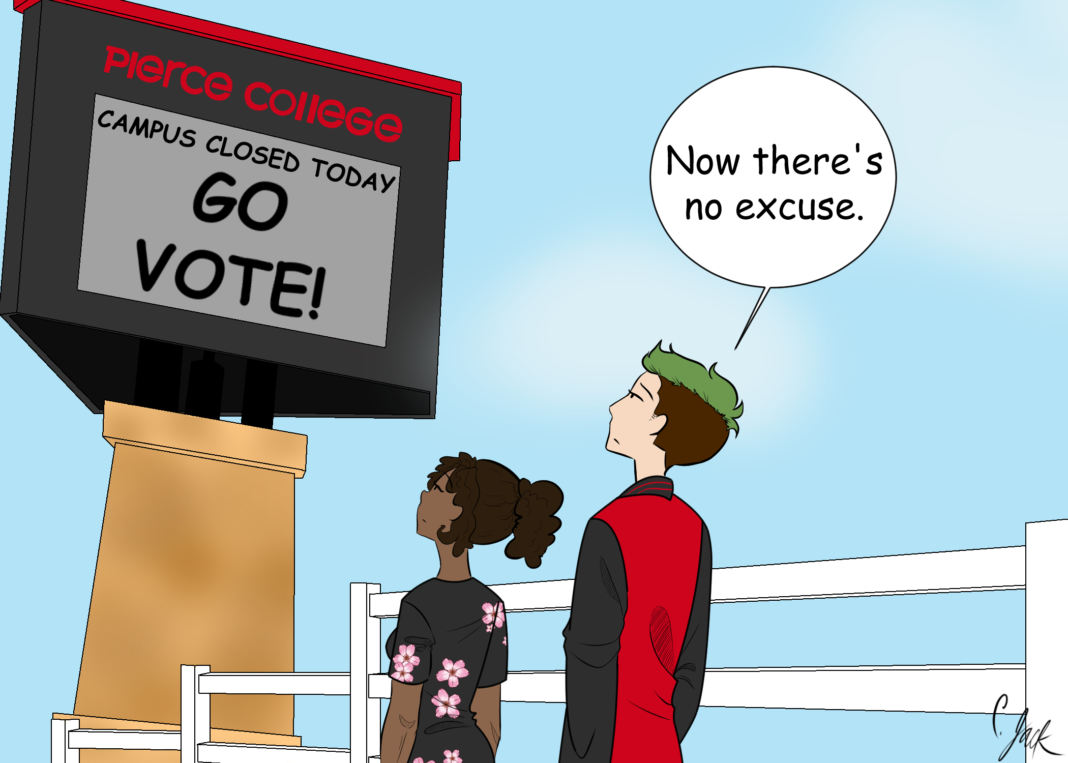 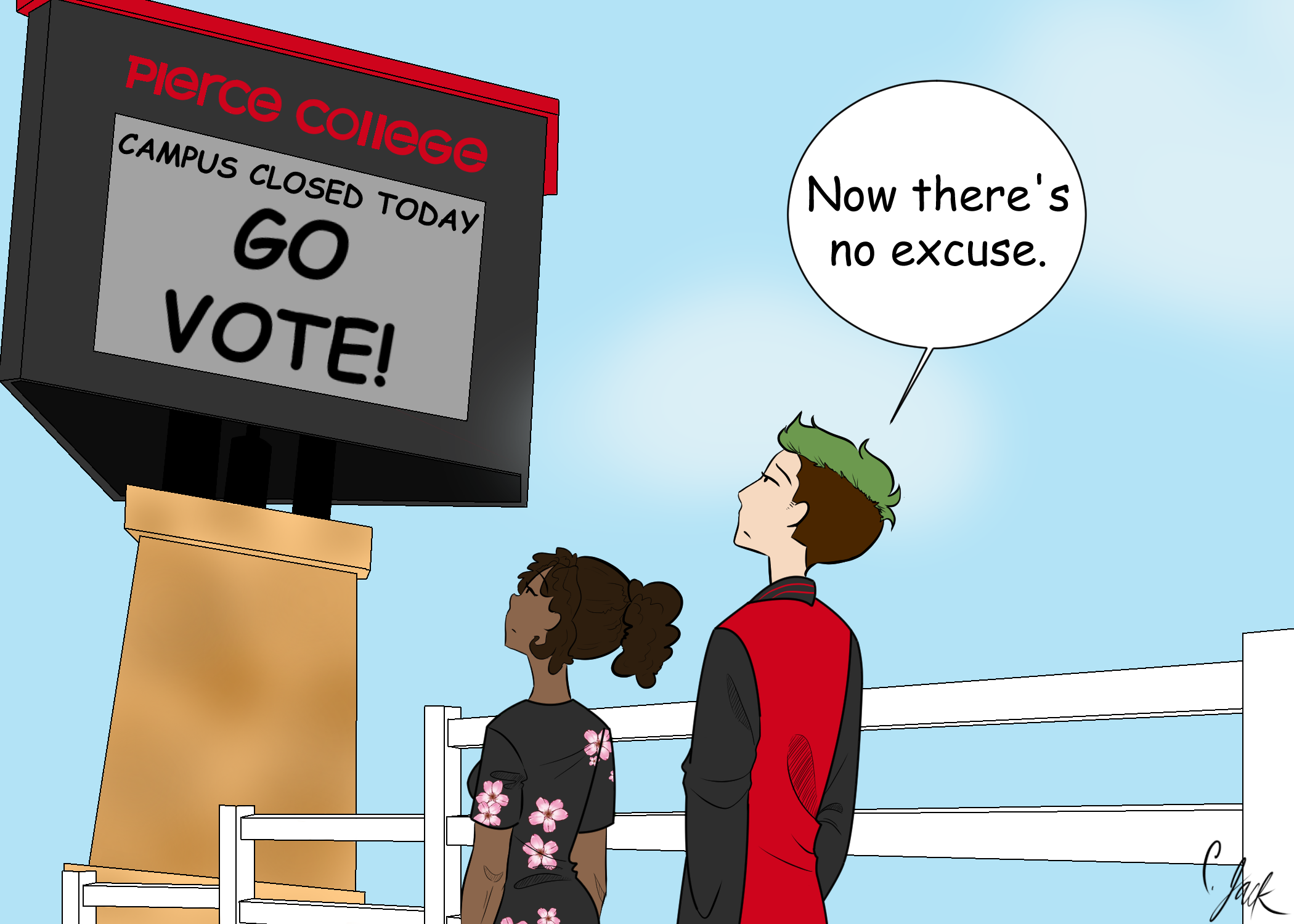 Because of the results of the 2016 presidential election, California, a traditionally liberal and democratic-voting state, now has to play defense against the federal government. California will be to Trump what Texas was to Obama. As such, California politicians are especially stressing the importance of voting, admonishing and warning the public that they can prevent events like these if they become involved.

A Silicon Valley lawmaker is proposing Bill 674 that would make every November election a state holiday. This bill would make it so that people in the workforce have the day off to vote. According to Evan Low, author of the bill, it would especially encourage low-income individuals, who can’t afford to miss work.

Additionally, a state holiday would mean schools and universities would not be in session on Election Day, allowing the ever-elusive young adult voter an opportunity to cast their ballot.

The most common class sets at Pierce College are Monday/Wednesday classes and Tuesday/Thursday classes. Tuesdays are particularly busy class days. Students who are at school all day on a Tuesday don’t have the time to vote. If a student misses a Tuesday class, they might miss turning in assignments or knowing what the assignments of the week are.

President Donald J. Trump has proven time and again that people can be inspired to engage in politics and society.

The women’s march in January was the largest protest in U.S. history. Reports estimate that between 3.2 to 4.2 million people, or one out of every 100 Americans, marched in major cities across the country.

Trump definitely has a knack for uniting the masses.

If there’s but one silver lining to this predicament, it’s that it has sparked a newfound interest in politics and civil engagement. No other issue since the Vietnam War, which drew 500,000 to 600,000 protestors to the streets, has united enraged youth as much.

The stereotype of the apathetic millennial slightly diminishes in the wake of physical manifestations alongside whining internet slacktivism.

Because Election Day is not a state holiday, voters cite work as a an excuse to not perform their civil duties. California has strived to remedy this situation by passing laws that would allow an employee to take paid time off to vote. This law makes it so that an employee can be payed for up to two hours. However, this law isn’t very well-known.

Although young people are more aware and vocal about politics, it’s the old people who are actually voting and eliciting change in government.

According to the California Civic Engagement Project, 33.4 percent of young adults registered to vote actually cast a ballot. Voter turnout gaps between youth and registered voters overall decreased from 20 percent to 13 percent in 2016, signifying that perhaps the abundant amount of media, money and attention directed at millenials was worth the effort.

However, CNN reports, voter turnout for the 2016 election overall was at a 20-year low. Of all the voting-age citizens, only about 55 percent voted. FiveThirtyEight reports that the voter turnout rate was 58.6 percent in 2012, showing a consistent decline through the years.

Civic duty is a chore. Every election, candidates take on the daunting task of trying to engage underrepresented and uninterested voting groups. Ethnic minorities and young adults make up a sleeping majority, especially in California, that lawmakers want to target.

Former President Barack Obama and 2016 presidential candidate Bernie Sanders are credited with motivating youth and minority voters, but these are only rare spikes in decades worth of disinterest.

Voting is a drag. Googling the location of the nearest polling place, getting there and waiting in line is more effort than many want to give. And policymakers know the plight of lazy individuals, and those who actually cannot make time, which is why they have tried to make it more convenient by sending out mail-in ballots, though it would seem that this is still far too inconvenient for some people.

By making Election Day a state holiday, citizens won’t have an excuse to not contribute to the policy of their government due unavailability.

The Roundup News
The Roundup is the student-run news outlet at Pierce College in Woodland Hills, Calif.
Previous articleGoing for gold in the 100-meter fly
Next articleOur cyber insecurities

First time voters can get overwhelmed by propositions on the ballot, but the Bipartisan Policy Center is working on educating students about them for...
Read more
Featured Stories

People often think of librarians as quiet people with their heads buried in books, but there’s one librarian who’s as savvy in the social...
Read more
News

Surrounding fires have filled the skies with smoke and have caused unhealthy air conditions for large parts of Los Angeles County, including Woodland Hills. The...
Read more
- Advertisement -

Marching to the polls

With polling centers open at Pierce College, eligible members were able exercise their voting rights from Feb. 29 to March 3. A booth was set...
Read more
Opinion

Voting is the key to the United States’ political system. The United States is ranked 31 out of 35 in developed countries in voter turnout,...
Read more
News

Rolling with the First Amendment

"I love Trump". "I do not support DACA". "Defeat the hate." These were some of the messages students wrote on the Free Speech Ball the...
Read more
MORE STORIES