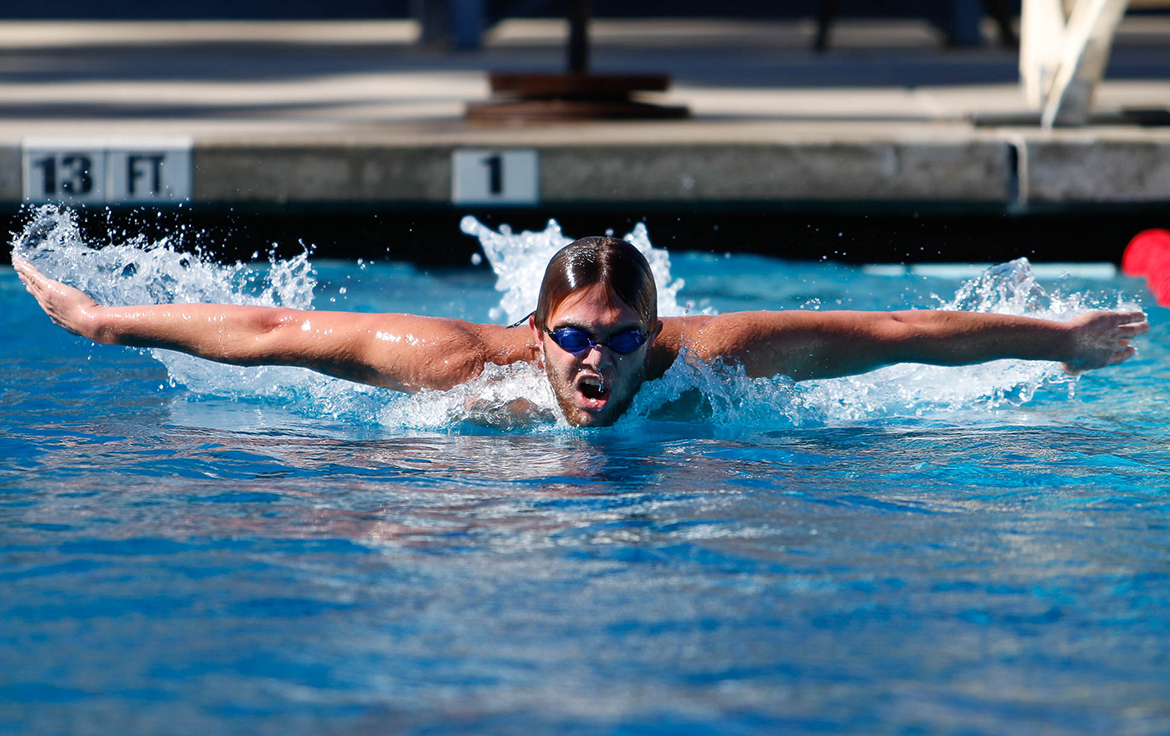 It was either sink or swim for freshman Thaddaeus “Shaggy” Adams when he was first thrown into the pool as an infant. While most babies are learning how to take their first steps, Adams was learning how to stay afloat.

Adams,18, said that swimming has been a part of his life since he was a baby, but only got into it recently as a sport.

“Basically, my dad threw me in when I was eight months old and told me, ‘You’re going to swim,’” Adams said. “I’ve been swimming ever since. I didn’t really get into competitive swimming until ninth grade.”

Adams says he got the nickname “Shaggy” from his friends and teammates at Granada Hills Charter High School because he resembles the cartoon character from Scooby-Doo. The name has followed him ever since.

“When I had longer hair and my full-on beard, I really looked like him,” Adams said. “I have none of Shaggy’s other attributes, except that I do eat a lot.”

When Adams first came to Pierce, the difference between his new team and his old high school team was obvious.

“It’s a lot smaller than my high school,” Adams said. “We had like 70–100 people to go to practice. We had to take two buses. The coaches here have a lot more time to focus in on everybody because it’s such a small team.”

Adams’ favorite strokes are the butterfly and the freestyle, but he really struggles with the backstroke because, “well, it’s hard for everyone.”

“I like the freestyle because it is the most competitive out of all of the strokes,” Adams said. “That’s the true test of health, how much you’ve trained and how well you know your structure, your stroke, your everything.”

Adams knows exactly what he’s training for. He hopes to become a professional swimmer, with the ultimate goal of being an Olympian.

“I want to go because I like watching the real Olympics and seeing the opening ceremony and how everybody’s like a family there,” Adams said. “I want that experience of being there during the opening and closing as an Olympian. I’d like to travel the world too.”

Swim coach Mircea Pitariu is confident about Adams’s future in the pool, but does recognize where he must improve.

“He performs well,” Pitariu said. “He’s a great swimmer for the guys’ side because he is very versatile. He definitely has the potential to make it to state. He just has to work on his full speed on-switch.”

Adams says that he appreciates training alongside all of his teammates, especially freshman Juo Sato.

“Sato is one of the fastest swimmers in the pool,” Adams said. “I try to keep up with him.”

Sato, 19, recently moved back to the U.S. after living in Japan for 13 years. He described Adams as a kind, outgoing person and a good teammate. Sato said he has found it difficult making friends in this new culture.

“Since moving back, I’ve had hard times getting to know people,” Sato said. “Shaggy wanted to be my friend. He introduced me to people and even my teammates. He makes it comfortable to be me all of the time.”

Despite describing himself as competitive, Adams keeps that same good natured and humble approach when it comes to his opponents.