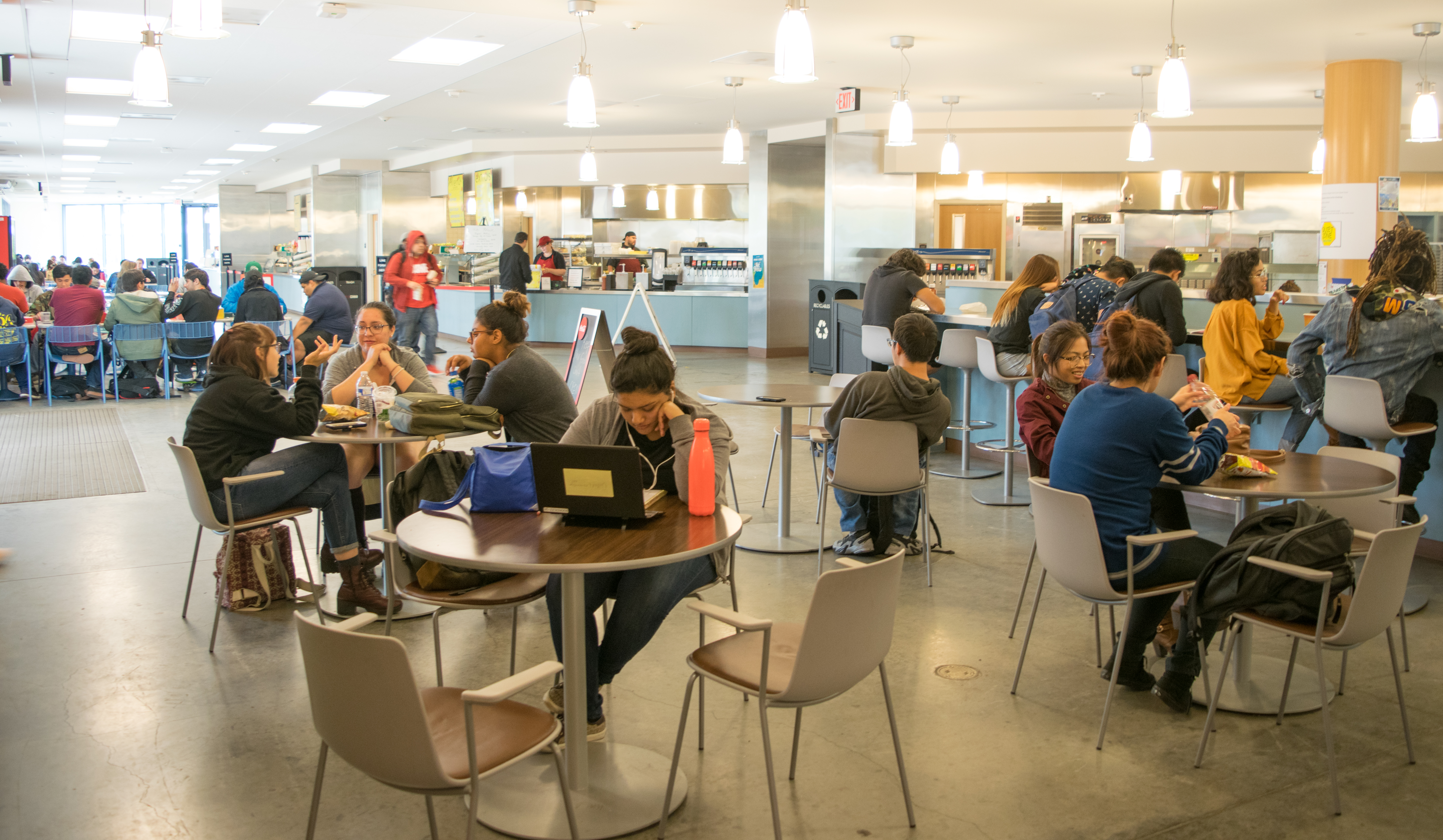 Less than a year after filling the void left in the vacant Pierce College Food Court, Falafelicious Catering’s contract is being terminated as the district plans to approve a new food vendor.

The Los Angeles Community College District (LACCD) approved two outside vendors, seeking to satisfy the need for food on campuses and to replace the businesses currently serving the schools.

Falafelicious Catering made a bid, but did not make it past the interview phase.

Pacific Dining of San Jose and High Rise Goodies Restaurant Group are the two leading vendors that have been approved for phase two of the deciding process. The Board of Trustees plans to send out a Notice of Intent to Award at Board by May 10.

LACCD anticipates that the approved vendors will be ready to open the cafes and cafeterias at their respective colleges by fall 2017.

To qualify, a potential district vendor must be able to provide food court / cafe services, mobile food operations and vending services. A vendor must make a bid for each college it’s interested in servicing within the LACCD district.

“The overarching goal of the district is to provide a consistent quality level of food service for all of our 225,000 students at all nine campuses,” Robert B. Miller, LACCD vice chancellor for finance and resource development told the Daily News in a story that ran on May 5. “We believe that this will do that.”

The Pierce College Food Court had been vacant several semesters before it signed a lease with Falafelicious Catering owner Ofir Bass in September 2016. The Falafelicious food truck began operations at Pierce in 2014, and according to Bass, they fought for years to take over the unoccupied cafeteria.

“I think it’s unfortunate, because the cafeteria was closed for so long,” Bass said. “They were trying to find an imaginary district-wide vendor to take over the entire district, and it didn’t happen for years. Pierce College then took initiative and signed the lease with me.”

Falafelicious is under a five-year lease that is annually reviewed and is subject to termination at the discretion of Pierce College.

According to Bass, it is unlikely that Pierce will be able to honor the contract for the full five years. Additionally, it is uncertain whether Falafelicious will be able to continue its operations on campus during the year that it will take a vendor to situate itself at Pierce.

“We are very concerned for the future of the Food Court,” Bass said. “They are obviously not going to be ready to open the cafeteria in time. It’s probably going to be a period of time that the cafeteria will be empty, and it took three years for us to open the doors, and we really don’t want to see it close again.”

Pierce invested about $5 million to construct a cafeteria that has so far been more vacant than in operation. The Lovebirds Cafe occupied the Food Court until December 2014, when its lease expired without renewal. And until Bass took over, the cafeteria remained empty as Pierce sought food vendor bids independently of the district.

Because Los Angeles Trade-Technical College, Los Angeles Harbor College and Los Angeles Mission College have culinary programs that provide cafeteria services to its community as a part of curriculum, they are exempt from the process. A vendor at these colleges would only need to provide mobile and vending food operations.

These exceptions have Bass and other members of the Pierce community questioning why it can’t be an autonomous decision to choose what vendors provide food services on a campus that has provided itself with the proper facilities and that has independently contracted food vendors to compensate for the district’s delay.

According to Vice President of Administrative Services Rolf Schleicher, about two years ago, four LACCD colleges were solicited to obtain a provider to handle their food services, but the process fell through.

“We were left to our own devices to figure out the contract we wanted,” Schleicher said. “We had a good benchmark for what we were looking for. We went out to do a competitive bid, and we had some strong suiters, and Falafelicious was the entity that won the bidding process.”

Falafelicious met the criteria of high quality food, low cost and the consistency to be available multiple hours to the students, according to Schleicher.

“They performed extremely well under the contract. I think they’ve met all the terms we were seeking,” Schleicher said. “They provide a good revenue stream to the college, which helps fund some of our operations. They’ve been a really collaborative, proactive vendor for us, so we really like the service they provide.”

“We don’t feel that a big cooperation will be able to respond to such requests as fast and efficient as a small business would,” Bass said. “We don’t want to run the whole district, we just want to stay at Pierce and continue to do what we’ve been doing.”

Dean of Student Engagement Juan Carlos Astorga said the cafeteria provides an opportunity to increase the interactions and engagements between students, faculty and staff.

“Of the number of faculty and students that are on campus, can we create a clientele that will consistently continue to come and purchase? That is something that I think he has accomplished really well,” Astorga said. “When you go in there, there’s at least 80 to 100 people at any time.”

Astorga said he really appreciates that Bass is approachable and on campus every day. If he needs catering services for an event or program, Bass can easily be reached, he said.

“I really appreciate that I’m on a first-name basis with Ofir,” Astorga said. “One benefit of Ofir Bass’ business being here is that he is willing to go the extra mile to assist our students. If some clubs need catering, I’ve seen him lower his prices to match the club’s budget.”

Astorga said he does not know whether a new vendor would be as accommodating or as receptive as Bass has been to Pierce. And though he’s unsure about why Falafelicious failed to be approved as Pierce’s food provider, Astorga speculates that Falafelicious’ small-scale business model made it less competitive in comparison to larger businesses.

“The district made a decision to have one company that could provide for all nine colleges,” Astorga said. “When you’re a smaller business entity, it’s a big thing to take a bite out of, and I’m not so sure that Falafelicious was prepared to scale up to that level that quickly.”

According to Food Court general manager Salvador Castaneta, Falafelicious Catering had two restaurants, one in Northridge and one in Encino. When they opened the cafeteria, he said, they were busier and more profitable at Pierce, so Bass decided to sell the restaurants.

“We wanted to make sure that we gave 110 percent to the Pierce College Food Court and food truck,” Bass said. “It’s a very busy environment, and we needed all hands-on deck, so we made an executive decision to not renew our contract at the restaurant. We brought all of our employees, all of our equipment, all of our recipes, our expertise, our chefs, our menu items, everything that we were doing there, over to Pierce College.“

According to Bass, Los Angeles Trade-Technical College successfully petitioned to keep its food truck on campus. Hoping for similar results, Falafelicious created a petition on change.org that has so far accumulated nearly 500 signatures. The catering company will send the petition and letter to the Board of Trustees and appeal during the meeting on May 10, seeking to at least maintain its mobile food services on campus.

“We need the support of the students because they have a lot of impact on what kind of food they want here,” Bass said. “There’s about 22,000 students here that deserve to be heard and they need to speak up and be involved and choose what food vendors they want to have.”

Bass said the district only wants to bring in large corporations that would take over for the small businesses that bring in direct revenue to the colleges, making it so that all profit goes through the district.

“We don’t want to see this place shut down due to big corporations coming and taking over. I’m sure the prices are going to go up and the quality will go down,” Bass said. “There is no other reason except for money for them to get rid of us. It’s not that we don’t serve quality, fresh, healthy, affordable and tasty food.”

Schleicher, however, said he doesn’t think that the district is trying to limit smaller entities from participating in the contracts.

According to Schleicher, the district is trying to fix the issues it has with its food services by providing vendors that are able to accommodate several colleges and achieve multiple food operations.

Furthermore, many colleges don’t have the facilities to provide food services, he said. The district is trying to counterbalance that by contracting a vendor to service those six colleges that are lacking.

But Schleicher said that Pierce has managed to provide food services independent of district interference.

“The college owns its own destiny. We are fiscally prudent. We try to manage effectively, and we need to make sure that we get vendors in here that can meet our needs,” Schleicher said. “Normally, the district is a recommending body to us. All we are looking for is the ability to choose the vendors that are right for us and not be restricted by a selection committee that may have a view that only one or two providers can provide services to us.”