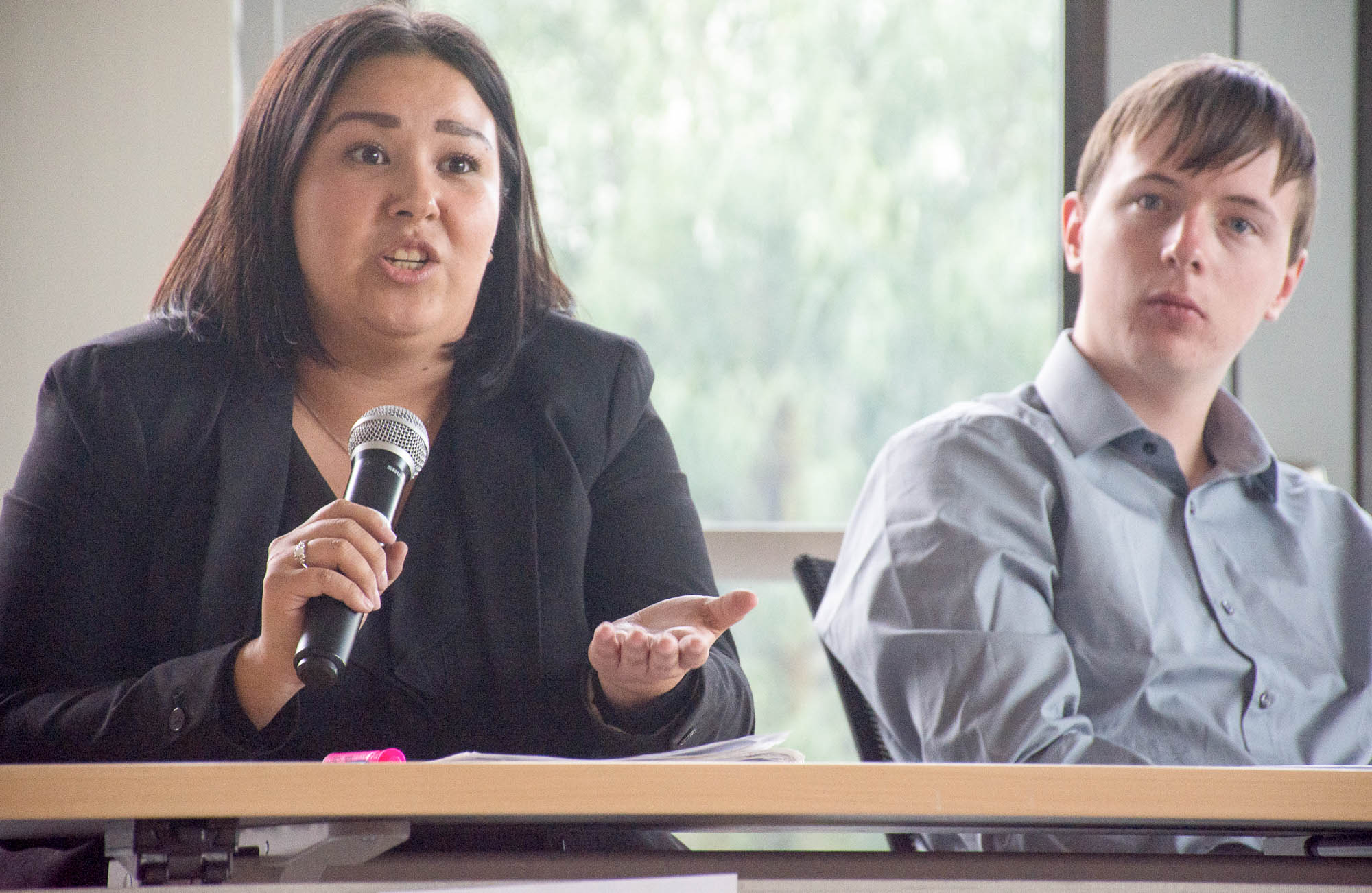 Unlike the kicking and screaming type of arguments between close friends or family members, international debaters showcased their argumentative abilities.

“I think showing the students the world of debate is made more tangible when they see fellow students and colleagues going up against seasoned debaters,” Robert Loy, an assistant professor of communication studies, said. “This is about inspiring and promoting diversity, as well as critical thinking.”

The British team visited Pierce for its fifth stop on a 52-day tour of American colleges, organized by the NCA’s Committee for International Discussion and Debate (CIDD) and the English-Speaking Union (ESU). The team was invited to Pierce to expose students to the practice of debate.

“It’s to show the process of collaborating and talking with each other to form coherent arguments,” Loy said.

Richard Hunter, one of the debaters from the British team, said that the tour has been a staple of the ESU since 1922 and is intended to showcase the skills of international debating and to inspire faculty to impart those skills to students.

“We’re focused on outreach, bringing debate to different educational institutions, and empowering teachers and staff to be able to teach debate,” Hunter said. “It’s just a good way to bring the skills that have been drilled into us to a completely different environment and share them.”

Hunter and Rebecca Howarth of the British team collaborated with PCCA members Jacqueline Lopez and Hector Zuniga to form arguments for and against the debate’s topic, “This house would allow the use of performance enhancing drugs in sports.”

Howarth and Zuniga took an affirmative stance, arguing that performance enhancing drugs should be allowed in professional sports, and Hunter and Lopez argued in opposition.

According to Hunter and Howarth, the topic was chosen to address the prominence of performance enhancing drugs in modern sports and for its novelty.

“There’s been a lot in the news about athletes who’ve had great achievements, only for it to come out that they’ve used performance enhancing drugs, but I also think that it’s a fun debate topic,” Howarth said. “There are a number of classic debate topics that you do quite a lot, like, ‘This house would implement the death penalty’. But this is something a little bit different.”

The two teams had a wide variety of topics to choose from, but Loy agreed that this would be a particularly interesting one, Hunter said.

Zuniga began the debate by arguing the affirmative position’s point that regulations against performance enhancing drugs in professional sports cause athletes to seek alternative “designer steroids,” which are harder to detect, but riskier to use. He further argued that allowing and regulating the use of these drugs and emphasizing proper usage and dosage would benefit the health of athletes who take them.

Zuniga’s points were then cross-examined by Lopez of the opposing stance, who questioned the veracity of the health benefits said to be offered by performance enhancing drugs and pointed out a link between their use and the development of cancer.

Hunter argued for the negative position first, presenting his and Lopez’s contention that performance enhancing drugs given to athletes who have suffered injuries, aid them before they have had the chance to fully recuperate, causing long-term damage to their bodies.

After the two sides reiterated and summarized their arguments and answered questions posed by attendants, the audience voted Hunter and Lopez of the negative stance as victors of the debate.

Following the debate, Howarth expressed appreciation for the opportunity to debate with a Pierce College student and for the new experience that it offered.

“If you debate with one person a lot, you know how they think and you get into this comfort zone. You go into autopilot,” Howarth said. “It was really great debating with somebody who had a completely different perspective. Hector’s strengths were my weaknesses and vice-versa, so I think it really helps you build diversity in your tactics.”

Zuniga hopes that the demonstration of both the PCCA and the British team’s skill, along with the introduction of an interesting topic, inspires Pierce students to become more interested in debate.

“We got the best of both worlds. We were able to showcase not just Pierce College, but what the British team had too, and we were able to teach people about a new topic,” Zuniga said. “I hope that this inspires students to want a debate team here. I think, after today, a lot of people will be pumped for it.”