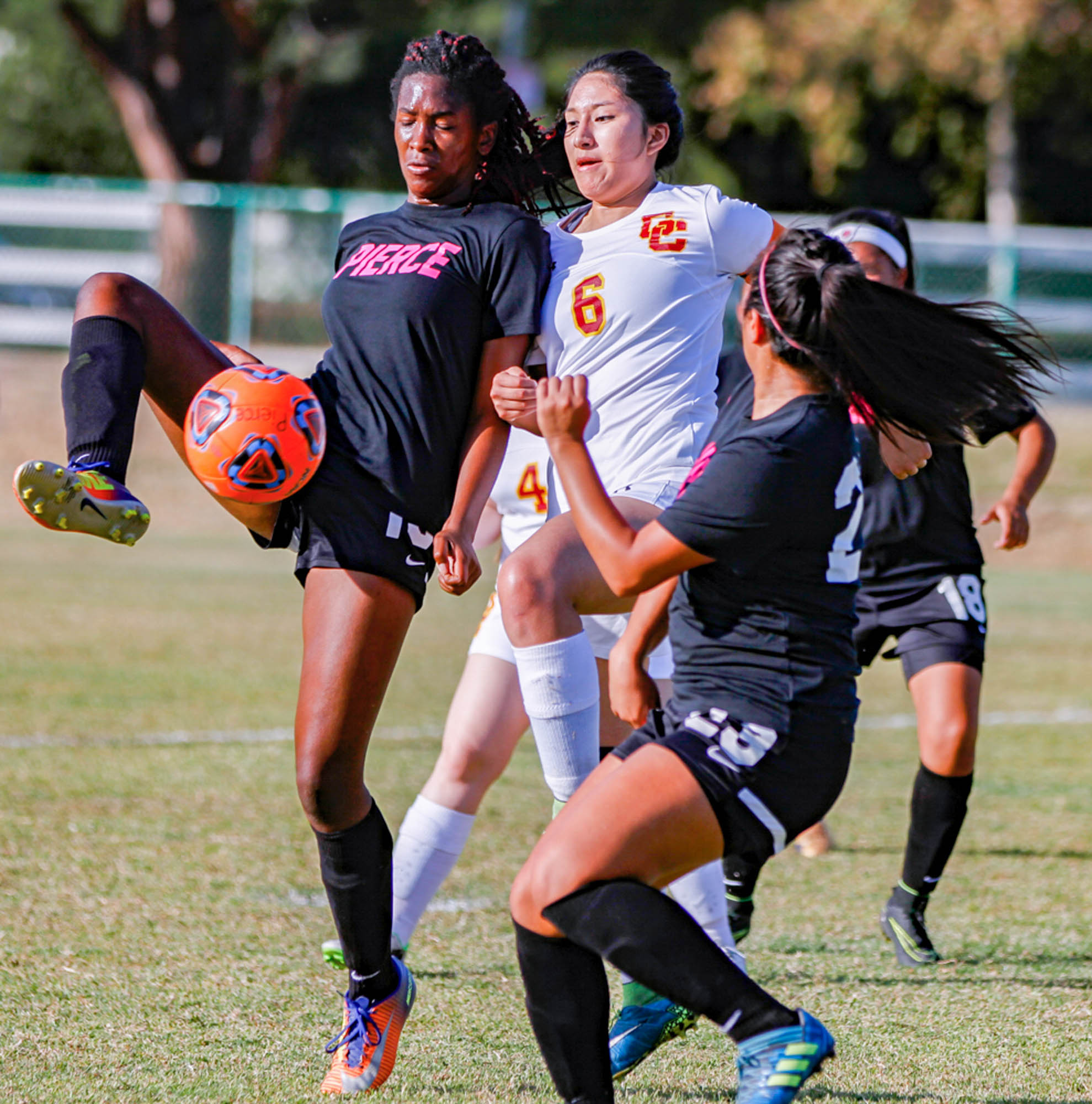 The soccer team scored a big win at home against Glendale College. In a game with many injured players from both sides, the Brahmas won 8-0.

The Brahmas started off strong scoring three goals in the first half. Tylee Low gave the team the lead, while Ashley Oviedo and Gisell Cruz joined the act.

Water breaks were taken by both teams due to the intense heat before the end of the first half.

The second half started and the fourth goal was scored by Diana Salonga.

Glendale had no substitutes on their side and it was becoming noticeable. The players on the field were starting to look exhausted by the middle of the second half and had nobody to replace them. All 11 players were forced to play the entire game.

Brahmas defense was steady and did not allow Glendale to pass and score on their side. Glendale had a few close shots but they were not enough to get through Pierce’s goalie Brianna Jacobo.

Gisell Cruz scored again for the Brahmas making the score 5-0. As the game continued, many substitutions were being done by Pierce.

Throughout the season many Brahmas suffered injuries during games. A few players are recovering but others had bigger injuries and will not play again for the rest of the season.

“We have a lot of players that are injured right now so it was good for players that don’t get a lot of minutes to step up. Some girls that don’t play a lot played full game today so that was good,” assistant coach Krystal Kutscher said.

The Brahmas kept making changes, rotating and giving minutes to all their players.

Destiny Brandstetter stepped in the field to score three out of the eight total goals that gave Pierce the win over Glendale.

The eighth goal was scored seconds before the final whistle. Brahmas won with a score that has not been seen at Pierce in about two years according to head coach Adolfo Perez.

“It’s hard to score eight goals in one game at any level,” Perez said.

The key factor to winning the game with such a big advantage was the really good practice the team had a day prior to the game.

“The girls were very relaxed. We worked on some patterns and finishing and they were able to do it,” Perez said. “Having so many players missing and still winning 8-0 was good for the girls, good for their morality.”

Kutscher said the team had 17 shots and finished eight of them.

Brandstetter said that because of all the injured players a lot of them had to play different positions.

“Personally I am a stopper and I had to play center mid and a forward today so I thought it was a battle. Even though we won 8-0 it was a battle,” Brandstetter said.

Brandstetter contributed to the team with the last three goals of the match.

“It’s a great feeling. It’s wonderful to help out your team and specially to boost up that win. It’s great,” Brandstetter said.

Regarding the opponent who had no extra players on their bench Brandstetter said they played their hearts out in this game.

“They played really hard, they played their hearts out, I honor that a lot,” Brandstetter said. “I have a feeling we are definitely going to win again. We are going to bring the 12th star home. It’s a good season.”

The Brahmas next game will be away on Friday, Oct. 20, against Valley College. Kickoff is at 4 p.m.