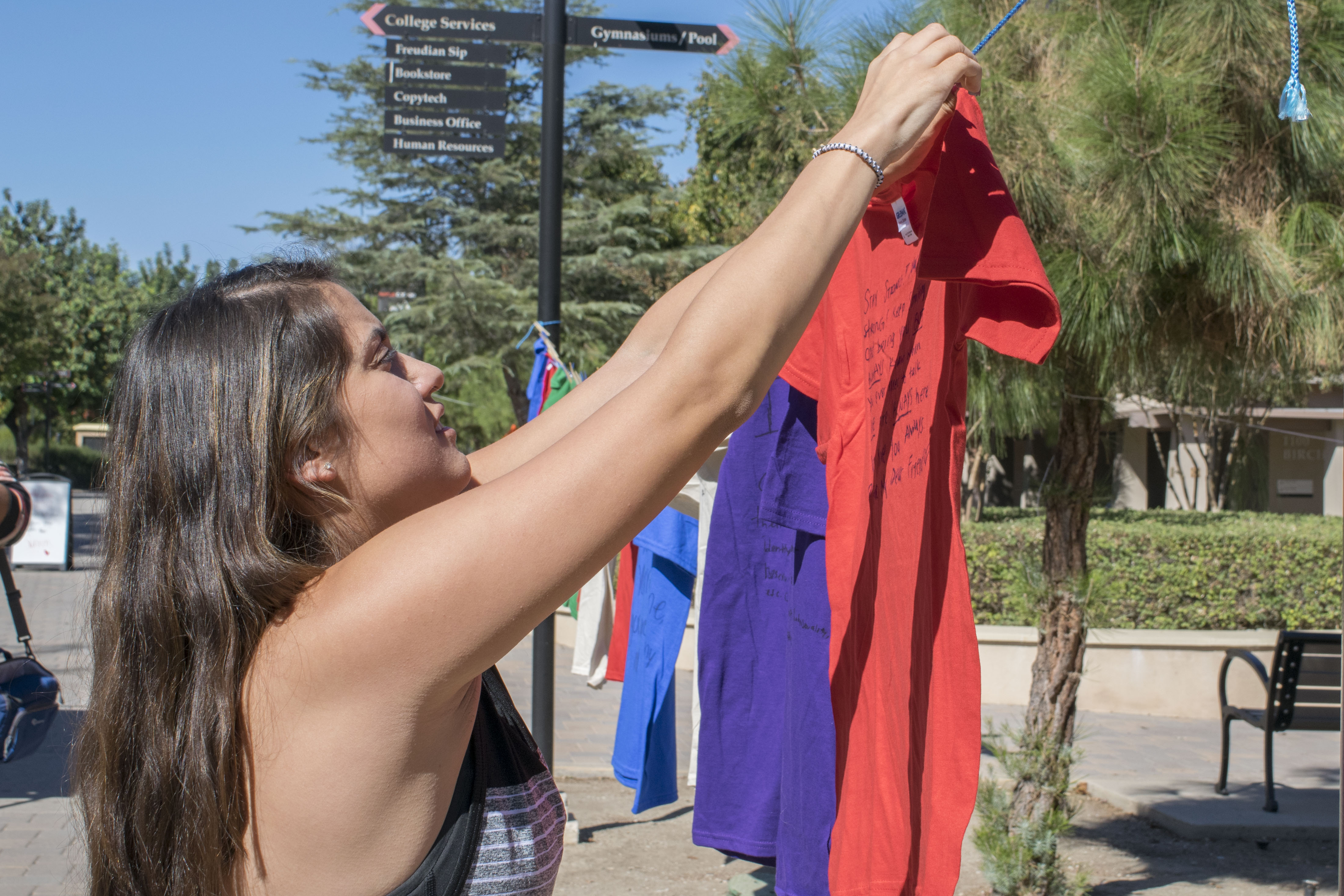 Stories of anger, sadness, strength and courage lined the Mall in the form of multicolored T-shirts that informed students about sexual assault for the Clothesline Project on Wednesday, Oct. 25.

The Clothesline Project is an event presented by the Associated Student Organization and B.R.A.V.E and is meant to raise awareness about sexual assault, sexual abuse and domestic violence.

In an effort to inform the community about these problems, students were able to write their own stories on a shirt or dedicate one to someone they know who is a survivor.

“I believe that it is required that we get shocked for a moment by what is happening around us and start thinking about it,” said Milad Malakooti, an ASO Senator who volunteered at the event.

Malakooti said he knows that this type of violence exists, and it is seen on tv and social media, but he thinks that they are not impactful through those mediums. He said that the Clothesline Project is different because it is interactive and openly presents these problems and makes it hard to ignore or disregard.

“They get surprised because they know about these problems, but they never have to see it, or have never seen the big picture like this,” Malakooti said.

The project helps build a community, according to Malakooti, because students see these shirts and the things that have happened to students at their school, and they understand that it really does happen, and it is up to them to recognize and step in to lessen the problems happening around them.

The event is organized by a collaboration of several groups to ensure that there is support for the students who wish to be involved with the project.

“Student Engagement, ASO, the B.R.A.V.E program and Student Health Center on campus work together. We also partnered with Holly Hagan, who has historically lead this initiative on campus,” said Lara Conrady Wong, the Student Engagement Coordinator and Counselor.

Conrady Wong said that the Student Health Center has partnered with Strength United, an outside agency that educates students about sexual assault awareness as a part of Title IX programing in education for Pierce College students.

Jeanny Escobar, an intern at the Student Health Center, said that students who visit the Clothesline Project would be able to receive help for any concerns they may have about sexual assault.

“We want to raise awareness that your health isn’t just about the physical health, but also mental health. You can come in to the Student Health Center and talk with psychologists,” Escobar said.

Co-chair of Social Culture Committee Maryam Yahyaui said that students who experience trauma have an outlet for their experience, but also the shirts and stories may resonate with the people who victimize others.

“Students who come here express their feelings of trauma, could explain and write their feelings down on a T-shirt and it makes them feel better,” Yahyaui said. “Also, students who caused these problems for other people see these shirts and think about it and stop the terrible things.”