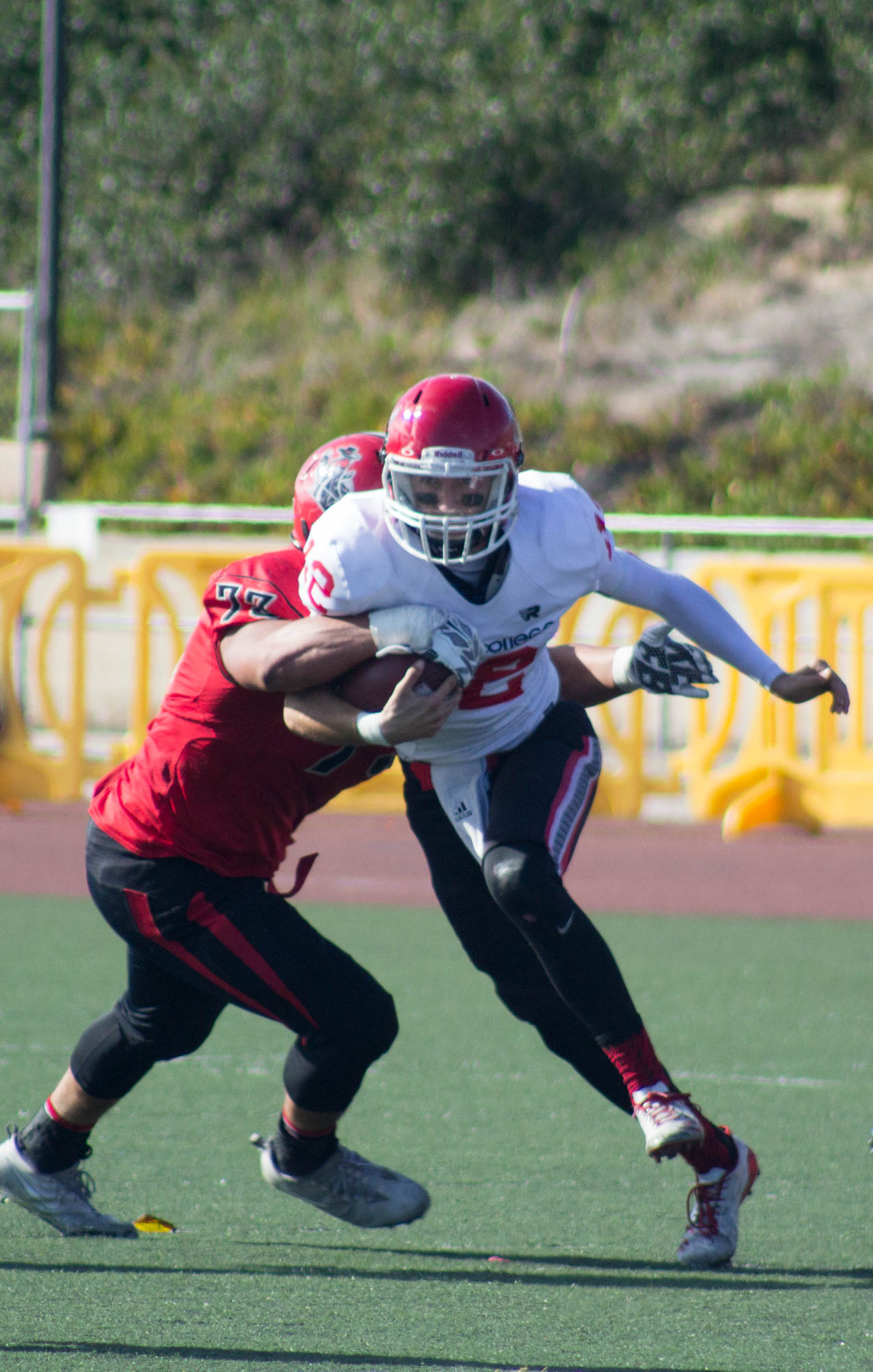 The Brahmas were slow out of the gate, allowing the Vaqueros to jump out to an early 20-0 lead by the end of the first quarter.

“We played at their level, that’s what I told the guys after,” coach Dylan Flannery said. “Our defense came out flat. I’m very confident they underestimated this team and it showed.”

Both sides of the ball struggled at the start of the game for Pierce. The offense failed to cross its own 40-yard line until six minutes into the second quarter.

“They haven’t played a one o’clock game since pop warner football,” interim head coach James Sims said. “Most of the kids had to wake up at 5:30, 6 in the morning, came here and had breakfast. Then we had a two-hour drive, we’re right by the beach. It was everything but football.”

The offense woke up after more than 20 minutes, scoring on its final two possessions of the first half.

Quarterback Steven Frost connected with receiver Wesly Touze for a 1-yard touchdown, and Richards scored his first touchdown of the game on an 18-yard run on the next possession.

The offense sparked the defense, which forced three consecutive three-and-outs at the end of the first half and into the second.

“Once we all started getting a little pep in our step and flying around, our guys started doing their jobs and getting tackles,” Flannery said. “Aside from a few missed tackles we did our job.”

Richards tied the game at the end of the first half, this time from 2-yards out.

The momentum continued over to the second half, with the defense forcing a three-and-out and Richards giving the Brahmas the lead with his third touchdown of the day.

“This week of practice wasn’t the best, but coming into the game we knew this was a big game for us,” receiver Joseph Branch said. “At halftime, we talked about doing what we do best, executing the plays. Just know the game is not over, so we just have to keep our foot on the gas and do what we have to do to win.”

Pierce took the lead up to 14 with a Xandre McCleary touchdown run.

Things took a turn for the worse for the Brahmas when Frost went down with a knee injury in the fourth quarter, putting him on the sideline along with fellow signal callers Jonathan Saavedra and Jhakari Harrison.

With both Saavedra and Harrison out for the game, receiver Quentin Palmer was prepped as the emergency quarterback during the week.

When Frost went down with a torn meniscus, the Vaqueros found their way back into the game.

“We had to change the offense and go back to things that we really didn’t want to do,” Sims said. “It allowed them to keep getting the ball back and of course catch up to us and get us into overtime.”

The Vaqueros Emmanuel Nwosu scored twice, once on a 39-yard reception, the other a 7-yard run, to send the game to overtime, where they kicked a field goal to take a 37-34 lead on the first possession.

“Even though we were in that situation, both the offense and the defense, we bend, but we don’t break,” Richards said. “We were still going. Four quarters and we played to overtime and we gave it all that we got and we came out with the result that we wanted.”

Five plays later Richards scored his fourth touchdown, a 7-yard run, to send the Brahmas home with the victory.

Sims had one word for Richards game, “impressive.”

“A couple plays he came to me and asked for the ball,” Sims said. “He was having a good game, running tough, so I fed it to him.”

Richards gave all the credit to his teammates for his game.

“I wouldn’t be able to make those plays if the O-line wasn’t make the hole big enough for me to read and the receivers weren’t blocking down field,” Richards said.

The victory, paired with a loss by LA Valley College to Citrus College, keeps the hopes of a bowl game alive for Pierce.

With a win at Antelope Valley College (5-4, 3-1) in the final game of the season, the Brahmas will finish in second place in the American Pacific Conference, securing a postseason bowl berth.

Kickoff is scheduled for 6 p.m. on Saturday.