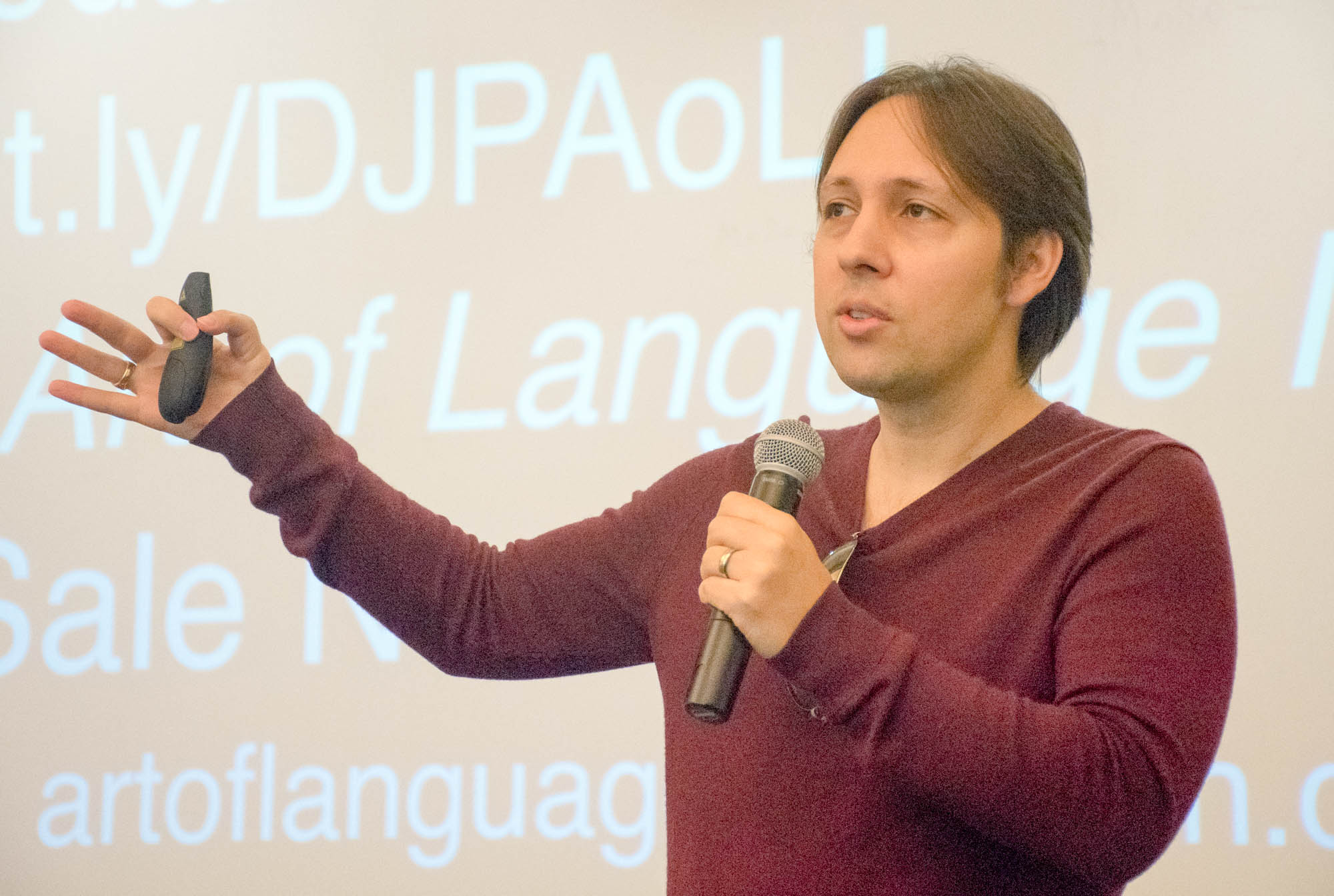 Language reflects the culture of those who speak it, even if they live in the fictional lands of Essos or the post-apocalyptic world of “The 100.”

The Anthropology Society hosted language creator David J. Peterson to share his professional experiences in a presentation titled “The Art of Language invention” on Monday, Nov. 6, in the Great Hall.

Stephanie Stone, president of the Anthropology Society, said that Peterson was invited to speak at Pierce to highlight the relevance of the culture present in linguistics.

“It’s the one subset of anthropology that’s sorely underserved, so people aren’t getting the correct exposure to it. It’s understandable; ‘linguistic anthropology’ isn’t a sexy term,” Stone said. “This is a way of getting people more interested in the subject, and because ‘Game of Thrones’ is so popular, this is a way of making it culturally relevant.”

Peterson has worked professionally in television creating language since 2011. Included in his body of work are the Dothraki and High Valyrian languages of “Game of Thrones,” the Orcish language of “Warhammer: The Beginning” and the Verbis Diablo dialect spoken in “Penny Dreadful.”

Peterson’s interest in language, both fictional and nonfictional, was sparked during his time as a student at University of California, Berkeley.

“As a freshman, I came in as an English major, but I was really, really fascinated by language,” Peterson said. “I started taking a whole bunch of language courses, like Arabic and Russian. I even had a chance to take Middle Egyptian hieroglyphics.”

Peterson explained that his fascination with created language began with his studies of Esperanto—a language developed in the 19th century with the intention of improving worldwide communication. He said that he was blown away by the concept of someone creating their own language and became inspired to take a course in linguistics.

“It was a class with no papers and no books to read, but with a lot of homework that were basically language puzzles. It sounded like the most fun thing in the world to me and it blew my mind that you got a grade for it,” Peterson said.

According to Peterson, he was inspired to try his hand at creating his own language during the very first linguistics class he took.

His first constructed language, or conlang, was an amalgamation of Arabic and Esperanto, which he named Megdevi after his girlfriend. However, he described his language as “a really, really complicated way of speaking English.” He realized that it was mostly a fictional translation of the English language with no distinct culture.

Peterson said that, in the early 2000’s, he connected with other language creators over the internet and that they learned better ways to create fictional language from each other. Through these interactions, he learned that it is important to actively reflect a culture when developing a fictional language.

“If you’re not thinking about how the language you’re creating reflects some culture, whether it’s one that you or someone else created, you’re going to unconsciously borrow things directly from your own culture,” Peterson said.

He elaborated on this point by bringing up the Dothraki people, a nomadic group of warriors from “Game of Thrones.”

Peterson explained that having the simple word ‘book’ in their language implies that their culture is one with a written system who values history enough to record it and possesses the knowledge to create books. However, he noted that the Dothraki have an established warrior culture with no writing system, and that including the word ‘book’ in their language effectively eradicates the fictional culture.

“If you follow in this path, you might as well create the Dothraki words for ‘cellphone’ or ‘computer’ while you’re at it. You’re just not accurately reflecting the culture,” Peterson said.

Peterson used the Irathient language spoken in the series “Defiance” as an example of a culture using familiar concepts to explain the abstract. He explained that the Irathians of the series originated from a world with prominent rivers, which resulted in the fictional race using the flow of water to describe the flow of time—the word for “upriver” denotes the future and the word for “downriver” denotes the past.

Peterson said that a lot of work goes into making sure that a fictional language properly reflects a culture, but is grateful that he has the opportunity to do so professionally.

“This is what I love. I love language, I love playing with language and I love doing it,” Peterson said.

Joanna Carpenter, vice president of the Anthropology Society, expressed appreciation for Peterson’s fastidiousness in his work.

“It’s such a cool thing to know that there are these languages that someone is really putting in all this effort to make work,” Carpenter said. “It’s really fascinating, and makes it that much more meaningful to know that it’s not just gibberish, that someone took the needed time and effort.”

Carpenter said that Peterson’s presentation effectively highlighted the relationship that anthropological subjects have with topics of general interest.

“He really brought to light things that are poorly understood, but are already a part of the things that you enjoy,” Carpenter said. “It’s nice that we were able to bring someone who can show that connection to people.”