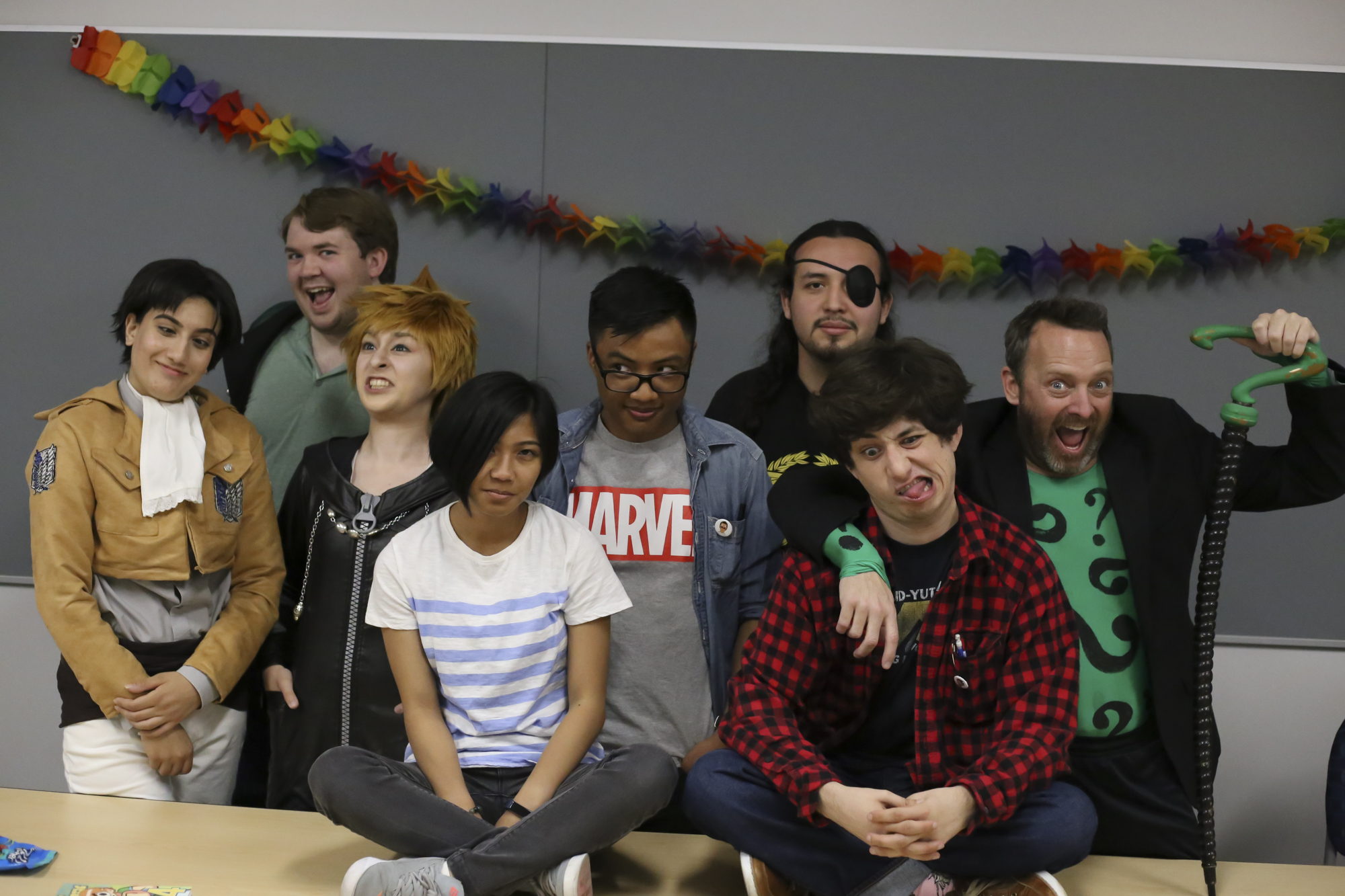 The orange hair appeared messy at first, but with a closer look, each neon spike, varied in length and width, is molded and angled perfectly. Beneath the bright bangs, dark eyes peer through blue contacts that belong to a body covered in a black pleather, with a matching cape chained together.

English major Madison Reeves is not dressed for Halloween. Rather, the vice president and treasurer of Pierce College’s Graphic Literature Club is cosplaying as a Disney-owned, Square Enix-directed video game character from Kingdom Hearts—Roxas.

Connor Drescher, Graphic Literature Club President, recalled attending a convention with Reeves and going to a restaurant while dressed in character, describing the experience as an empowering one.

“We went to WonderCon together and we sat in the middle of Chicken and Waffles together in that outfit, and it was probably one of the more formative experiences in my life,” Graphic Literature Club President Connor Drescher said.

Reeves said that appearing in public dressed as fictional characters has given her the courage to wear her cosplay regalia with confidence.

“I stopped caring about wearing cosplay in public like seven Denny’s trips ago and like ten conventions ago. I’ve been to way too many,” Reeves said.

According to Assistant Professor of English and Graphic Literature Club Advisor Mickey Harrison, Reeves, Drescher and the other members of the club revitalized the former Pierce College Comic Club after the first iteration dissolved due to in-fighting and subsequent disinterest last year.

“This year, it seemed like all the fire was lost. I really liked the club because I thought it represented a demographic on campus that is usually largely ignored, and I’m including myself in that. But comic book geeks and pop culture fans in general are marginalized from academia, so I thought this was a really important club to keep people on campus and bring people together,” Harrison said.

Harrison, who is occasionally referred to as Headmaster Riddler by club members, said he reached out to students in his English classes who might have been interested in continuing the club. He said Reeves stepped up, got the word out and reached out to Drescher.

Harrison said another integral change to the club was its name.

“The name was switched from the Comic Book Club to the Graphic Literature Club last year, as I feel that attracted a more serious audience,” he said.

“It sounds more inclusive, like instead of just comic books, we have anything with words and pictures,” Reeves said.

Drescher said the name change was a prudent decision given the club’s larger goals and its members’ academic aspirations.

“Part of the reason we’re here right now is to get more attention to graphic literature as an academic and respectable medium, which is the direction I think comics are going today anyway,” Drescher said.

Reeves, who helped generate an intentional space and community on Pierce campus as a seasoned cosplayer, said the ultimate goal of the Graphic Literature Club is to bring everyone together.

“This is part of why graphic literature club and english club and literary magazine are like the english trifecta. We’re all really good friends and hang out together,” she said.

Reeves said the club’s conversations and presence as animation advocates serve the genre their club seeks to further.

“Part of the goal is to make English palatable for the general student population because, a lot of the time, we study English in 200 year old texts that maybe people don’t care about that much. But then maybe they go see a movie and they’re like, ‘Oh my God, I love The Avengers, I love this character, I love this character arc,’” Reeves said.

Drescher said he believes graphic novels challenge the notion that the only stories worth reading or watching are classics.

“There’s this great part in this manga, “I Am a Hero.” It opens up with this guy who is a manga assistant, and he beings this conversation with this guy in his office and says, ‘You know what is great manga? Great manga will last 10 years and will always be relevant,’” Drescher said.

Drescher said manga is meant to be the media of today, and ought to be consumed and appreciated at whatever rate readers see fit.

Drescher said Shakespeare lasts for a reason, and that he suspects that graphic novels like Watchmen and Maus will be read one hundred years from now as well