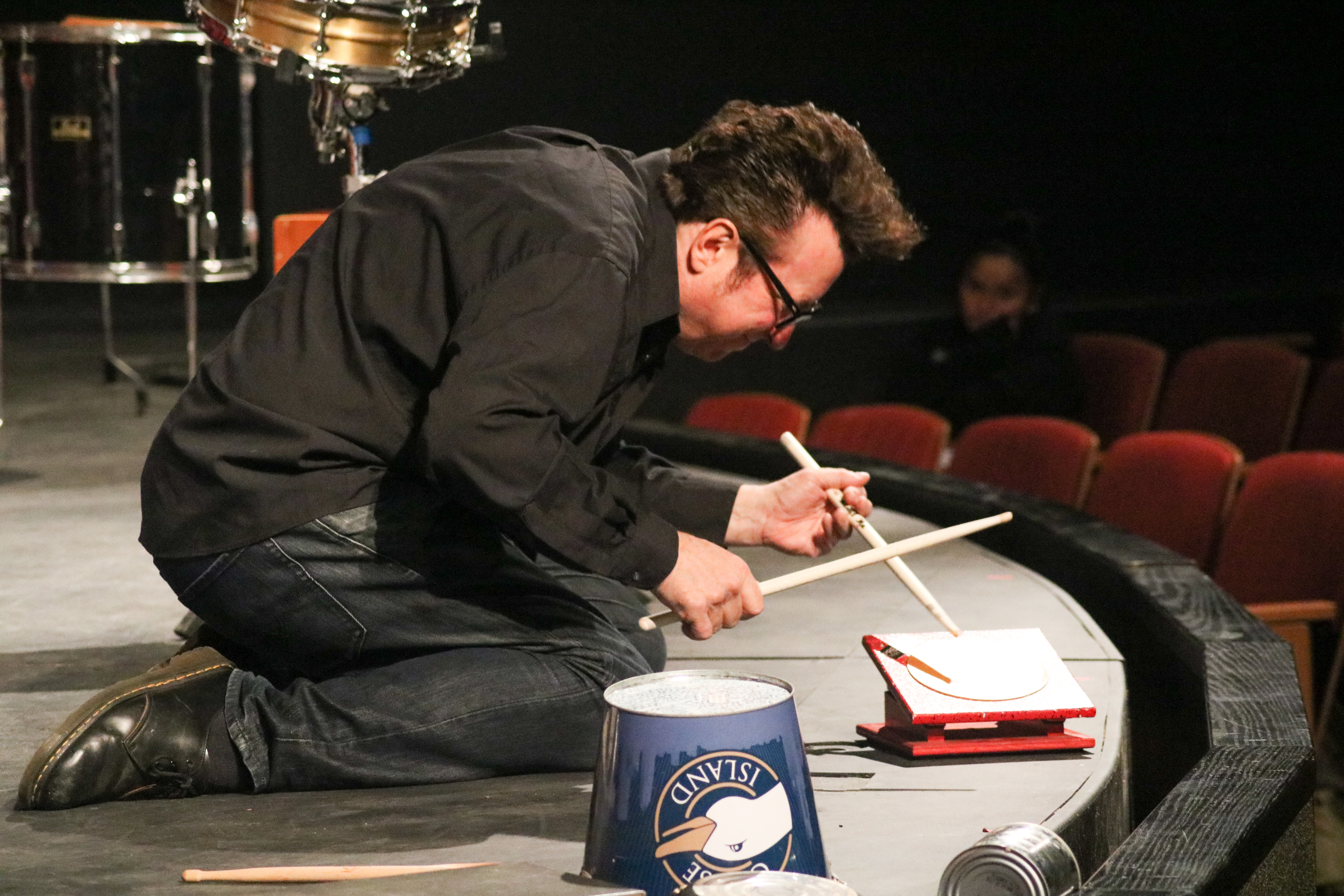 You’ve heard him, but you may not have heard of him.

A distinguished jazz percussionist, who sold close to 4 million records and played for 15 years with the multi-Grammy award-winning Brian Setzer Orchestra, is making himself known on campus.

Many students at Pierce College gathered in the Performing Arts Building to watch a solo improvisation by Bernie Dresel, the band leader of, “The BBB Featuring Bernie Dresel.”

Students applauded as Dresel walked down the steps and graciously rolled onto the mainstage, producing laughter from the crowd.

Before the performance started, Dresel instructed about 12 students to volunteer and run on stage to play side instruments for part of his act.

Dresel said this is his first time performing a solo improvisation in front of an audience.

“You are just going to hear sounds today, drums and me trying to make music for 45 minutes,” Dresel said. “It’s going to be a continuous piece.”

After another roar of applause, Dresel made his way to the front of the stage and squatted down. He picked up two large wooden spoons and led an intricate sound upon two pots. Dresel rotated the beat and intervaled some swings to a bucket and aluminum can.

Using the stage floor as its own instrument, Dresel waved the spoons back and forth upon the floor and other unusual props. He did not fail to impress, as his rhythm gained dynamic energy. His drumsticks hit the floor like a machine gun.

He continued his pace, forming a rhythm off his own drumsticks before propelling himself to the snare. Another surge of applause erupted from the audience after Dresel made a dramatic pause.

He worked his way elegantly to the high-hats and crashes, producing a lighter tone to the ear. The groove picked up just as quickly as it formed into another silent pause.

The sound of suspense flooded the air as Dresel changed the tone, simultaneously hitting toms and snares with a consistent kick drum. Creativity ensured as Dresel frolicked a high-hat and grabbed it to a halt with his bare hands.

In a matter of minutes, Dresel took off in a flash and demonstrated variation left and right. One instrument after another echoed the mainstage, bringing a new form of sound with each reintroduction. All eyes were glued to Dresel’s transient movements.

Dresel rotated the instruments until his back was completely facing the audience. The rhythm stayed persistent yet remained ambiguous.

Dresel made his way back to face his audience, hitting each tom and snare in his path all while keeping the kick drum steady.

Halfway into the performance, Dresel shot up a peace sign to the audience and that was their cue.

“Ladies and gentlemen, the audience!” Dresel shouted while maintaining the groove.

Eleven students came pouring from the audience up onto the stage within the blink of an eye. The students positioned themselves and quickly matched the beat to Dresel’s fast pace.

Congas, tambourines and claves were brought to life at the command of the student volunteers.

Vibrant sounds encapsulated the building when all instruments came together in different directions. The overwhelming array of noise livened the audience with its resonation. Dresel soon called off the group and formed yet another unique beat in the next set.

The improvisation never caved in as Dresel glided over his custom Craviotto drum set. The high-hats rang like church bells and struck the audience in a trance.

The performance came to a close as Dresel swept the audience off its feet. The electric energy of his final movements shocked the drumsticks right out of the grasp of his fingertips onto the floor.

The crowd cheered, laughed and applauded once more with Dresel’s unique finish. He promptly gave a Q&A after, letting the audience speak their mind and even get autographs at the end.

The next concert held will be in MUS 3400 on Oct. 25, and will feature the Kadima String Quartet.