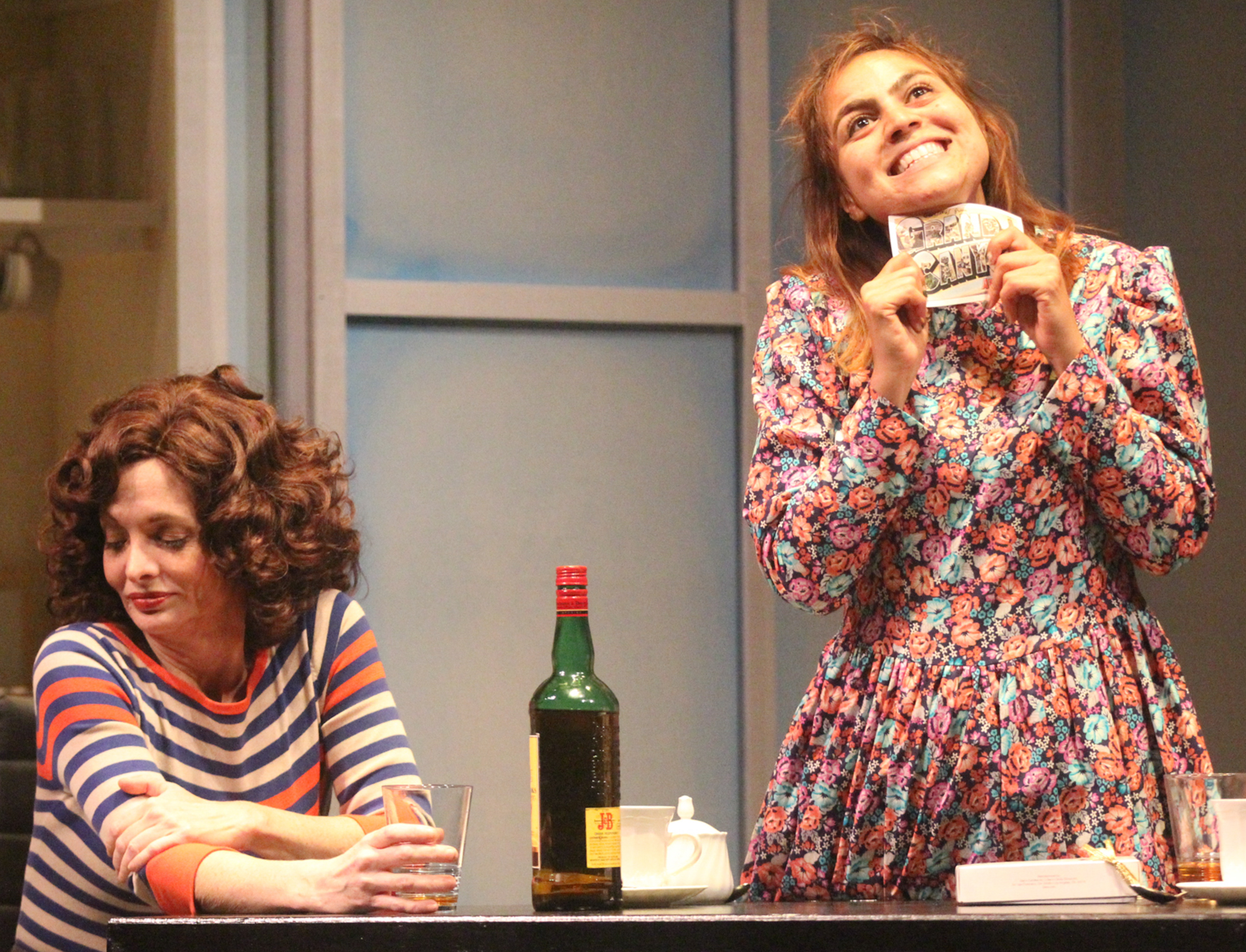 *Correction: After the opening scene the play does not jump to present day. It jumps to 1982 London

*Correction: The sets minimalistic aspects are not a reflection of Pierce’s Budget, but a production choice.

Success is predominantly measured by a career and a family. But for many women hindered by social constructs, they usually have to choose between the two.

Pierce College opened its theater season with Top Girls, an amalgamation of the women’s struggle to fulfill societal roles throughout history and today. Directed by Shaheen Vaaz, the two hour drama runs through Oct. 28 at the Dow Arena Theatre.

The engaging, though at times confusing story, delivered by a mostly skilled cast, is partially undone by a couple of sound elements that disrupt the play’s flow.

That mixed bag begins in the opening scene, which features an eclectic bunch of prestigious women from history and paintings. They tell tales of adventure and heartbreak around a dinner table hosted by Marlene (Justine Brandy), the main character going forward.

The scene is abrupt and confusing. In true dinner party fashion, each character goes on tangents of their respective stories simultaneously. You could see what Vaaz is attempting to do, but it only leaves the audience confused as to which story to follow in a mess of rambling. The other problem is that for no obvious symbolic reason, loud clanking of chains began to take over a key monologue from Lady Nijo (Alexa Maris), a 13th century Japanese concubine. The sound lessens the emotional impact the actor was going at lengths to reach.

The opening scene thankfully doesn’t set the stylistic foundation for the rest of the play, which jumps to present day. Marlene, a successful business women, is reconnected with her sister Joyce (Jasmine Curry), a hardworking mother, and Joyce’s daughter Angie (Sabrena No’Mani), a young teenager enduring an identity crisis.

Angie is a menacing teenager with an inability to connect with women her own age. It’s unclear what Vaaz wanted Angie to represent, but she is portrayed as someone in their youth who is utterly corrupt. Acting by No’Mani at times was overly aggressive, making it seem as though Angie is actually mentally ill, when in the end she seemed to be a bratty teen with anger issues.

Top Girls is uninhabited by common tropes present from grandeur stage productions where set pieces overshadow acting performances. Sets would often be converted to other important props. The only real set pieces present are tables, chairs, silverware and a cabinet that was built into the set but would be hidden by a wall when necessary.

It’s clear Pierce College’s Theatre didn’t have proper loans for sets and props, but scenic designer Sarah Webster made the most of it, displaying her creative chops with every scene in the play. In the bedroom scene when Angie and Shona (Asia Herbonson) discuss life while hiding from Angie’s mother, the set transforms by flipping tables and draping blankets across it, representing a bedroom. This allowed for the acting and story to remain the central element.

Angie, who flees her mother because of the toxic relationship between them, goes to visit her aunt Marlene, who hasn’t been present in her life. Marlene is in a leadership position having climbed her way up the ladder over men competing with her. Angie is resoundingly impressed by the strength and power Marlene instills, something that’s not prevalent in the role models in her life.

Top Girls’ exceptional lighting by John Jones is notable during the office sequence in the middle portion of the play where they were able to create a whole office floor in the small stage given. Three scenes were taking place at the same time but Jones creates circles of attention around each scene so the audience doesn’t feel confused.

As Joyce and Marlene, Curry and Brandy are the driving force of the production. They play off of one another well. In their main scenes, nothing seems rushed or overly choreographed. The actors take the time to reach emotional heights necessary to the scene.

The intimate number of seating paired well with these impressive performances as it truly brought the audience into their world.

Top Girls’s technical flaws don’t undermine the central plot of the story. Its stellar performances by its all female cast carry the play well and its thematic expressions should hold importance to young women for years to come.

Top Girls runs through Oct. 28, and tickets are available at www.brownpapertickets.com