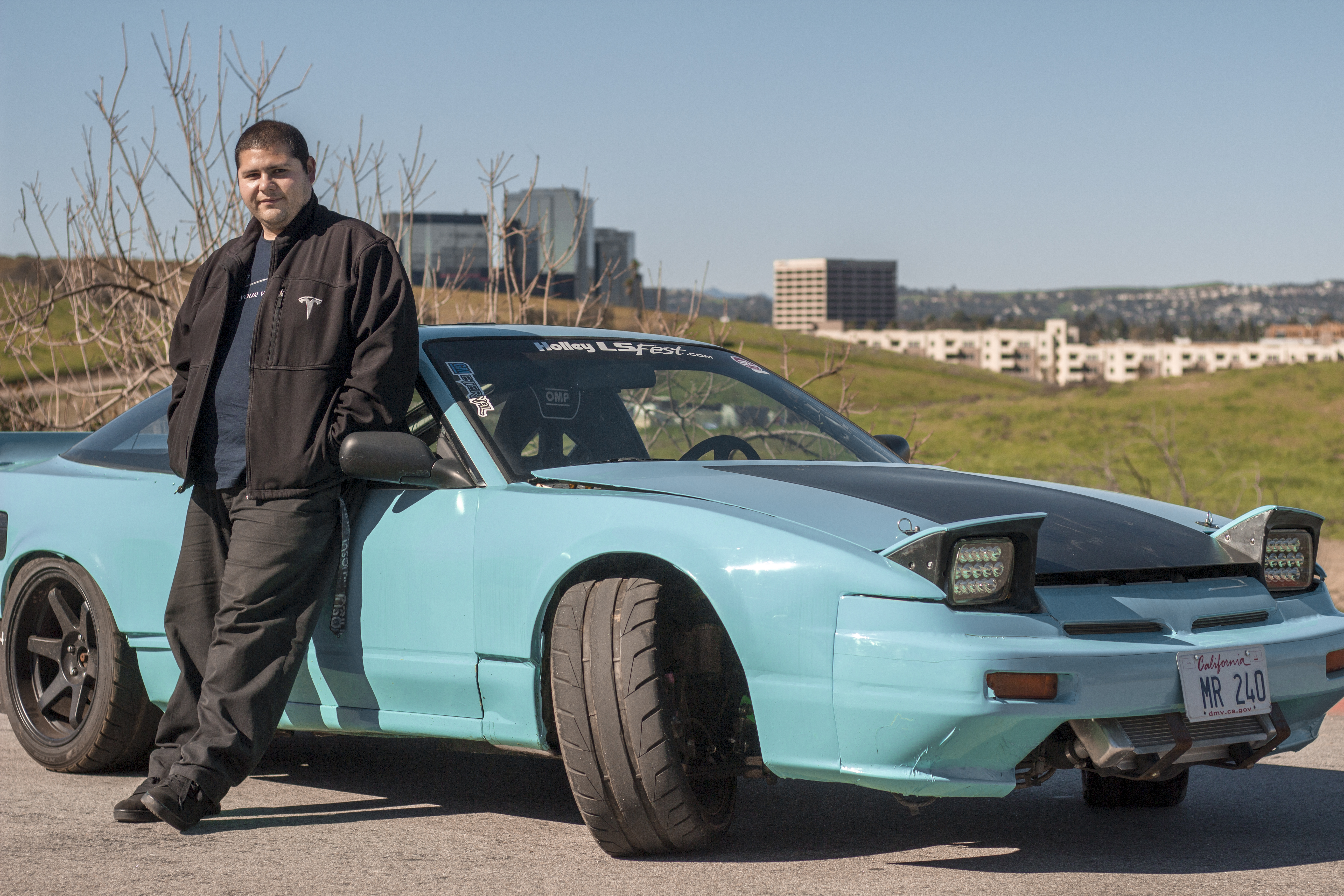 From scooting around Santa Monica Smog shops to driving decked out eco-friendly cars, Steven Guevara can say he drove his goals to the success finish line.

Guevara is one of the head technicians at the Tesla Van Nuys Service Center and an instructor to entry level technicians for Tesla Motors.

As a teenager, Guevara had dreams of becoming a truck driver. However,  it wasn’t until he was 19-years-old that he discovered he had two obstacles in his path – one of which was due to age.

“You have to be 21 years-old to get your certification to handle hazardous material, and nobody will hire you unless you have that,” Guevara said.

With a long journey ahead and no drive to waste, Guevara knew he needed to start somewhere. That somewhere just so happened to be at the undercarriage of his first car, a Chevy Cobalt.

Guevara’s passion for working on his car sparked a powerhouse when he enrolled as a student. Many of his professors took notice of Guevara’s natural skill and drive and they began encouraging him to turn his handy hobby into a career.

“The teachers steered me into the right direction and pushed me to be more than just a technician. They pushed me to not just go for just any shop and to never stop learning,” Guevara said.

Guevara learned many lessons from many of his professors, but one  professor was the most impactful on his college career, Professor Tom A. Fortune.

Thomas A. Fortune, the Chairman of Industrial Technology Department and instructor of Auto Technology classes at Pierce College, sees many students every day in his classes.  Students enroll in automotive classes for hobby or tend to stay in the class for a short period, therefore, Fortune has a hard time deciphering the inspired from the uninspired students at the beginning of the semester.

“Steven was a good student, attentive, quiet, always did his assignments, and never gave me any problems,” Fortune said. “You never realize what you have until you are looking at it, and Steven was just that. I never realized how talented and skilled he was until I was looking at the grades and final assignments at the end of the semester.”

Not only did many professors encourage Guevara to push himself but counselors as well.

Pierce Adjunct Counselor and Industrial Technician Alex Villalta has been at Pierce since 2015 teaching Automotive Technology. Villalta was Guevara’s professor during his studies and immediately began to notice his complex natural ability.

“He was always paying attention, going over and beyond expectations, and overall just being engaged and challenging in the field. He was definitely very good with electronic equipment, which most people are not,” Villalta said.

It wasn’t until Villalta and multiple other faculty members and students heard about Guevara’s big project, The Swap, that they knew he was destined for transportation greatness.

“He did an engine swap, which was quite impressive. He took a Corvette engine and put it in a Nissan 240 SX body, which is completely different and way bigger. Everything that you can think of he did himself,” Villalta said.

With all the knowledge Guevara acquired from college, he applied for an Entry Level Tech Position with Tesla Motors and got the job.

“The Tesla Santa Monica showroom is right next to my route home.  When I began noticing the car showroom while sitting in traffic everyday, I knew one day I’ll work at a cool car company like that,” Guevara said.

Guevara said he loves working with Tesla Motors as an Instructor and Technician. He compares the job to working in another company known for its innovations.

“It’s a very high and fast paced environment, busy all the time and its phenomenal at how quickly we are expanding. There’s a lot of deep culture involved, very similar to Apple. It’s a very tight group,” Guevara said.

Guevara is happy to know that a lot of students here on campus are following in his footsteps, and are looking to get involved in the future of automotive. Guevara encourages students to continue to educate themselves through reading and learning about thier passion.

“All you have to do is one step a day, and that’s all it takes. Something very minimal, not some unrealistic goal. Just something everyday to prove you’re moving forward,” Guevara said.

Guevara is looking forward to being more involved with on-campus events coming the first week of March this spring semester.

“I definitely want to get my Nissan 240 SX out there because a lot of students want to see it because it’s very Frankenstein because there are so many different parts in there,” Guevara said.