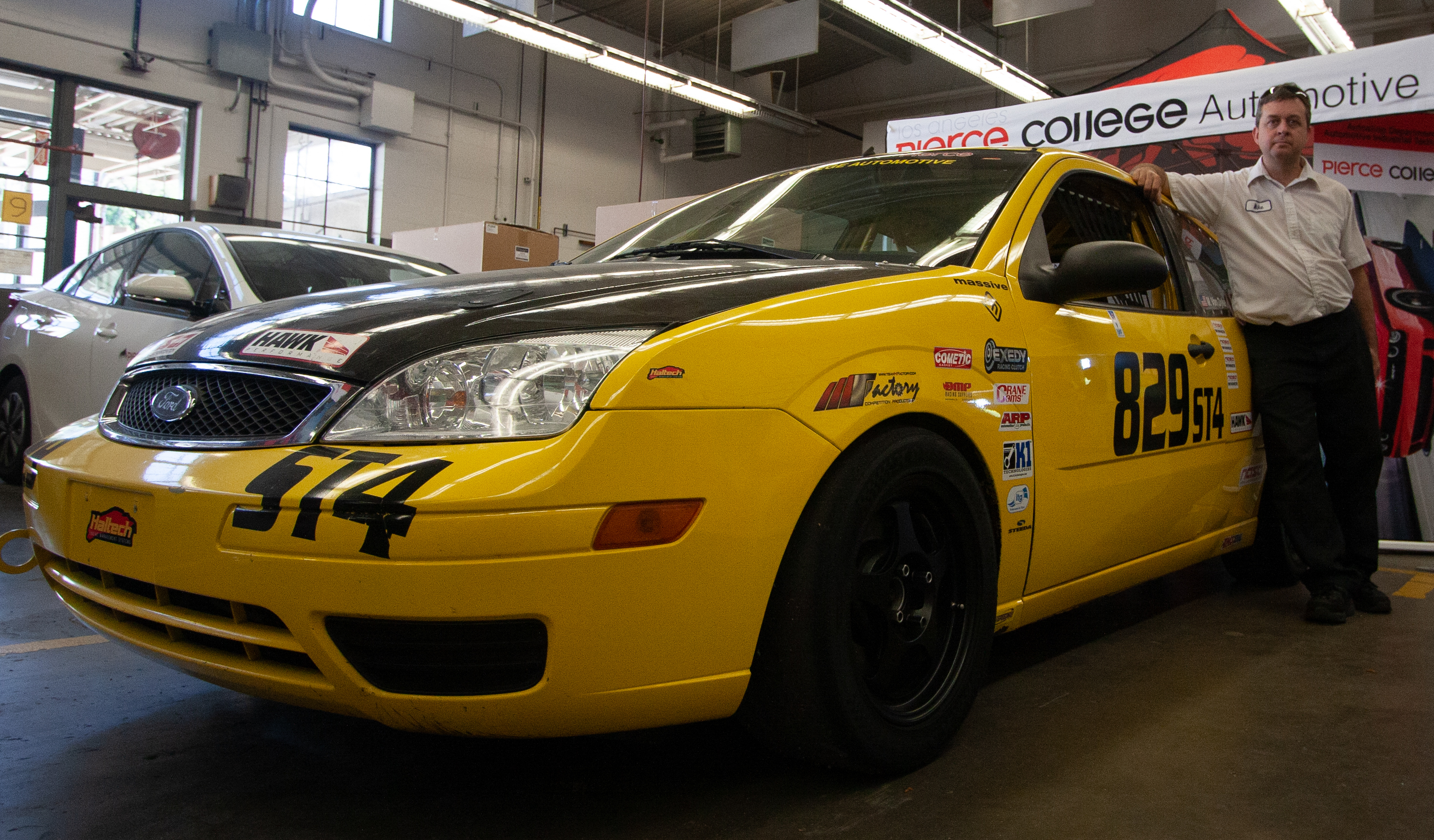 The 2007 Ford Focus was a budget car made to carry a family on public roads. After gutting his out, Michael Van Dyke is the only person his Ford Focus can safely seat, and after rebuilding the engine for performance, the only road it can legally be driven on is a race track.

Van Dyke did not steer away from the challenge of building a race car from one that was never meant to race, in fact he steered toward it.

“it’s an economy car, and trying to make it work as a race car is just fun,” Van Dyke said. “One of my main competitors races a Nissan 350z in the last race weekend, and another one of my competitors was racing a Lotus Exige. My car’s front wheel drive and most of my competitors are rear wheel drive cars. So it’s fun for me to try to get this car to work as a front wheel drive and be competitive with these other cars that actually have a little bit more of a sports car heritage. So that’s part of the challenge that I enjoy.”

Van Dyke would then compete in the NASA (national auto sport association) professional racing series to win first place on April 5, and 6 in the ST4 class.

“We had our second race weekend this season, and throughout the year we have five weekends, and 10 races,” Van Dyke said. “I qualified first and then I won my class on Saturday and then qualify first and won my class on Sunday. So it was an awesome weekend.”

This transition into a super touring race car did not happen right away, at first Van Dyke did use it for its intended purpose.

“I originally got this car just for transportation and daily driver, but being a car guy one of your problems is you start looking at things to modify, and at the time I didn’t think much of the car but then I’m driving it and I said ‘Hey, they make suspension stuff for this thing, coil over kits’ and at then in time I was doing track days at the racetrack,” Van Dyke said. “So I started modifying it more and it just sort of grew as I found more aftermarket parts companies making performance parts for this car. And then it just became a dedicated race car.”

Tempted to invest in some performance car parts to supercharge your own vehicle? You might want to Compare Performance Parts online to ensure that you get the best price.

At first Van Dyke was competing in solo time trail races where you race against the clock. After some success he wanted to take it to the next level by competing wheel to wheel against other drivers.

“I started racing time trial which the safety requirements are more lenient,” Van Dyke said. “I ended up getting second place for the season for time trial in the entire championship, and that’s really what sparked the racing bug. So I decided to build it into a, a dedicated wheel to wheel car.”

To compete in wheel to wheel racing the Focus needed to have safety specifications such as a roll cage, and a six point harness. With adding these and performance parts, Van Dyke still maintained a pretty small budget.

Van Dyke said that the beginning of the race is the most important part.

“The start is probably the most intense part, especially coming into that first turn because all the cars were all packing in and,trying to find room,” Van Dyke said. “I remember it was on Sunday and coming into the first turn, there’s cars next to me and I’m two wheels in the dirt, and Trying to get through the first turn because you don’t want to lose position and then your competitor uses that as an advantage to start creeping up on you.”

Van Dyke recalls the most extreme maneuver he had to do during a race by raising two wheels off the ground.

“This is at Buttonwillow, which is one of the tracks that we race at south by Bakersfield, and it’s a very technical track with a lot of ups and downs,” Van Dyke said. “This is Phil Hill, which is a turn that’s at the crest of a hill. And one of the things about Phil Hill, you’re coming up over the top of this hill and you’re turning at the same time and there’s some curving on the edge of the track. So if you clip that curving, then your wheels come up off the ground.”

Van Dyke has gutted out the car by taking out all the interior to save weight, and has modified the engine for performance.

“The car was 2,600 pounds without the driver when it was stock. With me in it and the minimum weight now is 2120, so I’ve taken about 300 pounds off the car,” Van Dyke said. “This engine has been built up. It has all forged internals, 12 and a half to one compression, it has a ported flow bench head and cams, and a dry-sump oil system that makes it 265 horsepower of the crank.”

Prior to becoming a professor, Van Dyke worked at ATR, the automatic transmission rebuilders association, for 7 years where his drive to teach automotive would develop.

“I worked for a company called ATR, and I wrote magazine articles for Gears magazine, which was one of our publications and we put together training courses for technicians working in the industry,” Van Dyke said. “That’s where I got that experience, as I started teaching there, and then I started teaching part time here, which turned into a full time position.”

Van Dyke doesn’t just use the car for racing but also as a way to promote the auto program at Pierce.

“I use this car quite a bit to promote our auto program is I’ll take this car to the local high schools, and they’ll have career days. We’ll talk about our program to get the students interested, just to bring something to catch their interest and and get them interested in automotive”

Seeing students succeed through the automotive program is one of Van Dykes favorite things about teaching.

“I like working with the kids and that’s the main thing here. We have a lot of opportunities in our industry and there are dealerships and repair shops calling us all the time,” Van Dyke said. “I think it’s one of the most satisfying things is to take one of our students who’s come out of our program with the training hat we offer and they go out and get a job and a career and that to me is very satisfying.”

Also through racing, Van Dyke wants to set an example to other students who might be interested in autosports.

“These kids want to buy a car and mess around on the street, and then they end up getting tickets and their driving license revoked and it costs a lot of money,” Van Dyke said. “What we tell kids is go out and get a job and get a trailer and a truck. Then you can do this at the track and it’s gonna cost you less in the long run.”

“Mike is the only one that’s taught that class for quite some time and it’s because he has that connection with his race car,” Villalta said. “Because the students can throw everything at him as in, ‘Do I want to put a three inch exhaust pipe versus between short drive it’s stock pipes,’ and obviously he experiences it out on the racetrack. He didn’t get a first place for nothing.”

Automotive student Bryan Flores who takes computer class with Van Dyke believes that it is great that he is involved with automotive even outside of teaching.

“He likes to gloat a little bit in class i’m not going to lie, and I do see him tuning his car on a daily basis at Pierce,” Flores said. “But It is good to know that we have a teacher here that’s not just in the classroom but also still out there in the field.”

Van Dyke concludes with some advice for students who may be interested in learning automotive.

“These kids come out of high school and they don’t know what they want to do. And if you wait until you’re in your later on in life it’s gonna get harder,” Van dyke said. “it’s a race to take advantage of that career opportunity and take advantage of it, and as soon as you can and just set those goals, and recognize when life is giving you the green flag to just take that next step.”