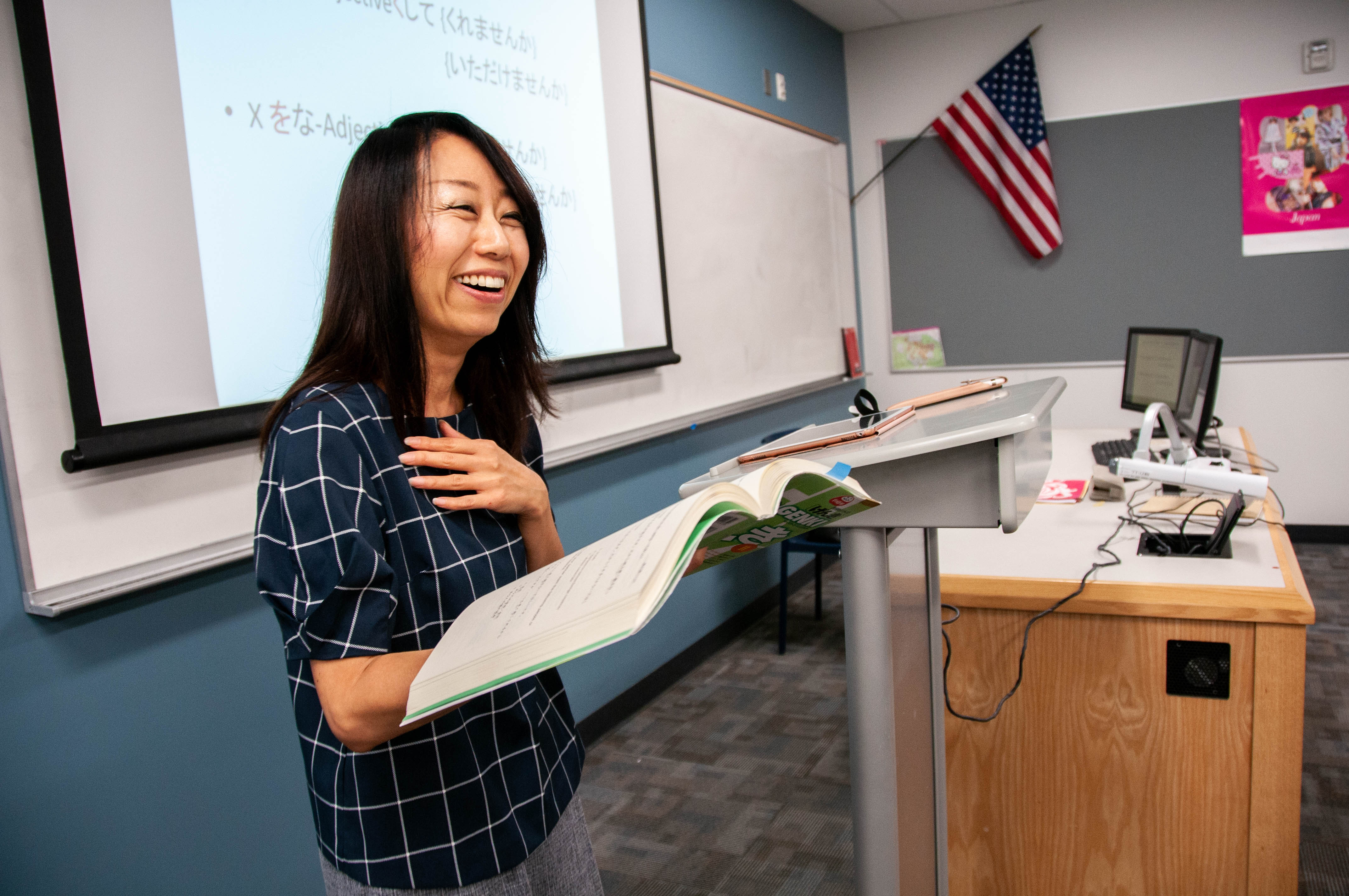 It’s ironic that language was the thing that brought Japanese Professor Yoshiko Takase to Pierce College, even though it was what could have possibly prevented her from coming here in the first place.

Takase was born in Ishikawa, but grew up in Osaka. After obtaining a B.A., she worked for several years at a travel agency for Japan Airlines.

Takase said that she had always wanted to come to America and at the time Japan Airlines had an opening for a position in their Los Angeles branch, and Takase applied for the position hoping that this would be her ticket to the United States.

However, the interview didn’t go as expected and Takase didn’t get the job.

“My English was terrible. I had to do a phone interview in English, on speakerphone, in front of a bunch of executives.,” said Takase. “I couldn’t say anything.That was a sad experience. But I realized that I needed to improve my English. That meeting motivated me to come to America and study English.”

Takase took ESL courses at California State University, Northridge, and obtained an M.A. in linguistics. In 2005, she was hired at Pierce College as a Japanese language teacher. From there, Takase soon discovered the differences between Japanese and American students.

“Our education system is so different in Japan,” said Takase. “We are taught ‘Listen to your teacher, do whatever the teacher says’. It’s passive learning. You listen, take notes and believe whatever the professor says. We were not given time to discuss.”

Takase said that in Japan there is a strict hierarchy between professors and students. Japanese students rarely confront professors and it is considered disrespectful for students to speak casually to superiors.

Although Takase does not approve of this strict formality, she has found herself surprised at how casual American students can be.

“We were doing a workbook exercise, and a question was asked ‘How many Japanese friends do you have?’,” said Takase.  “One student raised his hand and said, ‘Sensei, we are friends, right?’ And asking that would be unacceptable in Japan. First of all, professor and student, there is a boundary. My Japanese mind tells me ‘Oh my god, this is unbelievable.’”

However, Takase tried to look at the question from a more American perspective.

“Initially, I was kind of upset,” said Takase. “But then I thought ‘Maybe this a compliment’, and I asked students ‘Do you think of other professors as friends?’ And half of the class said ‘Yes’. So I thought ‘Huh, students can be friends with professors.’ That was very new to me.”

One of the challenges of teaching Japanese to American students is that in Japan, there are different ways of speaking between peers and superiors. Words, phrases, and even grammar can change based on the age level or profession of the person that you’re conversing with.”

“Japanese culture is based on who you’re talking to,” said Takase. “If you are talking to a professor or anyone older than you, you have to use a different dialect.”

One example of this is with the word “arigato”, which means “thank you.” In Japan, “arigato” is said to friends, and “arigato gozaimasu” is said to superiors or elders, Takase explains.

“In Japan, if you say arigato to someone older than you, they will be offended,” said Takase. “I explained to students the concept, but they don’t always use it. Sometimes, students still say ‘arigato’ to me, and I have to correct them.”

The hierarchy between professors and students is so strict that it is considered disrespectful for students to look at professors in the eyes. As a result of this hierarchy, Japanese students are much less confrontational than American students.

“When I first started teaching, students complained about tests,” said Takase. “In Japan, when you get a test back, that’s it. You don’t go up to the professor and ask questions about it. For the first couple of years, I wasn’t used to this. [But] now I really appreciate it.”

Takase said that students have a right to ask questions and receive feedback on grading. Unlike the professors of her homeland, Takase tries to interact with her students as much as possible and encourages them to approach her with questions.

“She’s always talking with us and answers every question,” said Sharafyan. “She cares for us. She’s a very supportive professor.”

Takase strives to make her class interactive and enjoyable, because she believes that a welcoming atmosphere will improve a student’s learning.

“It’s fun teaching here,” said Takase “I truly enjoy teaching at Pierce. I like [the student’s] energy because that really contributes to how I teach. I need reactions. If my audience is quiet, then my class or lecture won’t be fun.”

One of her longtime students, Connor Ferguson, said that Takase’s teaching style is fun yet educational.

“I’ve been with her four semesters,” said Ferguson. “This is my favorite class. Every day we interact with each other. She’s funny, and everyone here is having fun.”

Takase will be teaching a course next semester on Japanese civilization, which she hopes will further educate students on Japanese culture and history.

Takase has taught at five different colleges, including UCLA and USC. However, she said that Pierce holds a special place in her heart.

“Pierce is always my favorite,” said Takase. “Pierce students are very lively and I like that kind of energy. I’m so happy to be a part of Pierce.”